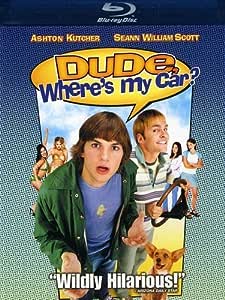 Two fun-loving slackers, Chester and Jesse, wake up after a night of partying with a burning question: "Dude, Where's My Car?" As they retrace their steps, these nitwits are in for the ride of their lives - encountering hot alien babes, dodging killer ostriches and trying to "score" special treats from their twin hotties.

4.6 out of 5 stars
4.6 out of 5
2,399 global ratings
How are ratings calculated?
To calculate the overall star rating and percentage breakdown by star, we don’t use a simple average. Instead, our system considers things like how recent a review is and if the reviewer bought the item on Amazon. It also analyzes reviews to verify trustworthiness.

Human Shield
5.0 out of 5 stars The smartest stupid movie I've ever seen: wall-to-wall fun and a masterpiece in the "dumb movie" genre
Reviewed in the United States on January 30, 2018
Verified Purchase
There's a lot I like about this movie. It has heart, and some likable and interesting characters, and it does a lot with a little. They seem to have set out to make a dumb movie that could be enjoyed with minimal brain-power expenditure, and they could have used that as permission to slack off and create something lazy that was momentarily entertaining and ultimately forgettable. Instead, they used the "dumb movie" premise as an excuse to completely ignore questions about plausibility and create an engaging plot that makes sense by its own bizarre logic. A lot of thought and heart went into this movie - it's the best dumb movie it could have been, and maybe the smartest stupid movie I've ever seen. Plus, it gets props for "we will now use the power of the continuum transfunctioner to banish you to Hoboken, NJ", which is a great out-of-context line.
Read more
3 people found this helpful
Helpful
Report abuse

Andrew Taylor
1.0 out of 5 stars Watch this if you wanna feel like Pineapple Express is Citizen Kane, and Superbad Casablanca
Reviewed in the United States on November 4, 2020
Verified Purchase
Reminds me of another phoned-in "stoner" movie, Ready 2 Rumble. As that only existed to promote bad minor league wrestling, movies like this seem to serve no other purpose than to promote the crappiest sub-Sublime recent signees to whatever music label owned by the parent company of the movie studio are. I only remember watching it back in the day, gave it a chance seeing it was 83 minutes, something I miss about the industry in general, but it was such torture it might as well have been Lawrence of Arabia-long. This movie really makes you appreciate the new direction this type of movie made in the Apatow era.

I mean, it essentially is the same plot as The Hangover, so its easy to compare and realize how far comedy evolved in a decade. And Hangover was made by the Road Trip guy, a vastly superior "one of these" by comparison, too. In fact, this movie doesn't just make me appreciate Judd Apatow and Ben Stiller and Will Ferrell screwball movies of the 2000s, or the Super Troopers and Office Spaces that bridged that gap, it makes me appreciate how much better even stuff like American Pie, Jay and Silent Bob, or Beavis and Butthead are to this, and its as insulting to bundle this also-ran in with them as it is for the algorithm to recommend American Dad and Simpsons Season 38 just because you watch Futurama.

Good thing this didn't ruin any careers, all these actors were very funny in a million other projects from Always Sunny, to Larry Sanders, to American Pie, to That 70's Show, to VH1's I Love the 80's, to Office Space, to Salute Your Shorts, and so on and so on.
Read more
Helpful
Report abuse

Micah
4.0 out of 5 stars This piece of crap REEKS of 2002.
Reviewed in the United States on April 15, 2020
Verified Purchase
If 2002 were a genre in the big book of humor, this would be one of the first items listed. It's obnoxious, it's stupid, it's perverse, and you can practically smell the weed in the script.

If you enjoy turning off your brain and laughing at some vulgar idiots just having some fun with a camera, you'll love this (and I mean that in a good way).
Read more
One person found this helpful
Helpful
Report abuse

Edward
5.0 out of 5 stars Classic with no redeeming social values
Reviewed in the United States on March 6, 2017
Verified Purchase
This is a silly roller coaster of sexual and physical gags that works with a great cast, Jennifer Gardner probably offered to have her name removed from the credits (cause of the movie not her performance as she is great), Chloe (from 24) is with the bubble rap freaks and all in all it is a disaster of movie that is upbeat and entertaining. Too many good bits thrown in together to count from "Sweeeet....Dude..." to "And Thennnnnnn..." and has become a cult classic.
Read more
2 people found this helpful
Helpful
Report abuse

Tony5150
5.0 out of 5 stars Fun collegiate humor!
Reviewed in the United States on August 3, 2019
Verified Purchase
This movie follows in the tradition of American Pie and other's. In addition to Sean William Scott and Ashton Kutcher, the film features fan favorite's Kristy Swanson, Jennifer Garner and Maria Sokoloff. If you like dumb humor you will love this movie.
Read more
Helpful
Report abuse

Rachael723
3.0 out of 5 stars Dumb but funny
Reviewed in the United States on March 6, 2020
Verified Purchase
Great if you like very dumb movies! Definitely some very funny scenes, but it’s very stupid for the most part.
Read more
Helpful
Report abuse

Amazon Customer
3.0 out of 5 stars No Case
Reviewed in the United States on December 20, 2020
Verified Purchase
I gave a 3 because the quality of the video is fine however, it didn't come with an actual case which was a bit disappointing.
Read more

3.0 out of 5 stars No Case
By Amazon Customer on December 20, 2020
I gave a 3 because the quality of the video is fine however, it didn't come with an actual case which was a bit disappointing.
Images in this review

Tommei Riccardo
5.0 out of 5 stars The movie of a lifetime.
Reviewed in the United Kingdom on February 18, 2015
Verified Purchase
I watched this one a few years ago with a friend of mine, and we've been quoting it ever since, especially when we're in a parking lot and we can't find his car (which actually used to be a Renault 5 like the one in the picture).
The film is full of hilarious lines, that are just as funny as they are silly. So, I just had to have this BR in my collection.
There are a couple of flaws: first of all, there are not many extras, just the theatrical trailer. The DVD had a lot of additional content (deleted scenes, commentary track, interviews...), so this BR version is really lazy. Fans of the movie should get both editions.
The biggest flaw is the fact that it's a Region A-locked disc (the Region B version is apparently existent, but very rare). So, what do you expect me to do, buy a Region A player from the States just for this disc?
....
OF COURSE I DID! Dude! Sweet!

james15
5.0 out of 5 stars Great
Reviewed in the United Kingdom on August 20, 2013
Verified Purchase
First watched this a while ago when it was on TV, and seeing the title I just had to watch it out of pure curiosity. I noticed it gets mixed reviews on here. If I'm honest, the plot is a bit weak. But it's so funny that I couldn't really care less how weak the plot is. The whole thing is just downright silly, mindless comedy from start to finish (I know that sounds negative but really isn't meant to be!) It works for me!
Read more
Report abuse