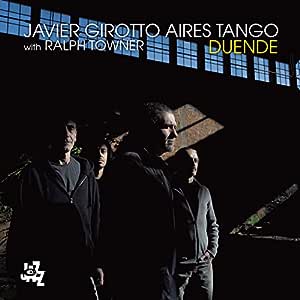 After twenty years of playing music together, an anniversary recently celebrated by CAM JAZZ with a commemorative box set, Javier Girotto & Aires Tango are back on track. And for the first time their number has grown to five. Indeed, their new album, Duende, also features the well-known American guitar player, Ralph Towner, who wrote half the tracks on it, allowing Aires Tango new sonic shades that intertwine into a wildly intriguing music. The six pieces by Towner regularly alternate with the six by Girotto, showing both the differences and many similarities in style between the Washington State-born musician and the Italian-Argentinian quartet. Duende opens with the title track by Towner. The guitarist's opening arpeggio is highlighted by Michele Rabbia's drums, as the other Aires Tango players gradually join in. Racconti in fuga is introduced by Alessandro Gwis on piano, who performs a stunning solo toward the end. In Origini, a rustling gramophone creates the opening for an amazing theme on piano and sax, then flows into Marco Siniscalco's solo on electric bass. Ralph Towner tests himself against Italian traditional music, specifically from Campania, giving rise to a fresh Tammurriata, where his classic guitar interacts beautifully with Gwis's piano. Listening is pleasant, as is always the case when you come across Girotto's rich, appealing melodies. Towner's contribution to the bandleader's pieces merges perfectly with Aires Tango's sound. A Breath Away and Chiaroscuro are further cases in point: in the latter track, the guitarist launches into a long solo, supported and highlighted very gently by the rhythm section of Girotto's quartet. Duende ends with Barrio Jardin, a highly impressive, melancholic piece vaguely evoking Fellini's world.

phoebus
5.0 out of 5 stars like me, you are waiting for a new Oregon ...
Reviewed in the United Kingdom on May 12, 2016
Verified Purchase
If, like me, you are waiting for a new Oregon recording, this may be just what the doctor ordered. It has the same intimate, chamber jazz feel and the standard of playing is jaw dropping. Ralph Towner has written half the tunes here but only appears on those tracks (unless he is well hidden in the mix elsewhere.) He is his usual brilliant self and his interplay with the rest of this wonderful band is a real treat.
Read more
Report abuse