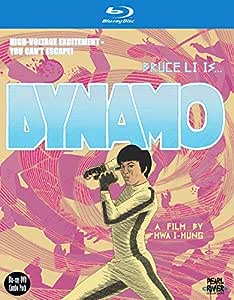 Various (Actor), Shan Hua (Director) Format: Blu-ray
4.6 out of 5 stars 20 ratings
Available at a lower price from other sellers that may not offer free Prime shipping.

victimblue
5.0 out of 5 stars The best Bruce Lee imitator of the 70s is here
Reviewed in the United States on June 6, 2020
Verified Purchase
Out of the countless Bruce Li movies made , Dynamo is one of the better films in his long list of brucexploitation films. What a great remaster. Its done with the most care with what they had and they did it well. In glorious widescreen and with 2 versions of the film here. In my opinion Bruce li only made 3 films that were stood out...The Stuntman, Bruce Lee the man the myth and then this classic Dynamo. These 3 films put Bruce Li as one of the best Bruce lee imitators of the 70s. The films were cheaply made and they all made money in the states during the brucexploitation boom. Its a damn shame Bruce li doesn't get the proper respect be deserves as he will always be remembered as one the fake bruce lee clones...but he was the best of them i tell you that. I think this remaster of Dynamo is the first step of respect he's received and i hope there are more in the future...the man the myth and stuntman will be another great addition....lets hope it can be done. In the meantime enjoy classic kung fu from the 70s Bruce li style in Dynamo.
Read more
3 people found this helpful
Helpful
Comment Report abuse

K Chiba
4.0 out of 5 stars Film School In A Box for Dynamo
Reviewed in the United States on May 18, 2020
If you are at all familiar with kung fu movies then you know Bruce Li. A reluctant replacement to the King of Kung Fu Bruce lee, this Bruce had to suffer through a number of Bruce Lee exploitation films to finally begin to come out on his own and make a handful of movies that to this day are well loved by fans. Dynamo is one of them.

This Blu-ray From the new label Pearl River is the best the film has looked. Probably will be the best it ever looks as this special edition blu offers not only a beautiful scope transfer of the 35mm film, but an alternate 16mm edited version that was possibly used for television broadcast. Several special features including a great audio commentary by actor and fan Michael Worth to help round this off into a film school in a box on Dynamo. Seeing these "redheaded stepchildren" of the Kung Fu genre (to borrow a phrase from the great The Clonescast Podcast) get the treatment as if it were a Criterion or Arrow Academy release is a huge blessing. You get the impression they are trying to include all they can with these films to give us the most complete release possible.

This line is beginning to look like the Arrow Academy of kung fu films which we sorely need. If you have any interest in collecting boutique labels or want the best possible version of this film, this is the edition to get! Comes with a small well written essay inside as well by Michael Worth.

Mark Turner
4.0 out of 5 stars BRUCE 2.0
Reviewed in the United States on June 6, 2020
With the passing of Bruce Lee in 1973 the loss of a major martial arts movie star left a hole and film companies rushed to fill that void. Called “Bruceploitation” films, there were numerous replacements all using variations on the spelling of his last name. Each one had his haircut, intense look and sculpted abs. Most successful among them was Bruce Li, born as Ho Chung Tao. He starred in numerous films using Lee’s name in the title from GOODBYE BRUCE LEE to THE DRAGON DIES HARD to BRUCE LEE SUPERSTAR and more. Among those titles was the film DYNAMO.

A favorite of the grindhouse circuit, DYNAMO was one of those films heard of but rarely released in a decent format. Released in 1978 the movie played those theaters non-stop for years. Now fans of the film and of the genre can enjoy it with a newly restored version of the film on blu-ray from VCI.

Unlike many martial arts films this one takes place in the present with an advertising company in Hong Kong. As two rival companies are competing against one another, a new manager named Mary is brought in to turn things around. As she is driven to her hotel she sees a huge crowd. Her assistant tells her that this is a funeral procession for the late Bruce Lee who has recently died and left fans longing for more.

Mary’s methods are cut throat to say the least and she soon has her team stealing back clients from the rival company. One day while heading to work she sees young cab driver Lee Tien-yee (Li) who takes on two men who stole a second cab. With decent martial arts skills she hires him with the intention of grooming him into the next huge movie star.

Here we insert one of the favorite type characters of the genre, the somewhat drunken master who is hired to bring this young star up from decent to amazing. Lee resents this new teacher (Feng Ku) when they start. Told to attack him whenever he wants, to surprise him even, Lee is consistently bettered by his teacher. As a result he too becomes better. Eventually a growing bond between the two takes place.

As Lee experiences newfound fame and fortune the rival company finds their lead lost. In an attempt to gain it back, they send various thugs to battle with Lee as he tours the world as the new superstar. Each one is beaten back until they eventually set him up to battle their main gun, a ruthless professional karate star. To ensure that Lee loses, they kidnap his girlfriend and threaten to kill her unless he throws the fight.

While this may sound like a ton of action, and there is plenty, more time is spent in the cutthroat offices and clubs with the advertising execs than you would expect. This film is definitely not lacking when it comes to a script full of conversations. In some ways it works, in others not. Yes, we have plenty of story but are we looking for that in a film like this?

Li is a competent replacement for the real Bruce Lee but can’t compare in the long run. He doesn’t have the speed or real charisma, instead relying on the similar look and style of the real deal. It did open the door for him though and gave him an opportunity to make movies. Even he felt this way, feeling that the studios underutilized him and saying "I could act like him but I could never be him." But he is among the better actors/marital artists who took on the daunting task of trying.

VCI has done a great job of bringing new life to this film, one that could have languished in bootleg and washed out editions on shelves everywhere. Instead they’ve attempted to clean it up with the best print possible, restoring it with a new 2k restoration from an original 35mm print. They’ve even included a 2k restoration of a 16mm alternate cut of the film. There are also plenty of extras to enjoy here as well. Those include an audio commentary track by filmmaker and kung fu film fan Michael Worth and UK radio sensation Iain Lee, “Kung Fu: Reborn” a featurette on the restoration of kung fu films, “Drawing Dynamo” a featurette of cover artists Ian McEwan, the original trailer and an essay by Worth.

If you’re a fan of martial arts films and of the entire Bruceploitation genre, then this is a must have. It offers a decent copy of the movie to enjoy as well as replace those washed out copies from the past. The film is also an historical look at the times in which it was released. Congrats to VCI for saving the film from extinction.
Read more
One person found this helpful
Helpful
Comment Report abuse
See all reviews

Makitoki
5.0 out of 5 stars Good buy!
Reviewed in the United Kingdom on September 21, 2020
Verified Purchase
If you follow Pearl River collection releases, you know this is their second official Bluray release, first being the kung fu classic The Leg Fighters (1980). Despite being a fan of Bruceploitation or not, the hard work Michael Worth and his team put into these releases should be rewarded. Looking forward to the next release and hope there's many to follow.
Read more
Report abuse
See all reviews