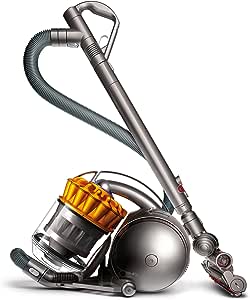 Airflow is channeled through the center of the assembly to improve flow efficiency, preserve air pressure, maximize suction and capture more microscopic dust.

Removes dirt and dust from every floor type

Built around a ball – light to pull, follows obediently

No awkward moves – Dyson Ball Multifloor follows you effortlessly around the home.

Dyson received the highest numerical score among canister vacuums in the J.D. Power 2015 and 2017 Vacuum Satisfaction Studies. 2017 study based on 6,965 total responses from 9 companies measuring the opinions of consumers who purchased a canister vacuum in the previous 12 months surveyed in February-March 2017. Your experiences may vary.

4.0 out of 5 stars
4 out of 5
542 global ratings
How are ratings calculated?
To calculate the overall star rating and percentage breakdown by star, we don’t use a simple average. Instead, our system considers things like how recent a review is and if the reviewer bought the item on Amazon. It also analyzes reviews to verify trustworthiness.

Monchichipox
1.0 out of 5 stars If you like a vacuum that gets clogged all the time this baby is for you.
Reviewed in the United States on November 13, 2017
Verified Purchase
I hate this vacuum with a passion. I can't wait until my new Hoover gets here and I can take this out in the middle of the street and smash it to smithereens with a hammer. First, it gets clogged EVERY TIME I use it. See where the hose connects to the machine? See that sharp curve? Every time I vacuum something gets caught there. It does next to nothing on carpets and the attachment it comes with doesn't work well on hard floors. I had to buy something extra for that. It's a pain in the neck to empty and reattach. I'm getting angry just typing this review.
Read more
33 people found this helpful
Helpful
Comment Report abuse

Ariel
5.0 out of 5 stars LOVE THIS VACUUM!
Reviewed in the United States on January 25, 2018
Verified Purchase
What can I say?!?! It's a Dyson! But no, seriously, this is my first every Dyson, and it is living up to its name already! Love how simple it is to use, and love it's suction power! We have this awful woven carpet in our house, and I thought my old vacuum was just not working anymore because I could not get the dog fur out of that carpet, no matter how much I vacuumed it... and even bought a new really nice vacuum and still couldn't get that dang fur out of the carpet! So my hubby bought this for me for Christmas, and it's a game changer, after just one use, it removed all the dog fur that had been weaved into that woven carpet and picked up so much extra dirt, that I was not only amazed but disgusted at how much filth had still been in the carpet that I couldn't even see or that my other 2 vacuums hadn't been able to pick up! Probably years of dirt and grime! Yuck! I picked the canister over the traditional ball vacuum because: 1. with the canister I don't have to worry about the hose later stretching out and not sitting in its correct place on the vacuum, 2. I am able to get under furniture more, 3. I can easily change the heads on the wand and do my walls and ceiling in a snap! The dispensing of the dirt is a breeze and unlike my old vacuum when I would oven the container and have dust fall out all over the floor, this one you unlock from the machine and then hold over the trash then clip the button to empty and it all goes straight in the trash without a mess! This also have a nice large bin so I am able to vacuum most of my house before I need to empty it. It also have a simple release to remove the brush from its spinner so that you can easily remove hair and string (which is a constant for anyone who has long hair) that has wound around the brush. It also has a very nice long cord and the wand has a built in extender making it easy for all different heights to use it comfortably and reach up into those high ceilings. I would definitely recommend this vacuum, I now actually enjoy vacuuming.
Read more
16 people found this helpful
Helpful
Comment Report abuse

LAF
2.0 out of 5 stars Issues outweigh the cleaning power
Reviewed in the United States on June 22, 2018
Verified Purchase
I needed a good all-around vacuum for rugs, floors, stairs, and furniture in a home with two dogs. Based on product claims and reviews, I thought this would be perfect. I must first say it picks up very well; dog hair, dirt sucked right up. It does better on rugs than solid floors. The main tool doesn't have a brush to clean dust, so an additional wipe-down after vacuuming is necessary on dusty floors. I've found three negatives, however, so my review is 2 stars. First the suction on rugs is almost too strong. The head sucks onto the rug and makes pushing it around very difficult. Standing with wand in the normal position, it is stuck in place. You have to bend down so wand is almost horizontal and push that way. It can be a back-breaker if you have much to clean at a given time. Secondly, the attachments are clipped to the wand, getting in the way and making it awkward to use. It's like they didn't think through how to attach them and they said "lets just stick them anywhere using a cheap clip." I've removed it and now have to keep track of where they are when I need them. The third issue is the real deal-breaker for me and the reason why I wouldn't recommend this product or buy it again. The dust container is ridiculous to empty. It is huge and you have to open clips and pull out parts in order to empty it. You end up having to put your hands into the dirt and spreading dirt all over by the time you're done. This was shocking to me the first time, because my previous machine had a cup you pulled out and tipped over like spilling a coffee cup. Clean and simple. This requires you to unlock the unit, carry the whole filtered system to the can, then unclip the bottom hinged cover. The hinged part flops down and collects much of the dirt that should be dropping in the can. But you're not done yet - there's a central filter that holds onto much of the dirt, so you have to unclip the entire canister sheath and pull that off so you can shake and brush the rest of the dirt off of the filter. I find that this sheath usually get stuck on the small bracket that holds it at the back, so I have to really pull and shove to get it off. By now your hands and kitchen floor are full of dirt. Then you're to clean and dry the parts before reassembling, which is another over-complicated process. I'd expect more from any $300 machine, but especially one with the Dyson name. I miss my LG machine!
Read more
9 people found this helpful
Helpful
Comment Report abuse
See all reviews

Tim Cross
5.0 out of 5 stars It's a Dyson!
Reviewed in Canada on November 21, 2019
Verified Purchase
It's a Dyson, need I say more?
Read more
Report abuse

David Holme
2.0 out of 5 stars Not impressed
Reviewed in Canada on December 29, 2019
Verified Purchase
Not impressed. Out of all the vacuums I’ve bought through my life the dyson is without a doubt the worst. The carpet power head is run by suction not a motor, so as a result the pipe gets covered in hair and dust from the static that is created. I’m constantly taking the power head apart because of the design of it, it constantly jams up with hair and I have the pet model. I would never buy a dyson again.
Read more
3 people found this helpful
Report abuse
See all reviews

Page 1 of 1 Start overPage 1 of 1
This shopping feature will continue to load items when the Enter key is pressed. In order to navigate out of this carousel please use your heading shortcut key to navigate to the next or previous heading.
Back
Next
Pages with related products. See and discover other items: dyson electronics, floor steamers for hardwood floors, hepa vacuum cleaners, small vacuum cleaner, stair vacuum, stair vacuums