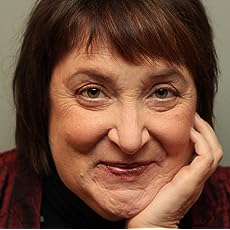 About E. A. Stewart 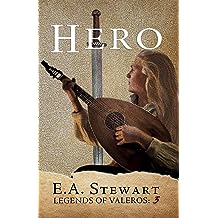 It’s hard to be a hero, even when it’s your job.
Chretien, the troubadour-warrior of Valeros, pursues a mysterious assassin wreaking havoc in Montpellier. It’s 1215, and a Church council seeks a peaceful end to the crusade against the Cathar heresy.

The Count of Roussillon pleads for Chretien’s help, claiming rumored assassination of Church leaders will create a dangerous future for all the lords of the Languedoc. Chretien’s family and friends are threatened by this rising chaos in Montpellier. While Chretien hunts the assassin, his nephew Yusuf begs his help to hide science books from his university library, protecting them from monks purging texts by heretics, schismatics, and Saracens.

Injured defending a tale-spinning orphan he never intended to rescue, Chretien endures endless stories of pirates and unlikely adventures. When a ghost sharing bad advice settles in as his inconstant companion, Chretien is saddled with burdens and responsibilities he must meet to protect his dead father’s honor. 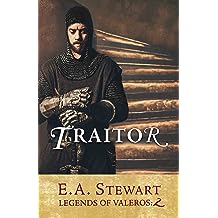 A mage-knight, a lost boy – and treachery

Orlando of Troyes, fight-master of knights’ sons in Carcassonne, awaits a promised reward from Simon de Montfort for his loyalty in the crusade against Cathar heretics. Impoverished and stranded in Carcassonne, Orlando believes in a knight’s duty, loyalty, and honor. Yet instead of a reward, Simon sends Orlando to plague local villagers with unfair taxes and riotous attacks, a quest that serves only Simon’s over-sized ambitions.

Soon Orlando is fighting a masked magical knight while finding new betrayals down every alley. Then strangers arrive in Carcassonne who beguile him with tales of his ancestors’ heroics—and ask him to undertake a greater test of loyalty and honor than he could ever imagine. There’s a lost boy, they say, and Orlando must rescue him or they all risk dishonor and death. 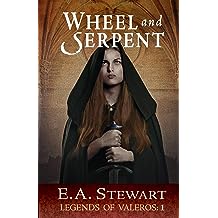 Wheel and Serpent (Legends of Valeros Book 1) Jul 21, 2017
by E.A. Stewart
$3.99
Taresa of Valeros longs to be a knight – if she survives
Can wit, second sight, and her lover’s third-best sword save Taresa of Valeros?

She has one task: Pedro of Aragon asked her to guide Yusuf, her scholarly brother-in-law, from Toulouse to Paris, serving as translator for the ways of Troubadour culture. Her own secret goal: to be made a knight when her chore is done.


But feral children rob them, a murderer at a Templar monastery frames them as rebels, and renegade heretic hunters arrive in the hills of the Languedoc. An enigmatic woman in crimson promises shelter but leads them into catastrophe. And then the Languedoc world falls into total chaos.


In times of madness, some strive for power and others run for shelter. A few do whatever it takes to save the innocent. Can Taresa protect her friends and her hopes when chaos reigns?
Wheel and Serpent launches new adventures and conspiracies amid the chaos of the crusade against the Cathar heresy in 13th century southern Europe.


Taresa of Valeros first appeared in the Accidental Heretics series when she traveled to Andalusia as a laundry woman in the Aragon army. In Book 1 of the new Legends of Valeros series, Taresa fights for her life in the face of an invasion that seeks to destroy the Languedoc way of life.
Read more
Other Formats: Paperback 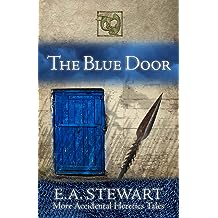 When Idren the hunter leaves his Atlas Mountains home to work as a mercenary in Andalusia, his grandmother warns that it’s his turn to change the world. Barefooted, with only a spear and a bow? For this stranger coming to a strange land in 1190, it seems ancient magic is needed to help an innocent hunter survive in this embattled new world.

The Blue Door, a prequel novella in the Accidental Heretics adventure series, is the life story of a Berber tribesman who came to fight for the caliphate in Iberia, in the same era that El Cid fought the Almoravid invaders.

This collection includes an additional tale from the Accidental Heretics world, “Peire and Miquel Go to Sea,” which recounts the initial meeting of two Catalan fighters when embarking a ship to join the Second Crusade. This collection also introduces Tomás of Morella, the great-grandson of Idren the hunter, in a preview from Bone-mend and Salt, Book 1 in the Accidental Heretics adventure. 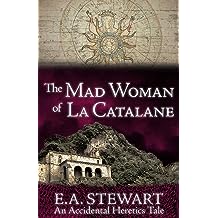 Isabella, the steward of Valeros in the eastern Pyrenees, has twice been falsely condemned as a heretic. In 1210, Isabella and Tomas, the mercenary she married, identified their archenemy: a secret society called Crux Lunata. At the siege of Minerve, Isabella narrowly escaped being burned with the town’s heretics.

In late summer 1211, Isabella and Tomas set out to join Pedro d’Aragon’s long-planned invasion of Andalusia. However, the Crux Lunata still pursue them, and Isabella flees for her life, seeking safety among the heretics hiding in caves in the hills.

The Mad Woman of La Catalane, a novella, supplements the story told in Crux Lunata, Book 3 of the Accidental Heretics adventure series, a saga of people caught in the invasion of southern France known as the Albigensian Crusade. 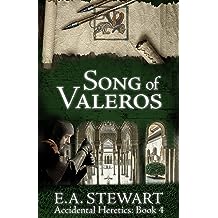 Heat shimmers on the Andalusian frontier.
Apparitions of saints manifest amid treachery and tragedy.
War drums pound, echoing up the valleys where Moorish farmers and Berber mercenaries stand ready to resist the Christian invaders. The starving armies of Castile and Aragon are unable to find a path into Andalusia.

The future of Europe is at stake, driven by the hope that old-fashioned honor can defeat evil ambition. Meanwhile, Tomas is spying deep in Andalusia for Pedro d’Aragon. Isabella of Valeros and a confraternity of Occitan knights gallop into a trap set by the Crux Lunata to destroy Pedro. What’s crucial for victory and safety?
A general’s pet djinni.
A Celtic soldier-troubadour.
A resurrected noble woman.
A monk, accidentally turned renegade.
A young Catalan soldier, battle-ready but lonely.
A Moorish mercenary, spying.
A heretic eager to get home.

Song of Valeros, Book 4 in the Accidental Heretic series, continues the adventure from Book 3, Crux Lunata. Valeros warriors race against time to join the Aragon army in Andalusia during the Reconquista in 1212. 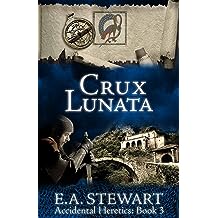 Down medieval alleys, across Andalusian rooftops.

Tomas, the mercenary, is sent by Pedro d’Aragon to disrupt the defense when Castile and Aragon invade Moorish Andalusia in 1212. There, some say Tomas inherited El Cid’s magical sword and demand he help his own clan. But destiny sends Tomas to meet his nemesis: a djinni.

While the armies gather, an ink-stained monk uncovers a plot by Crux Lunata, a secret order of knights. A confraternity of Occitan and Catalan knights undertake a dangerous journey to warn the king: Crux Lunata plans total destruction of Pedro and his efforts to unify the south.

The men and women of the confraternity risk their lives and their dreams to save Pedro. But will they instead burn on a heretics’ pyre? Or be flayed for spying? How to both fight and hide while Crux Lunata schemes to destroy all they love?

Crux Lunata, Book 3 in the Accidental Heretics series, young warriors from Valeros find treachery and new friendships deep in the spice-and-intrigue world of southern Europe during the Crusader era. 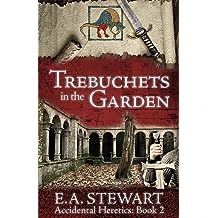 How do you rise up at the dawn of the Inquisition?
Pursued across medieval Languedoc by an unknown adversary, three unlikely companions join forces. Tomas the mercenary persists in his quest for revenge, but slashes deep wounds in his own soul. Jean-Luc, an exiled and heartbroken knight, searches for a man whose secrets might redeem him. Isabella of Valeros is falsely condemned for heresy, but to find her son, she must seek answers among the goodwomen, the so-called heretics beset by this new crusade.

Separated, exposed, and hunted, Tomas, Isabella, and Jean-Luc must find their relentless enemy before he destroys them—and their families. Meanwhile, Simon de Montfort’s army terrorizes southern Europe, flushing heretics from the hills, shouting over the voices of the troubadours.

Trebuchets in the Garden, Book 2 in the Accidental Heretics series, continues the adventure from Book 1, Bone-mend and Salt, where Tomas, Isabella, and Jean-Luc are entrapped in the Languedoc crusade, while Simon de Montfort prepares to ignite the next heretics’ pyre in the summer of 1210. This book includes maps and a glossary of Occitan and historical terms. 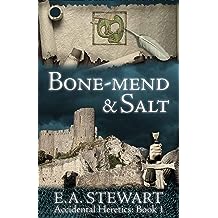 How to fight when enemies turn an unjust war against you?
BONE-MEND AND SALT, Book 1 in the Accidental Heretics series, launches an adventure of conspiracy and revenge amidst the crusade against the Cathar heresy in southern Europe in 1210.

A Moorish mercenary—mutilated and left to die, harangued by his father's ghost—seeks revenge, since justice is impossible. A French knight, banned as a Cain, longs for respite but must use his sword to battle his betrayers. A Catalan widow holds her own fate, until a gold-sniffing priest accuses her of heresy. A hidden enemy traps these three in a crusade that’s run amok.

Dreams of love and hope become impossible when destiny propels these three into a hazardous journey across the Languedoc, where Simon de Montfort is spreading terror to flush heretics from their lairs, shouting over the voices of the troubadours.

Bone-mend and Salt is the first book in the Accidental Heretics medieval historical fiction series, deep in the spice-and-intrigue world of southern Europe. This book includes maps and a glossary of Occitan and historical terms.