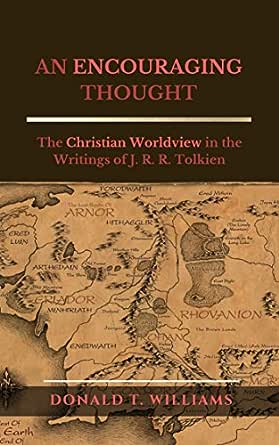 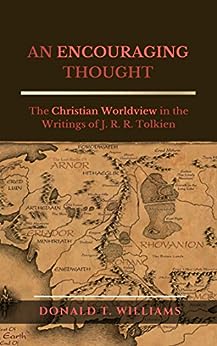 AN ENCOURAGING THOUGHT: The Christian Worldview in the Writings of J. R. R. Tolkien Kindle Edition

Donald T. Williams (BA, Taylor University; MDiv, Trinity Evangelical Divinity School; Ph.D., University of Georgia) is R. A. Forrest Scholar and Professor of English at Toccoa Falls College. An ordained minister in the Evangelical Free Church of America with many years of pastoral experience, he has spent several summers doing pastoral training in East Africa and India for Church Planting International. A past president of the International Society of Christian Apologetics and an internationally known Inklings scholar, he is the author of ten other books, most recently Deeper Magic: The Theology behind the Writings of C. S. Lewis (Baltimore: Square Halo Books, 2016), and of numerous articles, poems, and reviews in publications such as Christianity Today, National Review , Touchstone , Modern Reformation , Christian Research Journal , The Journal of the Evangelical Theological Societ y, Philosophia Christi , Christian Scholar's Review , SEVEN: An Anglo-American Review , etc. --This text refers to the paperback edition.

Robert Renteria
4.0 out of 5 stars Insight to the Imagination of Tolkien
Reviewed in the United States on March 3, 2018
Verified Purchase
Williams is well-versed in Tolkienese. He brings in depth perspective to the underlying treasures of Tolkien's Lord of the Rings writing and Tolkien himself. Williams does not make this a revealing of the deep mysteries within but the nature of the overall content. The how and why of Tolkien and his method to the wonderful world of Middle Earth is communicated. If you enjoyed the film adaptation of Peter Jackson's the criticism is rather strong. Jackson did take some liberties with the storyline that should be reconsidered. Nonetheless, Williams does attribute to Jackson the credit for a good representation of the Middle Earth realm and many of the differing entities. Overall Williams does not spoil the allure and mystique of The Lord of the Rings without bringing greater insight. He leaves great for a healthy exercise of the imagination of Tolkien's cosmos. A must for all serious Tolkien readers, a great aid for those just familiarizing themselves with Middle Earth.
Read more
2 people found this helpful
Helpful
Comment Report abuse

eaglegrafix
5.0 out of 5 stars If you are a Tolkinphile read this book - Read it even if you are not.
Reviewed in the United States on February 26, 2018
Verified Purchase
This book is first for the true aficionados of J.R.R. Tolkin and his books on Middle Earth. It is deep, yet easy to read. It brings forth and reveals levels of the book's meaning that this reader has never seen. Donald T. Williams has a perception into these writings that very few have. The one drawback, and it is not of this book, is that the movies (which we have viewed so many times) take a little bit from what we get. It may well be advised to read the books again and fix the proper and undiluted story in ones mind. At least keep a copy near by for reference because much was left out of the movies and much was tweaked by Peter Jackson which spoils the original power of the books.
Read more
One person found this helpful
Helpful
Comment Report abuse

P&T Bears
5.0 out of 5 stars Must read
Reviewed in the United States on June 29, 2018
Verified Purchase
Very good book and I think every Christian that loves the Lord of the Rings and Hobbit should read it
Read more
Helpful
Comment Report abuse

Timothy McGrew
5.0 out of 5 stars Williams's charming book provides a deeper insight into the worldview behind the Tolkien world
Reviewed in the United States on June 9, 2020
(Review by Lydia McGrew) Donald Williams's _An Encouraging Thought_ explains, in language that is simultaneously learned and unpretentious, the worldview that lies behind Tolkien's creative art in _The Hobbit_ and _The Lord of the Rings_. One of the best features of the book is Williams's own poetry scattered throughout. Like Tolkien's poems in LOTR itself, Williams's poetry is accessible while still showing real skill. I was especially impressed by the presence of various poetic styles including Anglo-Saxon alliteration.

One of Williams's virtues as an explainer of Tolkien is that he manages to discuss themes such as Christ figures and Providence without being overly "artsy" or strained, as one sometimes finds with those who write on Lewis and Tolkien. Williams does not seem to have the problem that "when you have a hammer, everything looks like a nail"--he explains what it means for a character to be a Christ figure in cases where that actually makes sense.

Williams spends time in his book showing how Peter Jackson's treatment of Tolkien in the LOTR movies is unintentionally at odds with Tolkien's worldview, a view of reality that Jackson didn't share and hence felt that he had to modify. Many of us who are the "real" Tolkien fans (which is to say, fans of the canonical versions of the stories in Tolkien's own work) have noticed the same things, such as Jackson's desire to "complicate" figures without being able to accept character like Faramir who apparently seemed to him to be too good to be true. I would add, as well, that many of us have actually *known* people who were truly honorable and would not consider taking the Ring from Frodo by force, so in that sense Faramir is actually realistic. No one should insist that realism requires making everybody struggle in the same way (e.g., with the temptation to take the Ring). And as Williams points out, the movie portrayal of Denethor is actually *less* complex and interesting than that of the books, since in the books Denethor has great nobleness, making his fall all the more tragic. Williams also shows how Tolkien is giving us a kind of "higher realism" by portraying characters who are ideals.

Thanks to Donald Williams for a work that manages to be both scholarly and sensible!

Douglas Groothuis
5.0 out of 5 stars An encouraging book
Reviewed in the United States on May 11, 2019
Oddly, I savored this study of a writer I have not read. I have tried. But, so far, I have failed. Dr Williams knows this, and we are still friends. I have read an essay by Tolkien and even quoted it in a book I wrote.

Nevertheless, I salute this book for its virtues of conciseness, wit, apologetic savvy, and curmudgeonly cheerfulness. The author is well read but not stuck up. I can now see Tolkien’s world from 35,000 feet—and I enjoy the fictional scenery.
Read more
One person found this helpful
Helpful
Comment Report abuse
See all reviews