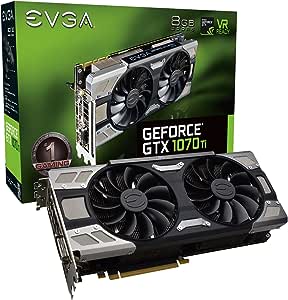 Dynamically maximizes clock speeds based on workload and allows enthusiast-class controls such as temperature target and fan controls, extra over-voltage headroom, and optimizations for water-cooling solutions. This allows gamers to push performance to new levels.

Take on today's most challenging, graphics-intensive games without missing a beat. The EVGA GeForce GTX 1070 Ti FTW ULTRA delivers the incredible speed and power of NVIDIA Pascal - the most advanced gaming GPU architecture ever created. This is the ultimate gaming platform. Featuring an all-new 2.5 slot cooler and Ultra Silent fan profile, the EVGA GeForce GTX 1070 Ti FTW ULTRA gives you the best of both worlds - Cool, silent running and game-changing performance! The larger heatsink efficiently removes more heat, which allows your fans to run at a lower and quieter speed. Alternatively, the improved cooling gives you more headroom to overclock and improve performance without worrying about heat. Take your EVGA GeForce GTX 1070 Ti to the next level with exclusive EVGA Precision XOC/EVGA OC Scanner X integration. With the click of one button, EVGA Precision XOC will detect, scan and apply your optimal overclock!. Operating System Support = Windows 10 32/64bit, Windows 8 32/64bit, Windows 7 32/64bit.

4.8 out of 5 stars
4.8 out of 5
718 global ratings
How are ratings calculated?
To calculate the overall star rating and percentage breakdown by star, we don’t use a simple average. Instead, our system considers things like how recent a review is and if the reviewer bought the item on Amazon. It also analyzes reviews to verify trustworthiness.

Danny
5.0 out of 5 stars Quiet and cool- no backplate
Reviewed in the United States on November 18, 2017
Style: SC BlackVerified Purchase
Runs quiet and very cool, ~50 degrees

Update: First card I purchased had bad coil whine and made a very annoying clicking noise when the fans ran at %56-58 which is exactly where they stayed under load. Upsetting, but amazon replaced it quickly and the new card runs fine.

Michael H
5.0 out of 5 stars EVGA did this one right
Reviewed in the United States on May 1, 2018
Style: FTW Ultra SilentVerified Purchase
Been using this card for a couple weeks and am happy to report that the card is fabulous and the larger heat sink works magically.

Knew going in that this beast was a three slot card and had no issue with that. What I was looking for was a powerful card with a beefy heat sink, exceptional cooling, and quiet fans, and this baby delivers.

Highest temp I have seen running Furmark was 67c in my Full Tower case, and with that low temp the cards fans were only spinning 960rpm. As most of you know a GTX 1070ti is a powerful card so no need to rehash that. Have not noticed any coil whine whatsoever.

Fans of EVGA who want a powerful graphics card but also value a cool running card with silence, your ship has come in.

DevHead
5.0 out of 5 stars Great Card
Reviewed in the United States on November 9, 2018
Style: FTW2Verified Purchase
My rig is entirely air-cooled in a full size tower. No heating issues on the card, even using stock case fans (gasp).

I play at 1080p only because I'm not gonna chase the 4k dragon. Only game I've had to drop settings on was GTA V, not terribly surprised on that (had to do a fair bit of tweaking b/c I kept getting freeze frames, but curse those shadows they were the culprit!), though if I felt like watercooling and overclocking I'd probably be able to keep it maxed. But I don't, so I don't.

If you're looking to play Skyrim special edition maxed (even with some higher res mods), Fallout 4 maxed, SC 2 maxed, D3 maxed, that sort of thing, and just on 1080p, I can attest that this card more than does the job. Just don't totally skimp on your processor and RAM so you don't bottleneck elsewhere.
Read more
12 people found this helpful
Helpful
Comment Report abuse

Melanie K.
5.0 out of 5 stars Great 1440p card
Reviewed in the United States on November 20, 2017
Style: SC BlackVerified Purchase
Great card, very quiet, overclocks to 2ghz with no issues. Expect stellar 1440p gaming. Battlefield 1 ultra settings 75-100fps, runs like a dream, doesn't go above 70c. I'm happy. Nice upgrade from a 970, that card wasn't really cutting it for 1440p, this one certainly does. (Although it took way too long to ship my pre-order)
Read more
36 people found this helpful
Helpful
Comment Report abuse

Amazon Customer
4.0 out of 5 stars Unbelievable amounts of power
Reviewed in the United States on June 17, 2018
Style: SC BlackVerified Purchase
I upgraded my GTX 1060 6GB to this card because I have a 1440p GSYNC. The 1060 isn’t enough for that resolution. I’m quite pleased with the performance and hope to keep this card for 3 years. It’s a better bargain than a 1080 since it can be overclocked to it. Great card!
Read more

Damien Beckham
4.0 out of 5 stars Best Value GPU, get it you will love it!
Reviewed in the United States on May 16, 2018
Style: FTW Ultra SilentVerified Purchase
Great Video Card, obviously I got it when video cards cost a kidney, so I don't like the price. But as far as performance, it's flawless.

Sound only gets loud when you overclock obviously, and even then doesn't get loud til the fan is boosted +65, so it's pretty awesome. Overclocked it's just as good as a 1080, so the best value for a video card atm in 2018 April, I would get one, if you can't wait til Fall.
Read more
10 people found this helpful
Helpful
Comment Report abuse
See all reviews

Rich
4.0 out of 5 stars basic 1070 ti
Reviewed in the United Kingdom on August 3, 2018
Style: SC BlackVerified Purchase
When I purchased the card I was on a bit of a tight budget; being a sc edition the card comes with no back plate whats a slight disapointment, the performance is good though, fans are quiet enough and the precision xoc will unlock more than enough performance nvidia don't want you to have.

My build the cards been running around 70degrees on full load and more than happy playing at 1080p. if you are on a budget it is worth looking at, but if you can afford a little more, try looking at the FTW or even the 1080.
Read more

Angela
4.0 out of 5 stars Great power, bad temps
Reviewed in the United Kingdom on January 6, 2019
Style: SC BlackVerified Purchase
As an upgrade was on the horizon, I decided to pick up the 1070Ti SC Gaming 8GB. After a simple installation process by sliding it into the PCI-E 8x port and installing the VGA cable, it was ready to work. I immediately ran tests on it and found that, at idle, it was 40C and 50C while gaming. It had good airflow and faced in all the right directions. Overall, it's great for 1080p gaming and even VR but it runs really hot compared to the 1050Ti.
Read more
One person found this helpful
Report abuse

Reviewer man
5.0 out of 5 stars It's more than enough to handle 1080p at or over 60 fps on most games at high/ultra
Reviewed in the United Kingdom on May 27, 2019
Style: SC BlackVerified Purchase
Works great, plays alot of games. If you are looking for a card to enter the high end this is your best start. Can overclock to performance of a 1080 but you dont need to I find the vram is by far more than enough and standard clock speed performs really well. I have had some frame issues but that is mainly down to the CPU bottleneck I've encountered.
Read more
One person found this helpful
Report abuse

Alex G.
4.0 out of 5 stars Worth the money
Reviewed in the United Kingdom on February 3, 2019
Style: SC BlackVerified Purchase
Very powerful card, handles VR with ease. Only gripe is electrical whine - but this is VERY rare. Only one or two games have any. Once or twice I've heard something like the fan bearings clicking or rubbing at very high RPM but it only last a second or two. Overall it's worthy buy.
Read more
One person found this helpful
Report abuse

Claire
5.0 out of 5 stars Just Something About Minesweeper
Reviewed in the United Kingdom on September 16, 2018
Style: SC BlackVerified Purchase
Cant Run Minesweeper but can run everything else.
Read more
2 people found this helpful
Report abuse
See all reviews

Page 1 of 1 Start overPage 1 of 1
This shopping feature will continue to load items when the Enter key is pressed. In order to navigate out of this carousel please use your heading shortcut key to navigate to the next or previous heading.
Back
Next
Pages with related products. See and discover other items: Best graphics cards for gaming, Silent Gaming PCs, ge force gtx, ultra ssd, 2070 ti graphics card, silent gaming case