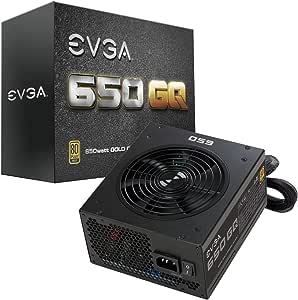 Introducing the latest in the EVGA Power supply line-up; The gq series. These power supplies take some of the best features from EVGA award winning power supplies, like EVGA eco fan mode for near silent operation, Japanese capacitor design and a highly efficient design, at an excellent value. These new power supplies are 80 Plus Gold rated and offer an outstanding 5 Year that's backed By world class EVGA Support.

4.8 out of 5 stars
4.8 out of 5
1,211 global ratings
How are ratings calculated?
To calculate the overall star rating and percentage breakdown by star, we don’t use a simple average. Instead, our system considers things like how recent a review is and if the reviewer bought the item on Amazon. It also analyzes reviews to verify trustworthiness.

A J
2.0 out of 5 stars Do not re-use cables
Reviewed in the United States on December 13, 2019
Verified Purchase
The power supply is quiet and installed easily. There are plenty of connectors, including old style molex, and they are wrapped up in velcro. Connection names are clear on the cables - not so much on the power supply (Grey on Black).

I did have one major issue though EVGA and Corsair (and probably other manufacturers I've not used) have Modular Power Supplies with cables that are physically compatible, but NOT electrically compatible. i.e. You can plug in an EVGA cable to a Corsair power supply (as I did because I didn't have a molex cable for my old Corsair), but the system will not boot. Anecdotally (see google) you may be unlucky and fry things. So this "review" is mainly a public-service-announcement for anyone who has more than one vendor's power supplies.

As to why with all the keying possibilities Vendors can not be either physically incompatible or use a common standard - you'd have to ask them.
Read more
4 people found this helpful
Helpful
Report abuse

Matt
5.0 out of 5 stars Great PSU for a 2070 super.
Reviewed in the United States on January 27, 2020
Verified Purchase
Has a nice eco mode switch that lets you tone down power usage during idle if you're someone concerned with that. Was packaged nicely, had plenty of cables and pleasantly came with some nice Velcro straps to use in you're build.

I've overclocked and cranked up everything and this power supply handled it fine.

The reason I only gave 4 stars on Ease of Installation is because the instructions leave a lot to be desired. I had no problems but I've installed a lot of PSU's. Someone on their first build would benefit from a more idiot proof set of instructions about installation.

I will update about durability if I find any issues, but I don't foresee that.
Read more
2 people found this helpful
Helpful
Report abuse

The Davenport Family
1.0 out of 5 stars Fuses failed to work, new system fried
Reviewed in the United States on January 10, 2019
Verified Purchase
Bought this power supply for a i5 build on an new MSI mobo. The PSU was bad and *melted* all the SATA cables. It also fried a $700 GTX-1060 video card and the MSI mobo. This PSU should have better safety features. I've been building PCs for 20 years, have worked in IT data centers my entire career, and I've never had a PSU go bad like this. That's what fuses and breakers are for! Chalking this up to manufacturer defect - perhaps I just got a terrible unit?
Read more
7 people found this helpful
Helpful
Report abuse

K. Crawford
4.0 out of 5 stars Great for silent operation other than odd clicking sounds for first few minutes
Reviewed in the United States on April 19, 2018
Verified Purchase
I set out to make a "nearly" silent PC, in that I didn't want to go fanless, but I wanted it to have the fans running so slowly (or off) during normal operation that it was silent, and it was only during intensive activities that the fans would ramp up. After I got up off the floor from sticker shock of truly fanless PSUs, I read the engenius idea of buying an "eco mode" PSU and make sure that 40% of the PSU is more power than you need. Then, the PSU fans never come on. Genius!

The only caveat, and the reason I give this PSU 4-stars instead of 5, is when I first turn on the system, there is this quiet but noticeable clicking sound coming from the PSU. It sounds like there is another smaller fan inside the PSU that is bumping into something (I'm not saying that's what's actually happening, just what it sounds like). The noise level is less than the fan would make if it were on, or if I used a cheaper PSU like the Bronze 80+ 450 that I have in another system. But for someone going for near-silent, it is very noticeable.

The good news is that something about the PSU warming up makes the sound go away. So just a minute or two after the system turns on, the sound goes away. If you're like me and you leave your system on 24x7, this is a silent PSU when in eco mode and keeping it below the fan threshold. My system should only use about 250 watts according to online calculators in all but the most intensive situations, so I expect it to stay that way. The only time I ever hear anything out of this PSU is when I have to shut the system off to replace a component or something (note: a reboot won't cause it as the PSU stays warm).

But the long and short of it, is that with this PSU, a good CPU cooler, good fans on all the components and leaving the front of the case fan off unless the system gets hot (trying to save a few bucks and not replace the 12" fan unless I need to) I have a truly silent PC, where a pretty sensitive dB meter can not detect it being on. I have to do the test in the middle of the night, because even cars going by outside are detectable. But at 3 AM, it reads 21.1 dB with the PC off and 21.1 dB with it on. My stomach gurgles and the stupid thing goes up to 24 dB or I click the mouse and it goes up to over 30 dB so trust me when I say the dB meter is sensitive enough to detect pretty small readings.

To be fair and give a caveat, to keep it silent, the fans are running at 13% on the rear of the case, 10% on the CPU and 5% on the GPU. But that's just enough air flow with the good heatsinks that in normal operation the system temp stays around 40 and both the CPU temp and GPU temps stay in the mid 50's.

Chris S
5.0 out of 5 stars Excellent PSU for the money
Reviewed in the United States on June 9, 2019
Verified Purchase
Likes: great value and excellent quality. Semi-modular is really the way to go, no need for full (unless you really require it for whatever reason) and definitely better than non modular.
Is whisper quiet. I got this to replace the low quality PSU in a pre-built and the sound (and quality) difference is telling.

Cons: don't like that so many of the connections are split, makes it difficult to plug this in tight spaces and can make for a less attractive build. They plug into the psu just fine, but they were pretty tight going into the motherboard, though that could be the motherboard and not the connectors. Cables are also a bit stiff and are bent unattractively out of the box, I suggest getting them out and trying to straighten them before installing.

Antoine Brunelle
5.0 out of 5 stars Really good
Reviewed in Canada on October 2, 2018
Verified Purchase
Nothing bad to say really, this psu rocks.

5.0 out of 5 stars Really good
Reviewed in Canada on October 2, 2018
Nothing bad to say really, this psu rocks.

Joseph Sullivan
5.0 out of 5 stars Insane power efficiency means saving me $150/yr
Reviewed in Canada on November 23, 2017
Verified Purchase
Holy cow I am so glad I picked a "GOLD" rated PSU. My old PSU was not a cheap one by any means, but it was only "bronze". After putting this in my new PC and reading about how "gold" means power efficiency, I decided to buy a cheap watt meter to test it out. My old computer was using 120 watts, just from sitting at the desktop, idle. My new PSU now uses only 30 watts on desktop idle. And it's definitely the PSU - once I start up some games and get the CPU and GPU running, it's about the same as the bronze PSU. But during idle? It's a massive difference. And I did the math - because I leave my computer turned on 24/7, this PSU's extreme power efficiency is going to pay for itself in 6 months, and save me $150/yr!
Read more
Report abuse

Ryan T
5.0 out of 5 stars great PSU
Reviewed in Canada on July 28, 2019
Verified Purchase
got this for 109, so it was a no brainer. I also bought a 650 G3 for a friend, comparing the two, the cables here aren't as nice, they are the plasticy style, where as the G3 has those nice fabric cable shielding. Otherwise this thing is whisper quiet and im super happy with it
Read more
Report abuse

Rachel D
5.0 out of 5 stars MY PC HAS NEVER BEEN SPICIER
Reviewed in Canada on January 8, 2019
Verified Purchase
Great! Works fine, I just had never installed one before so Youtube was a little more helpful as a guide than the included booklet!
Running an i7 4790k, MSI Gaming X 1080ti, and both a 1440p (Acer Predator 24") and 4K (Wacom Cintiq Pro 24) with zero undervolting issues recorded so far. Just the right amount of zap for my buck! 💪🏻
Read more
Report abuse

JSA
5.0 out of 5 stars You can buy with confidence!!!
Reviewed in Canada on February 13, 2020
Verified Purchase
Evga power supplies are reliable ,well made and is a brand you can trust!
It’s my second Evga power supply and the next will probably be an Evga !
Read more
Report abuse
See all reviews

See all deals
Page 1 of 1 Start overPage 1 of 1
Previous page
Next page
Pages with related products. See and discover other items: computer supply, Best Rated in Computer Internal Components, one plus 7 pro cases, Ryzen 7 Motherboards, cpu ryzen, ryzen motherboards
Back to top
Get to Know Us
Make Money with Us
Amazon Payment Products
Let Us Help You
EnglishChoose a language for shopping. United StatesChoose a country/region for shopping.
© 1996-2021, Amazon.com, Inc. or its affiliates