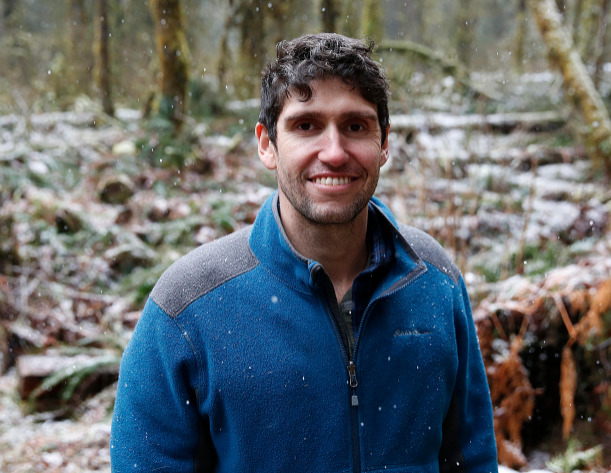 Eager: The Surprising, Secret Life of Beavers and Why They Matter Paperback – March 8, 2019

“Written with clarity, intelligence, and humor, this engaging book will appeal to basically everyone.”―Forbes

“Eager takes us inside the amazing world of nature’s premier construction engineer…and shows us why the restoration of an animal almost driven to extinction is producing wide-ranging, positive effects on our landscapes, ecology, and even our economy.”―National Geographic

"Impressively researched, charmingly written, absolutely persuasive book. . . .Goldfarb makes his argument with a quiet power and deceptively breezy writing that paints a vivid picture of how the various inhabitants of the natural world rely on one other. Take one vital piece out and the whole thing could collapse."―The Seattle Times

"This book lodges itself among the ranks of the best sort of environmental journalism.”―The Boston Globe

“Eager is a passionate, captivating love letter to the beaver.”―The Christian Science Monitor

“Engrossing and elegantly written…. Within its wide scope, Eager includes nuggets sure to make you the most fascinating conversationalist at your next party.”―Scientific American

“A revelation! If we only let them live, beavers are the solution to many of our nation’s ecological problems. . . . Goldfarb’s wonderful book might just tail-slap a politician or two into realizing how much we need them to restore our critical wetlands.”―Sy Montgomery, New York Times bestselling author of The Soul of an Octopus

“This witty, engrossing book will be a classic from the day it is published.”―Bill McKibben, author of The End of Nature

“European settlers who cut, plowed, and shot their way west also trapped the country nearly clean of mammals. . . . Now, though, beavers are on the rebound, and the how and who of that story, as told in Eager, will give you a new and completely different concept of the continent.”―Carl Safina, New York Times bestselling author of Beyond Words

Ben Goldfarb is an award-winning environmental journalist who covers wildlife conservation, marine science, and public lands management, as well as an accomplished fiction writer. His work has been featured in Science, Mother Jones, The Guardian, High Country News, VICE, Audubon Magazine, Modern Farmer, Orion, World Wildlife Magazine, Scientific American, Yale Environment 360, and many other publications. He holds a master of environmental management from the Yale School of Forestry and Environmental Studies and is a 2018 North American Congress for Conservation Biology journalist fellow.

Start reading Eager on your Kindle in under a minute.

4.7 out of 5 stars
4.7 out of 5
219 global ratings
How are ratings calculated?
To calculate the overall star rating and percentage breakdown by star, we don’t use a simple average. Instead, our system considers things like how recent a review is and if the reviewer bought the item on Amazon. It also analyzes reviews to verify trustworthiness.
Top reviews

Heidi Perryman
5.0 out of 5 stars I have a lot of favorite parts to this book
Reviewed in the United States on June 28, 2018
Verified Purchase
Every now and then a well-written and cheerfully-researched book comes along that changes the conversation forever. Suddenly no one is asking whether DDT is harmful or we didn’t do enough to prevent 9/11, they are just discussing what to do about it now and where to start first.

This might just be one of those books. With Eager: The surprising secret lives of beavers and why they matter, accomplished author Ben Goldfarb lays out a Michener-esque sweeping look at an America that was burrowed, shaped and watered by beavers. He uses a convincing cast of characters to tell this compelling story – characters as varied as they are persuasive. From the “high-spirited and freckled” fluvial geomorphologist Rebekah Levine in Montana, to the “geyser of colorful catch phrases” Joe Wheaton in Utah, or the fish biologist with the “gentle manner of painting instructor”, Carol Evans of Nevada, each tell their part of a highly relevant ecological drama that we never even realized we were waiting for.

I have a lot of favorite parts to this book, but an enduring winner is the unparalleled illumination Ben shines on a pre-settlement America when beavers and their dams were everywhere and complex interlacing streams looked more like ‘a bowl of spaghetti’ than individual channels due to their ubiquitous work – my most stark and unfavorite part is similarly unforgettable – the devastating near apocalyptic impact that the fur trade had in drying our national landscape.

Besides introducing the reader to beaver believers from every walk of life all over the country and beyond, and stacking the courtroom with deftly-delivered scientific arguments from every field, Goldfarb is a careful archeologist who unearths historical passages that introduce a new understanding of past figures and their thoughts about a beaver-made country. Like a special lens attached to a telescope, his writing becomes a prism through which beavers shape our past, our present and our future.
Read more
57 people found this helpful
Helpful
Comment Report abuse

Max Lambert
5.0 out of 5 stars Truly an American story and a great read for every kind of person out there.
Reviewed in the United States on July 8, 2018
Verified Purchase
For transparency, I've known Ben Goldfarb for the better part of a decade and have enjoyed his journalistic writings about everything from shellfish to Yellowstone. But this book is something else!

I have a bachelor's degree in wildlife biology and a PhD in aquatic ecology. I know quite a bit about beaver biology and, when Ben first mentioned he was going to write a book all about beavers, I was pretty skeptical that he could fill 250 pages with beaver information that would be interesting and approachable to a broad audience. And I was dead wrong.

Every page is filled with phenomenal information about this crazy critter and is written in a humorous and captivating narrative. This book is unique because it doesn't tease apart the story of the beaver into chapters focused on ecology, evolution, and human-beaver interactions. Rather, Ben has weaved these components together to paint a holistic picture about beavers, illustrating the remarkably diverse interactions between this species' biology and the history of the North American landscape, both geologically and culturally. Perhaps most fascinating is the narrative Ben develops through interviewing all kinds of people from living beaver trappers, landscape managers, and academic scientists - all of whom are compelled in some way by this rodent.

I've learned orders of magnitude more about beavers than I ever thought there was to know. If you're interested in American history, geology, natural history, culture, or are just a curious person - this book is for you.
Read more
46 people found this helpful
Helpful
Comment Report abuse

Shelley Y. Rose
5.0 out of 5 stars Eager is engrossing, enthralling, engaging
Reviewed in the United States on July 22, 2018
Verified Purchase
Count me among the newly minted Beaver Believers, thanks to this surprisingly accessible book about a much-misunderstood rodent. Goldfarb, in Eager, tells us relatable stories about the paddle-tailed aquatic engineers, their foes, and friends. Leave it to us humans to come to a new land, claim dominion over its flora and fauna, drive much of it to the brink of extinction, and only later recognize the impact of those brutal acts and seek to rectify them. Although Eager deals primarily with the history, contributions, plight, and attempted restoration of the Castor canadensis (and European cousin Castor fiber), the reader will be reminded of what happens when an invading species (in this case, Man) eradicates a perceived foe then is forced to live with unforeseen consequences that are far greater than the imagined threat.

The author, through the use of lively storytelling based on exhaustive research, introduces us to Castor canadensis, its history here in the US and across the pond, its overhunting for English and European hats and coats, which become unfashionable after the beaver population has already been decimated, its attempts to survive only to be regarded as a varmint whose value to rivers, streams, and water is not understood well enough to shield it from farmers' and ranchers' bullets and traps. As with any good story, this one has conflict, desire, greed, altruism, sex, love, death, politics, interesting characters, and a good measure of humor. Not what you'd expect from a book about beavers, is it?

I agree with environmentalist and author Bill McKibben who said of Eager, "This witty, engrossing book will be a classic from the day it is published." Eager is timely and timeless - an especially important read today as much of the world deals with drought and seeks solutions to dwindling natural resources, for which the beaver, a keystone species that supports entire biological communities, embodies tremendous potential to aid those who would vanquish it.
Read more
21 people found this helpful
Helpful
Comment Report abuse
See all reviews

Mrs Anne Barnes
5.0 out of 5 stars Lovingly written account of the beaver and environment.
Reviewed in the United Kingdom on September 3, 2018
Verified Purchase
I absolutely love this book. If you are at all interested in beavers, it is a must. Even if you are not, the descriptions of the environmental advantages of a ‘beavered’ landscape will convince you. Beautifully written with lots of useful references.
Read more
One person found this helpful
Report abuse

William Tapp
5.0 out of 5 stars Eologically essential reading
Reviewed in the United Kingdom on October 6, 2018
Verified Purchase
A most significant and enjoyable read. It should be put in front of every politician who cares about the future of the planet.
Read more
Report abuse

Prw Ramsay
5.0 out of 5 stars Excellent work from Ben Goldfarb!
Reviewed in the United Kingdom on January 19, 2019
Verified Purchase
This is an excellent book.
Read more
Report abuse

Hawkmoon100
3.0 out of 5 stars Repetitive
Reviewed in Canada on January 22, 2020
Verified Purchase
Should have been a meaningful infographic. This was a thin gruel that should have been a substantial meal.
Read more
Report abuse

Amazon Customer
5.0 out of 5 stars Good book to have in the library
Reviewed in Canada on June 9, 2019
Verified Purchase
Good book.
Read more
Report abuse
See all reviews