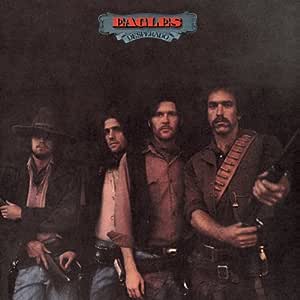 Secure transaction
Your transaction is secure
We work hard to protect your security and privacy. Our payment security system encrypts your information during transmission. We don’t share your credit card details with third-party sellers, and we don’t sell your information to others. Learn more
Details
Ships from
Amazon.com
Sold by
Amazon.com
Return policy: This item is returnable
In most cases, items shipped from Amazon.com may be returned for a full refund.
Read full return policy
Eagles - Desperado has been added to your Cart

Save with Used - Very Good
$6.75
FREE delivery: Tuesday, April 27 on orders over $25.00 shipped by Amazon.
Ships from: Amazon
Sold by: Benjamins Bookshelf

If ever a group of musicians had a clear vision of where they wanted to go and how to get there, it was these southern California boys who built a steady rolling FM hit factory on basic tenets of Gram Parsons's invention of country-rock. For their second album, the group decided concept was most important and set out to portray themselves as keepers of the old West--their outlaw image a natural for those born unto rock and roll soil. The hits are lazy, decadent, and unrepentant; "Tequila Sunrise" and the title track, feature the flawless harmonies and strong vocals of Glenn Frey and Don Henley. --Rob O'Connor

4.8 out of 5 stars
4.8 out of 5
767 global ratings
How are ratings calculated?
To calculate the overall star rating and percentage breakdown by star, we don’t use a simple average. Instead, our system considers things like how recent a review is and if the reviewer bought the item on Amazon. It also analyzes reviews to verify trustworthiness.
Top reviews

Mag Wright
5.0 out of 5 stars THE BEST. EVER.
Reviewed in the United States on February 20, 2016
Verified Purchase
This is their best, most creative album. I never get tired of it. Every song is so well-crafted and beautifully-produced. I recently watched their documentary and I cannot believe that it "bombed" when it came out. That's crazy! I bought it immediately---I was in high school and they were my favorite band (still are)--and I played it constantly. It holds up well, too. To me, this exemplifies the Eagles--the whole California vibe, the country rock thing, Their image will always be, for me, tied to this album. I love how Jackson Browne and JD Souther are actually in the photograph on the back of the album, as outlaws! I really miss Glenn Frey and hope others give this CD a listen and appreciate the genius that was the 70's Eagles. I love their other stuff too, but this is the pinnacle, for me. It was good to see them on the Grammys as a tribute to Glenn, with Bernie Leadon, too, and Jackson, but it seemed like CBS really messed it up, production-wise.
Read more
22 people found this helpful
Helpful
Report abuse

Gan S. Libisono
VINE VOICE
5.0 out of 5 stars Excellent pressing ... if you get the good one
Reviewed in the United States on June 21, 2020
Verified Purchase
This review is for the quality of vinyl pressing, not for the album itself. The record that I got is quiet, heavy and has
excellent sound. This is one of the quietest record that I have. Generally, the Eagles record sound excellent. I have both greatest hits, Hotel California, On the Border, Desperado and Hell Freezes Over. They all sounds wonderful. However, this is the second Desperado that I got from Amazon. The first one clicked and crackled as soon as the first song was playing. Luckily, I made the right decision to request for a replacement and Amazon has been very generous about it. So, if you like the Eagles, I would highly recommend the album. Greatest hits is great, but listening to a whole album gives a better representation of the band in general. This one is no exception.
Read more
Helpful
Report abuse

Robert Clark
5.0 out of 5 stars Very Happy
Reviewed in the United States on January 12, 2021
Verified Purchase
Nice pressing of a great album! Contains one of the Eagles’ most popular songs, Desperado. This album is themed around that song and the highs and lows of the infamous Doolin-Dalton gang. This is a turn off for some Eagles fans, but I have always loved this album, Mostly, it shows off the instrumental skills of the group, on a variety on instruments. Plus, you have Desperado, Tequila Sunrise, Outlaw Man, included here. 180 gram vinyl, and no complains from me on the remastering or pressing. My copy is practically flawless!
Read more
Helpful
Report abuse

Mark J. House
5.0 out of 5 stars Eagles in the Old West
Reviewed in the United States on April 7, 2015
Verified Purchase
This is an album that is also a musical concept. This collection tells the story of a man in the Old U.S. West who is always on the run and likes it a little too much. Songs like Doolin' Dalton, Twenty-One, Out of Control, Tequila Sunrise, Saturday Night, Outlaw Man, Bitter Creek, and of course, Desperado, all deal with the life of a man on the road his whole life. Call it Old West, call it Americana, call it what you want to; this is good classic rock with some SERIOUSLY mellow tones at times. This is a favorite of most Eagles' fans and you just might agree. Try it!
Read more
10 people found this helpful
Helpful
Report abuse

Jonathan Weller
5.0 out of 5 stars Simply put...a masterpiece
Reviewed in the United States on October 20, 2012
Verified Purchase
Released just a year after their debut album, "Desperado" is a continuation of what the Eagles did better than anyone, make country rock for the masses. On this album the Eagles took the next step and made one of the greatest rock albums of all-time!

"Desperado" is my all-time favorite Eagles record. Every song on here is a winner, and could have very easily been a radio hit in the early 70s'. The song writing on this album is also first-rate and it shows just how talented the guys in this band would become. Songs like "Outlaw Man", "Outta Control", "Doolin' Dalton" and "Desperado" are highlights, however, you'd be hard-pressed to find any duds on this baby.

This album is absolutely terrific as it was, but when it was remastered and re-released it made an awesome record even better! I suggest if you like the Eagles, or anything from the 70s' you give this album a shot. No way you won't love this monster the whole way through!
Read more
7 people found this helpful
Helpful
Report abuse

Denise
5.0 out of 5 stars Desperado: My favorite album ever; a must for anybody that digs music done to Perfection
Reviewed in the United States on November 15, 2013
Verified Purchase
Oh...Desperado by far my favorite release from the Eagles (though I adore them all). Considered a 'bomb' according to Glenn Frey himself in the fantastic documentary 'History of the Eagles', I can't imagine a world without these stunning masterpieces. I got to see them live 2 nights ago in the 2nd row in Tenn (I flew out there from Los Angeles JUST to see them) and thankfully they showered the crowd with tracks from their sophomore release, including opening their show with the lovely 'Saturday Night', followed shortly after with my Favorites 'Doolin-Dalton' and a Stunning Reprise of 'D-D/Desperado', with the imcomparable 'Tequila Sunrise' sandwiched in between ~ Absolutely Sensational. Randy Meisner's 'Certain Kind of Fool' is a fantastic track and thank goodness, featured in their doc 'History of the Eagles'. My Absolute Favorite is Glenn Frey's 'Outlaw Man' (the lyrics are a lot the way I actually think and am, the composition is genius). Then there's the legendary 'Desperado' which is, rightfully so, their last encore performed on their current tour.
Denise Ames, Los Angeles
Read more
6 people found this helpful
Helpful
Report abuse

Tom
5.0 out of 5 stars Great album
Reviewed in the United States on June 4, 2019
Verified Purchase
Came cracked, but with the skills of replacing the innards with a good cd case made it as good as new. I love this album and the sound quality was great.
Read more
One person found this helpful
Helpful
Report abuse

DAVID BRADDY
5.0 out of 5 stars A magical and mystical journey
Reviewed in the United States on September 11, 2017
Verified Purchase
This is one of the best vocal and instrumental music in the world. It is a superb combination of country and rock, and an amazing story is being told through the album. I fell in love with it in the 1970s and have listened to it from record to cassette to CD and now downloaded on my I-phone and computer. I cannot imagine anyone not appreciating how these guys are able to connect with your very soul, especially the male human beings of America. It is magical and mystical.
Read more
3 people found this helpful
Helpful
Report abuse
See all reviews

Thomas Stanners
5.0 out of 5 stars DESPERADO.
Reviewed in the United Kingdom on May 18, 2016
Verified Purchase
Everybody and there dog owns a copy of Hotel California but the jewel in the Eagles crown is Desperado..Quite simply 1 of the best albums ever made,this and the Original Greatest hits,you can't top them..MAGNIFICENT
Read more
5 people found this helpful
Report abuse

Gary
5.0 out of 5 stars Outlaw Man
Reviewed in the United Kingdom on February 14, 2017
Verified Purchase
Wow when I first heard this many years ago it was something completely new to me as a teenager in the UK. My preference has always been for American bands (with a couple of exceptions). This always reminded me of the cowboy scene with rock/folk songs and don't think there has been anything done similar. Some great soft rock which explodes into some really rocking songs-one of the Eagles best/
Read more
Report abuse

Let There Be Drums
5.0 out of 5 stars Before they went Hollywood
Reviewed in the United Kingdom on March 16, 2013
Verified Purchase
Fans of Hotel California might be surprised at the country rock sounds on this earlier Eagles album. Bernie Leadon was still in the band and his bluegrass influence can be heard on a number of the songs, such as Twenty One, although there are also rock influences on Out of Control and Outlaw Man, and there's room for a very nice waltz too - Saturday Night - a recurring theme on Eagles albums with Take It To The Limit, Hollywood Waltz etc. Desperado dates from the era of concept albums, and the theme here is rock band as outlaws of the old West. As ever, the harmonies are superb, and don't forget the classic Desperado and Tequila Sunrise. Classic is an overused word but this is a classic album.
Read more
One person found this helpful
Report abuse

Was bought as a gift but we have both loved the album, would recommend to any country rock fan
Read more
Report abuse