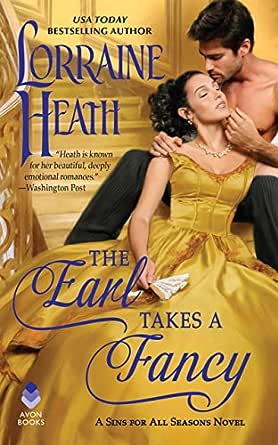 You've subscribed to Sins for All Seasons! We will preorder your items within 24 hours of when they become available. When new books are released, we'll charge your default payment method for the lowest price available during the pre-order period.
Update your device or payment method, cancel individual pre-orders or your subscription at
Your Memberships & Subscriptions 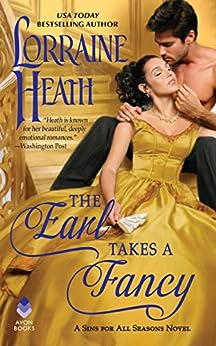 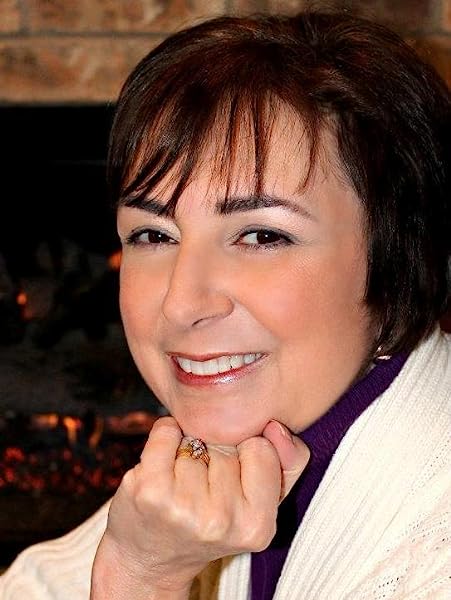 The Earl Takes a Fancy: A Sins for All Seasons Novel Kindle Edition 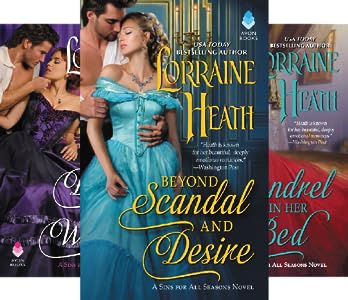 Lorraine Heath wrote her first story at seven, and it involved a fisherman who fell in love with a mermaid. She has since moved on to writing about sexy cowboys and dashing English lords--sometimes, cleverly, within the same book. Publishers Weekly says she is a ""master of her craft."" She is, indeed, and along with being a New York Times and USA Today bestseller, she has won the Rita Award and three RT Reviewers' Choice Awards, as well as the RT Career Achievement Award.

"Heath has crafted a love story dedicated to the inherent romanticism of books; she understands the sensual, comforting, compassionate appeal of books, reading, and those that treasure them. The Earl Takes a Fancy possesses all her usual skill for devising romance, but more potently, it also celebrates a more deep-seated emotion and sense of connection familiar to any bookworm." (Entertainment Weekly)

“…the fifth superbly rendered addition to RITA Award-winning Heath’s Sins for All Seasons series is new proof of her gift for transforming insightful characterization, solid storytelling, boundless passion, and bold sensuality into sigh-worthy romances.”   (Booklist) --This text refers to the hardcover edition.

4.6 out of 5 stars
4.6 out of 5
53 customer ratings
How does Amazon calculate star ratings?
Amazon calculates a product’s star ratings based on a machine learned model instead of a raw data average. The model takes into account factors including the age of a rating, whether the ratings are from verified purchasers, and factors that establish reviewer trustworthiness.
Top Reviews

Élodie Nicoli
TOP 1000 REVIEWER
5.0 out of 5 stars What the heart seeks ...
Reviewed in the United States on March 31, 2020
Verified Purchase
Will she fulfills her family’s wishes for herself or decides for a different path, one answering her own dreams ...

During my first read by Lorraine Heath I was immediately entranced by these Trewloves, and while I remembered learning a different story for Fancy’s father than the one she was told about, I was curious to know how will she respond or not to her family’s expectations.
So far I have only read Aiden’s story, and it was a tale about more mature characters, when Fancy and Matthew are both younger.
Fancy was pampered and protected by her siblings, she lived the life of a well-bred miss but being illegitimate and coming from the rookeries, she also is aware of the struggles of the weakest and poorest, why in her pwn way she tries to better their life with her available means, education.
This journey teaches her a lot about herself, while she learned to be confident and sure, she will discover sides of herself she didn’t know, and when faced with a choice, it will be the new Fancy that must make a choice.

Matthew knows who he is but he has always taken everything around him as granted. Even if he was tricked and found himself brought to the altar without a second glance by his bride-to-be, he now views women as actresses with only schemes in their mind. So when from her grave, his late wife made him a fox hunted by all the debutantes, he decides to run away from the marriage part and hide. Thus when he meets a young woman who checks all the boxes, he keeps his identity secrets and slowly lower his guards to trust her.

So as they get to know and slowly fall for one another, I wondered when the second shoes will drop and how Fancy will react to his deceit even if it was unintentional at the beginning. Fancy wants to please her kin, when her heart calls her outside the ballrooms, Matthew wants to be chosen for him and not the title tagged on the man. Both have a long way to extricate themselves from the web of their heart and desires to seek what they finally really want.
5 stars

I was granted an advance copy by the publisher Avon through Edelweiss, I preordered my own.
Here is my true and unbiased opinion.

SharonU
5.0 out of 5 stars A Win for Literacy
Reviewed in the United States on April 28, 2020
Verified Purchase
Being an ESL (English as a Second Language) Teacher myself, I loved the dedication in this book to English Language Learners and people who are dedicated toward helping them achieve their goal. How awesome is that!

As for the story, I was sold from the beginning, as the heroine/Fancy was a bookseller who held literacy classes for those less fortunate. She even got the hero/Marcus to help teach, not knowing he is an Earl. Fancy's family, the Trewloves support her in everything she desires and we learn a lot more about Ettie Trewlove, the mother's story. I shouldn't have read this story in the night because it gave me a heart palpitation or two when Fancy found out about Marcus' title, but all is well in the end after a couple of twists and turns. Good read!
Read more
2 people found this helpful
Helpful
Comment Report abuse

Always V
5.0 out of 5 stars Sweet, Passionate, & Compassionate!
Reviewed in the United States on April 30, 2020
Verified Purchase
So crazy in love with Matthew Sommersby, Earl of Rosemont and Fancy Trewlove. Their love story read like a fairy tale. Loved how the major conflicts for both Fancy & Matthew were beautifully played out. His dead and manipulative wife drove him to seek peace and anonymity away from Society. Fancy's seemingly impossible-to-overcome obstacle was her need to fulfill her mother's wish that she marry into nobility.

Love all the page time they had together. Their getting-to-know each other in Fancy's bookshop, a fantasy world, was so captivating. It was a place where Matthew could be just a man, not an earl. This love story was exactly what I needed right this moment. I needed a sweet, strong, passionate, as well as compassionate heroine, and yes, a book lover like Fancy. Loved that Matthew knew she fell in love with and chose him, not his title.

Valerie A KaderTop Contributor: Historical Fiction Books
3.0 out of 5 stars Just OK
Reviewed in the United States on April 17, 2020
Verified Purchase
I love regency romances! I’ve read almost all of this author’s books and liked most of them, even loved some. This book was a little flat for me. The premise was intriguing - young illegitimate debutante falls for earl incognito. The heroine, Fancy, was mildly compelling - pretty, sweet, kind, maybe a little naive and meek. The hero, Matthew, was a little less compelling - handsome, aristocratic, and friendly, but aimless and entitled. They had a little bit of chemistry but not much sizzle. The storyline was bland and predictable. Overall, not a bad book but never quite caught fire for me.
Read more
Helpful
Comment Report abuse

Lise Smith
5.0 out of 5 stars Oh Fancy That!
Reviewed in the United States on April 3, 2020
Verified Purchase
What an incredible set of circumstances our hero and heroine must traverse before finding their happily ever after. As is always the case with this author, you have great dialogue, and great character development. I love this series.
Read more
2 people found this helpful
Helpful
Comment Report abuse

MjM
5.0 out of 5 stars Loved it!
Reviewed in the United States on April 5, 2020
Verified Purchase
The author has created a great cast of characters with this series. I've enjoyed every one of these books. They are so well written.
Fancy and Matthew's story is endearing and sexy. So enjoyable to read.
Read more
2 people found this helpful
Helpful
Comment Report abuse

Kindle Customer
5.0 out of 5 stars What a great book!
Reviewed in the United States on April 1, 2020
Verified Purchase
Loved the whole story! Fancy deserved a happy ever after! Matthew does too!! Loved all the characters in these books can't wait for Beast's story coming out soon!💖
Read more
2 people found this helpful
Helpful
Comment Report abuse

Terri B.
5.0 out of 5 stars Loved it
Reviewed in the United States on April 13, 2020
Verified Purchase
Wonderful story with great characters. Thoroughly enjoyed this book. Looking forward to the next and last one of this series.
Read more
2 people found this helpful
Helpful
Comment Report abuse
See all reviews from the United States

Frances Bard
5.0 out of 5 stars Lovely
Reviewed in the United Kingdom on April 1, 2020
Verified Purchase
Wonderful story . A really enjoyable story of Fancy Trewloves desire to fulfil her mother's wish for her to marry well,marry a lord, but falling in love with a man she believes to be a commoner.
Read more
Helpful
Sending feedback...
Thank you for your feedback.
Sorry, we failed to record your vote. Please try again
Report abuse

MRHS
5.0 out of 5 stars Worth waiting for
Reviewed in the United Kingdom on April 3, 2020
Verified Purchase
As usual, another excellent story from Ms Heath. I adored Fancy, the heroine of the story. Never wanted it.to.end. Certainly helped being in self isolation pass the time easily❤
Read more
Helpful
Sending feedback...
Thank you for your feedback.
Sorry, we failed to record your vote. Please try again
Report abuse