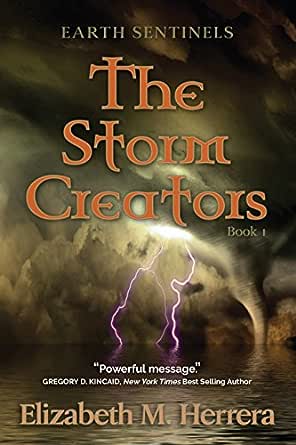 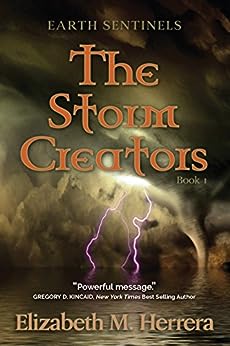 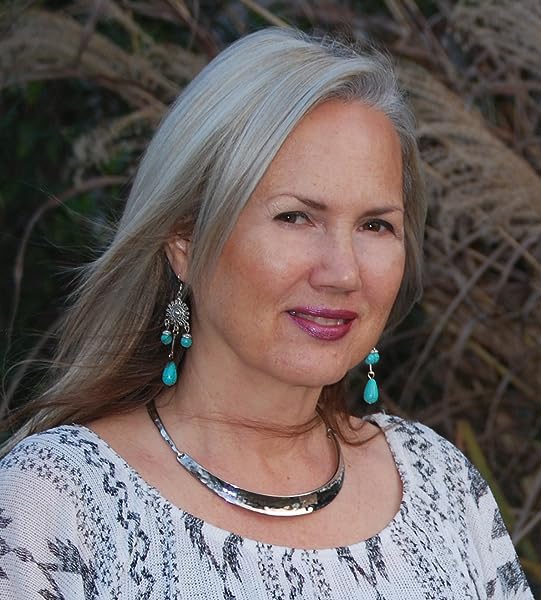 "Riveting! The fiction reads as a non-fictional account of the spiritual side of the indigenous people and the problems facing our world today. A must read!" -- Dennis Nighthawk, Healer and Spiritual Leader, and Tribe Member of the White Laurel Band of Cherokee

"Bravo! This book is a page turner to the end. Herrera has woven a cautionary tale with threads of history, revelation and hope." -- Richard O'Shields, Channel and Media Professional, Everyday Connection Radio

"Quick paced with a powerful message." -- Greg Kincaid, New York Times Bestselling Author
"This compelling adventure shows that our struggles around the world are connected and that ordinary people have the power to change the world for the better." -- Dr. Margaret Flowers, Co-director of Popular Resistance

Shaman Elizabeth Herrera is a shamanic healer, environmentalist and author of life-changing books. Her stories encourage people to stretch outside their comfort zones and reexamine their own beliefs. She inherited her rebellious spirit from her father who was raised by his grandfather--a full-blooded Apache who smuggled sugar and flour from Mexico into Texas, exchanged gunfire with Texas Rangers and crossed paths with Pancho Villa.

Elizabeth was raised in a Christian home, but lost her faith in her early twenties. For over a decade, she searched for something to fill the void, eventually discovering Native American spirituality (shamanism). Through this spiritual practice, she unexpectedly became a catalyst for healing and miracles. These events led her back to a belief in a higher power.

Always drawn to the spiritual side of life, Elizabeth began her shamanic path in Michigan where she learned to shamanic journey with Stephanie Tighe (a certified Sandra Ingerman instructor). Elizabeth continued her studies through the Foundation for Shamanic Studies for shamanic journeying, soul retrieval, and death and dying (psychopomp), but her major source of learning has been from her spirit guides, who offer limitless guidance and lessons on living a more spiritual life. To learn more, visit her healing website at ShamanElizabeth.com.

Elizabeth is the author of the books "Shaman Stone Soup", and "Earth Sentinels, Book 1". "Of Stars and Clay," the second book in the Earth Sentinels series, 2017, in addition to the inspirational fictional story "Dreams of Heaven", 2017. To keep abreast of her latest work, visit ShamanElizabethHerrera.com. --This text refers to an out of print or unavailable edition of this title.

3.9 out of 5 stars
3.9 out of 5
30 global ratings
How are ratings calculated?
To calculate the overall star rating and percentage breakdown by star, we don’t use a simple average. Instead, our system considers things like how recent a review is and if the reviewer bought the item on Amazon. It also analyzes reviews to verify trustworthiness.

Robert C. Nelson
5.0 out of 5 stars Shaman Elizabeth Herrera Is An Author For Our Time!
Reviewed in the United States on October 14, 2014
Verified Purchase
Earth Sentinels: The Storm Creators is a book that exposes the evils behind those who rape the Earth for their own benefit. I am a horror author and I can say there is nothing worse than real life horror. Take a look at all that is going on around us. Big business rules the world. They have control of the politicians. Their money talks. Big oil, Monsanto, and many others threaten our very home.

I am a pessimist at heart. Perhaps that explains my stories which reek of evils and horrors surrounding us. My tales contain messages, but they are dark and don't have much hope within them. Shaman Elizabeth is an optimist, believing we can change the status quo if we do the necessary things now. Earth Sentinels tells this story. It is a story of international and other-worldly cooperation to make a statement to the leaders of the planet that if they don't wake up, and wake up in a hurry, that there will be a price to pay.

Because I am a spiritual person - please notice I did not say religious, there is a difference - I particularly enjoyed the parts of
this book dealing with indigenous beliefs. Earth Mother is real to me. Respect for all life is real to me. All this, and more, is so aptly described in this great book.

Don't let the message contained within this super book lead you to believe that a great adventure is not unfolding before your very eyes. There are super heroes in this story. They do what must be done, regardless of the consequences. People of conscience sometimes must tread in areas that tear at their very souls because of the internal dilemma of good versus evil. The heroes in Shaman Elizabeth's story are in constant battle mode, many times their brains being the arena for quashing the evils around them.

So what are you going to get when you explore the pages? You will get a superbly written adventure tale exploring humanity at its best, and humanity at its worst. You will be taken on a grand trip where good and evil are played out before you. And . . . and you will breathlessly hope the outcome is the one you are pulling for.

Buy this great book. Read it. Then settle back after the blood has stopped pounding everywhere in your body and marvel at the splendor you were just allowed to be a part of.

That, my friends, is the power of this great book.
Read more
7 people found this helpful
Helpful
Comment Report abuse

grapelady1
5.0 out of 5 stars A Must Read
Reviewed in the United States on May 14, 2014
Verified Purchase
After finishing Shaman Herrera's great thought-provoking book, my question to you is," Are you an Earth Sentinel?" If so, it is time for us to connect. I know I am and always have been, and one of my biggest frustrations is I have felt alone as I live day to day hearing all the bad news about what is being done to our "Mother," and I alone as a healer can only accomplish so much. When I first started the book I did not like having to face some of the raping of the Earth( some acts of which I was familiar with and some not) that have already occurred. However, as I read on, I envisioned those who care about the earth working together to bring change, I became much more hopeful. I began to envision a group of healers,light workers, shamans, energy workers, etc., all working together to bring about the positive changes which I think are beginning to surface. While there are a large number of environmental groups who are working to protect the Earth, I have felt a separateness from other energy workers who often do what they can, but having been part of healing groups in the past, I am thinking how much more powerful it would be if we could work together. This is a book to read for sure and give some thought as to what your role should be if you care about preventing further ravaging of the Earth. Where do we go from here?
Read more
5 people found this helpful
Helpful
Comment Report abuse

Gratefully Healed
5.0 out of 5 stars Such good timing to tell this story
Reviewed in the United States on June 13, 2014
Verified Purchase
This story moves at a fast pace with lots of characters to get to know. They all have a valuable purpose on planet earth (as do we...) The characters have a good flow to their dialect, leaving you wishing you had more time to get to know them. The fast pace, however makes sense as they (the characters of the story) are running out of time... My favorite was the fallen angel.. due to the ambiguity the Author was able to give him... both heroic and villainous! It's definitely a good read, many details to consume but so poignant with the shape of our planet and it's inhabitants. I don't want to give the complete story away - please read you will enjoy. Hey Author can we expect a prequel? I will keep my fingers crossed.. Overall - very enjoyable and awakening!
Katlynn
Read more
7 people found this helpful
Helpful
Comment Report abuse

Lois R. Langweiler
3.0 out of 5 stars A Wake-up Call for Sure!
Reviewed in the United States on January 17, 2015
Verified Purchase
A friend suggested I read this book months ago. Although I'm an environmental advocate, I resisted. It was only because when I pick up a fantasy book I want to be transported to a different world, a world free of the problems we face on a daily basis. EARTH SENTINELS drew attention to the weighty environmental issues facing those of us living on earth in an interesting way. A wake-up call for sure! For me it was a little like taking cod-liver oil. You know you should take it because it is good for you, but it's a little hard going down. Perhaps that was the author's intention. After all, what is happening to our planet is not pretty.
Read more
3 people found this helpful
Helpful
Comment Report abuse

Eric Hunt
5.0 out of 5 stars It is our joys that we love to share and that enrich our lives
Reviewed in the United States on October 7, 2017
Verified Purchase
Visionary . . . Earth Sentinels: The Storm Creators is an adventure with absolutely compelling characters,... the fallen angel Bechard, shamans, spiritual beings and earth creatures... all working together to collaborate and to resist greed, corruption and indifference. Evidence demonstrates that our planet is in trouble... reliance on fossil fuels, deforestation, genetically-engineered crops, economically-driven greed, and environmentally-irresponsible practices possibly position us at the cusp of an extinction event. Throughout history in every past that we know of, humans have been at odds with other humans. Recently, a lot of people are fed up with that. The Earth Sentinels may be a fictional force... but I know, I was inspired by their story. I wanted to discover a divine nature. I wanted to give up fighting and contrasting and find ways to connect and to share. I was entirely fed up with being against something. Here is where I was when I picked up the story, All of our being is part of all of being. Our struggles from all around the world are disconnecting us . . . It is our joys that we love to share and that enrich our lives ... we are becoming globally and integrally connected to all that is. This story relates that healing vision.
Read more

B Higson
1.0 out of 5 stars One Star
Reviewed in the United Kingdom on October 14, 2014
Verified Purchase
chessey rubbish
Read more
Report abuse
See all reviews