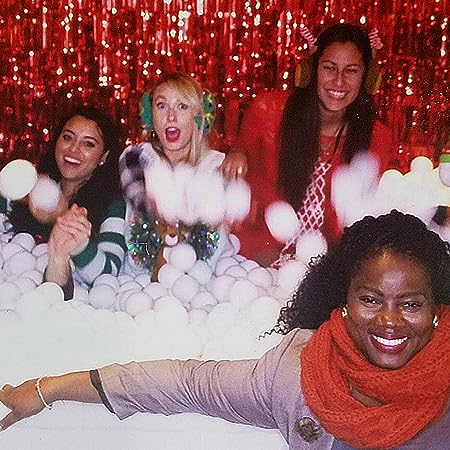 Eartha Watts Hicks is the founder of Earthatone Publishing and Earthatone Books. Former director of publications for Cultivating Our Sisterhood International Association (COSIA), she is a NYFA (New York Foundation for the Arts) artist, a member of the American Society of Composers, Authors, and Publishers (ASCAP), and the legendary Harlem Writers Guild. A fiction fellow of the Hurston/Wright Foundation, Center for Black Literature and the North Country Institute and Retreat for Writers of Color, Eartha’s writings have appeared in several online publications, including Harlem World Magazine, TheUrbanBookSource.com, and Future Executives.org. Her writing advice has been featured in The Writer’s Guide to 2013. In June of 2013, she received the Just R.E.A.D. “Game Changer” Award in the fiction category from the NYCHA branch of the NAACP and was named New York City literacy ambassador. In 2014, she was featured in the Congressional Black Caucus as part of the Write It Down panel discussion. A PR writer and affiliate of BlackPR.com, she specializes in press releases for entrepreneurs, ministries, and nonprofits. She also leads writing, self-publishing, and publicity workshops for the New York Public Library, The National Writers Union, and The New York City Parks Department. 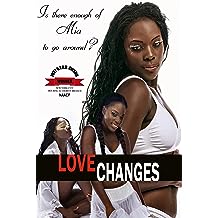 Is There Enough of Mia to Go Around?: Complete Revised Edition (LOVE CHANGES: The Complete Revised Edition Book 3) Feb 25, 2014
by Eartha Watts Hicks
( 77 )
$7.99
Ten years in the making, the debut novel by Eartha Watts Hicks infuses original poetry, song lyrics from 80's and 90s popular music, and prose in the narrative of Mia Love, a twenty-six year old single mother. Mia Love quits college to support her live-in boyfriend, Spider. When she becomes pregnant, her mother, his mother, and Romell, her handsome and flirtatious best friend, all think she has made a bad decision. Now, Mia cares for both her newborn son and Spider. Tethered to a low wage job to pay the bills, she's urging him make a commitment. Spider, himself underemployed, remains resistant. This causes tension between the two, with arguments getting more and more personal. Meanwhile, "good friend" Romell is offering a shoulder (and a lot more) to lean on. What ensues is a love triangle with a unique twist, two men vying for a lady with a baby. This heartwarming story of a young woman's struggle to remain true to herself was edited by Grace F. Edwards. Love Changes received the 2013 "Literary Game Changers" award in the fiction category from the NYCHA branch of the NAACP and was selected as The New York Amsterdam News's recommended summer read for 2013. Eartha Watts Hicks was a featured panelist at the 2014 Congressional Black Caucus.
Read more
Other Formats: Paperback 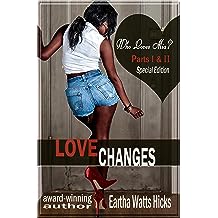 LOVE CHANGES: SPECIAL EDITION: Who Loves Mia? Jan 17, 2017
by Eartha Watts Hicks, Grace F. Edwards
( 15 )
$4.99
Mia Love is a single mother, living in a rundown apartment in the South Bronx. She is struggling (but dealing) with a newborn baby, a live-in commitment-phobe, and a handsome flirtatious best friend, trying to ease his way in. Adjusting to her newborn is enough of a challenge. What happens when she must choose between the father of her baby and her male best friend?
Read more 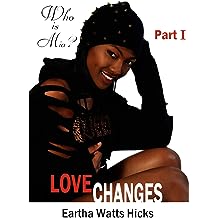 Who Is Mia? (The First 18 Chapters of LOVE CHANGES Book 1) Jun 28, 2015
by Eartha Watts Hicks
( 12 )
$0.99
Meet Mia Love. Mia is a single woman in transition. College days are over and Mia has recently settled into a small apartment in the South Bronx with her high school sweetheart. Ever since, everyone seems to have their opinion on how she should live her life. But it's up to Mia to decide for herself what she wants. Will Mia get what she wants most?
Read more
Other Formats: Paperback 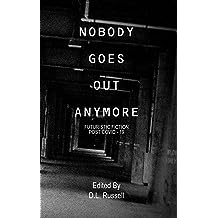 NOBODY GOES OUT ANYMORE: FUTURISTIC FICTION POST COVID-19 Aug 10, 2020
by D. L. Russell, D.L. Russell, Katherine White, Josh Carson, Chris Rodriguez, Anna Lindwasser, Eartha Watts-Hicks, Rosie Maureen, Nigel Sellars, Rhashaa Price
( 9 )
$4.99
s the Coronavirus the end of the world, or just the end of the world as we know it? No matter how you view tomorrow, the consensus is nothing will ever be the same.NOBODY GOES OUT ANYMORE asked 16 of today’s most diverse creators of Speculative Fiction to show us their visions of the future and the results ranged from hopeful to full blown Conspiratorial Paranoia. NOBODY GOES OUT ANYMORE explores tomorrow with a critical, unflinching eye. A tomorrow we know we have jeaporized with our actions of the past. Is COVID-19 our Extinction Level Event or just another step in our Evolution?CONTRIBUTORS - Joanna Michal Hoyt - D.L. Russell - David R. Mellor - R.D. Doan - Eartha Watts-Hicks - Bil B. Peters - Anna Lindwasser - Katherine LE White - Kahn Brown Jr. - Rhashaa Price - Josh Carson - Chris Rodriguez - Veronica Smith - Nigel Anthony Sellars - R. Maureen
Read more
Other Formats: Paperback 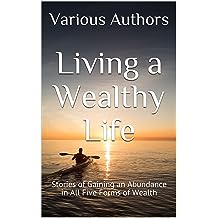 Living a Wealthy Life: Stories of Gaining an Abundance in All Five Forms of Wealth Aug 15, 2017
by Various Authors, Karynne Summars, Spike Humer, Chris and Marlow Felton, Isabella Manetti, BigDaddy Walker, Many More
( 17 )
$6.73
Reading Living a Wealthy Life is like watching a collection of engaging short films. From the high-schooler who has the courage to question the path she’s been told is correct to the ex-marine who learns what is truly valuable, this is a collection of stories about facing the storm of life and coming through it a better person. Through these true tales you’ll be entertained, inspired and moved.

Written by contributors from around the globe, each chapter is a chance to experience something outside your every-day world. You’ll also see that from Australia to Columbia to the United States people aren’t as different as you might imagine. Are you the kind of person who believes that a successful life has many definitions? This is the book for you. Read it and you will discover something about yourself.
Read more
Other Formats: Paperback 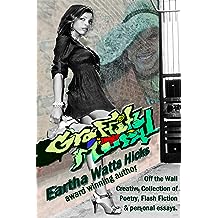 Graffiti Mural: My Off the Wall Creative Writing Aug 1, 2016
by Eartha Watts Hicks
( 3 )
$7.99
Creative Writing needs to breathe somewhere. Why not where they can be shared? Graffiti Mural is a collection of poetry, lyrics, lyrical rants and tales (both true and imagined) from Eartha Watts Hicks, Hurston-Wright fiction fellow, member of the Harlem Writers Guild and winner of the Just R.E.A.D. literary fiction "Game Changer" Award from the NYCHA Branch of the NAACP.
Read more
Other Formats: Paperback 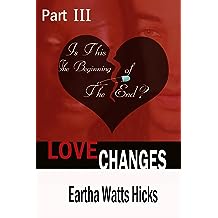 Is This The Beginning of The End? (Love Changes) Nov 14, 2017
by Eartha Watts Hicks
( 4 )
$4.99
Mia Love is a single mother, juggling a newborn and too many responsibilities. She is determined to marry Spider, the father of her baby. This is the crux of many heated arguments. At her wits end, Mia confides in her closest friend, Romell. But when Romell decides he wants Mia for himself, everything reaches a fever pitch.

Can Mia salvage her relationship with Spider? Or is this twisted love triangle more than Mia can handle?
Read more
Other Formats: Paperback 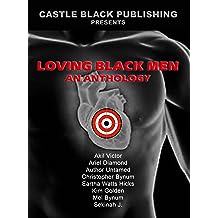 Loving Black Men: An Anthology Sep 25, 2016
by Christopher Bynum, Mel Bynum, Ariel Diamond, Kim Golden, Eartha Watts Hicks, Sekinah J, Author Untamed, Akil Victor
( 2 )
$0.99
Violence against black men in America is increasing, in their own neighborhoods and at the hands of law enforcement. The injuries and fatalities have become so common that many are becoming desensitized to the continuous news and images of brutality. The proof is in the commentary on news outlets and social media. Many expect nothing to be done, because so often nothing is done. Thus, the Loving Black Men project.

The authors who contributed to this project wanted to do more than share their opinions on social media. They have come together to illustrate with words the value of human life, especially that of males of color.

With their narratives these authors have declared war against ignorance that breeds intolerance, and fear, and racism. This is their weapon to counteract the hate speech mongers, the politicians and the commentators posing as news broadcasters.

Through their stories and poetry they fight wielding swords of enlightenment.

Though these authors have declared war, the Loving Black Men anthology isn’t about hate. It’s a project about love.

All proceeds from this publication will be donated to charity. 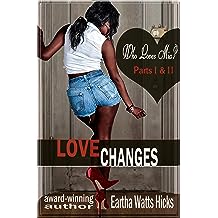 Who Loves Mia? Jun 26, 2015
by Eartha Watts Hicks
( 12 )
$2.99
Mia Love is a single mother, living in a rundown apartment in the South Bronx. She is struggling (but dealing) with a newborn baby, a live-in commitment-phobe, and a handsome flirtatious best friend, trying to ease his way in. Adjusting to her newborn is enough of a challenge. What happens when she must choose between the father of her baby and her male best friend?

Reading about the reality of what’s really happening in many young women’s lives is enlightening. Perhaps this novel can change a young woman’s path and allow her to see what a difference an education can make. Young men and women who put the cart before the horse (e.g., having a child out of wedlock before finishing school and having a career) in the hopes of marrying another one day may see the situation differently once they read how 'love changes.'"
---Renee Minus White (New York Amsterdam News)