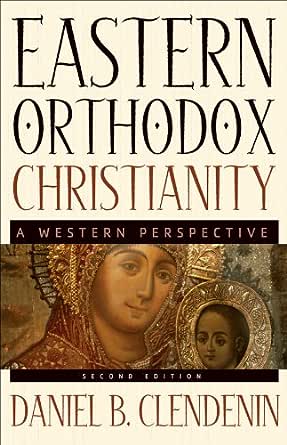 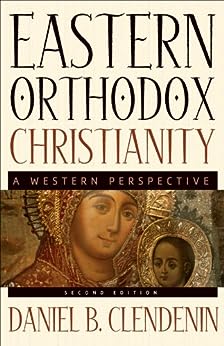 4.3 out of 5 stars
4.3 out of 5
27 customer ratings
How does Amazon calculate star ratings?
Amazon calculates a product’s star ratings based on a machine learned model instead of a raw data average. The model takes into account factors including the age of a rating, whether the ratings are from verified purchasers, and factors that establish reviewer trustworthiness.
Top Reviews

Kerry Walters
4.0 out of 5 stars America's "fourth major religion" introduced
Reviewed in the United States on May 17, 2006
Verified Purchase
Orthodox Christianity is little known to mainstream Americans, be they Christian or otherwise. It seems an exotic import from Russia, Greece, and the Balkans, and as foreign to American Protestantism or even American Roman Catholicism as Tibetan Buddhism. Moreover, there's a great deal of skepticism and even outright rancor directed at Orthodoxy by many Protestants and Roman Catholics. The former see it as unbiblical (whatever that charge means) and the latter see it as a challenge. Finally, too many Orthodox in this country take such an exclusivistic position when it comes to salvation (only the Orthodox Church is the one true church) that they only encourage wariness or dislike by non-Orthodox. (Each of these positions is reflected, by the way, in earlier amazon.com reviews of this book.)

Daniel Clendenin's _Eastern Orthodox Christianity_ has the great merit of introducing the "fourth major religion" to Americans in a reader-friendly and remarkably accurate (for an outsider) way. Other introductions to Orthodoxy are just as good (e.g., Timothy Ware's _The Orthodox Church_), but they're written by insiders. Clendenin is an evangelical Protestant who spent some years teaching in Moscow and absorbing the doctrines and liturgy of Orthodoxy. He writes with a great deal of sensitivity and sympathy.

Clendenin begins with a short history of the Eastern Orthodox Church and its break with the Western Latin Church. Then he focuses on its doctrine, dealing chapter-by-chapter with its understanding of God, the importance of icons and incarnationism, pneumatology, and theological anthropology. He concludes with a couple of chapters that spell out his reservations about Orthodoxy, and his reasons for remaining a Protestant, in spite of his agreement with many aspects of Orthodoxy. (An earlier reviewer who criticized Clendenin's "uncritical approach" apparently skipped these chapters.)

Clendenin is particularly good in his discussion of apophasis, and his analysis of Orthodoxy's skepticism of rational "worded" theology and its embrace and celebration of mystery. His chapter on anthropology, in which he focuses on theosis--a much neglected Christian fundamental here in the West--is also masterful.

The chapter on icons isn't as well thought-through. A Protestant confused about the significance of icons for Orthodox Christians isn't likely to get a great deal of clarification here. Clendenin also occasionally cites Patristic quotations already cited by secondary authors, rather than going to the original texts themselves, and this is a bit troubling. But it must also be pointed out that one of the remarkably refreshing features of his book is his generous quotations of early Greek Fathers who aren't often studied in the West.

All in all, Clendenin's book is an invaluable resource for outsiders interested in the "fourth major religion" in this country. Highly recommended, particularly when read along the accompanying anthology _Eastern Orthodox Theology: A Contemporary Reader_.

Gabriel Emanuel Borlean
5.0 out of 5 stars Orthodoxy from a cultural and historical perspective. Very solid but not comprehensive.
Reviewed in the United States on February 9, 2006
Verified Purchase
Daniel B. Clendenin has done his research. Not only does he have the credentials (Ph.D. in Theological and Religious Studies, Drew University) but he has also spent some years teaching religion at the Moscow State University (right after the communist soviet union collapsed in '91) right in the heart of Slavic Orthodoxy - (Moscow has also the nickname of the 3rd Rome, in christian history).

Considering that Clendenin has been and still is a Presbyterian, it is very assuring to read this book and realize how non-polemical and theologically un-biased it is. A great companion for this read is Clendenin's other book "Eastern Orthodox Theology - A Contemporary Reader."

This book is written from a Protestant and Western perspective. Basically Clendenin tries to explain Eastern Orthodoxy to the average Western man and woman or your average Protestant churchgoer. A lot of this introduction has to do with the cultural and mystery/mystic-driven aspect of Orthodoxy.

He starts the book with two chapters on church history, a great foundation necessary to understand the early development, isolation, and ethos of Orthodoxy.

The following four chapters are discussions and explanations of four important aspects of the Orthodox faith and theology:
3) Apophatic theology and the mystery of God,
4) Christ's image and the use and meaning of icons in Orthodoxy,
5) On the authority of Scripture and Christian Tradition, and
6) Theosis - a very Orthodox term and concept.

The last chapter (#7 - "Hermeneutics of Love") presents balanced analysis and questions challenging the Orthodox believer as well as the Protestant Christian. This chapter is the one where I had the most to learn from.

As a result of reading this book and the companion I have a much better understanding of Orthodoxy (as a Protestant Christian) and have things to talk about with my Orthodox fellow brothers and sisters in Christ. Other books I would recommend on the topic of Orthodoxy are Timothy (or Kallistos) Ware - "Orthodox Church" and especially "Orthodox Way."
Read more
5 people found this helpful
Helpful
Comment Report abuse

K.H.
5.0 out of 5 stars You May Just Fall In Love
Reviewed in the United States on June 21, 2003
Verified Purchase
I read this book back in the Spring of 2001 after reading "The Orthodox Way" by Bishop Ware. In my serach about the Orthodox faith, I found after reading this book I was indeed searching for teh Orthodox faith. This book was a good influence in my conversion, because Clendenin, a Protetstant - the tradition I was currently in - wrote such a objective and endorsing work, I found it hard to not go to the Orthodox Church and expierence it for myself.
Compared to most Portestants who examine the Orthodox faith, Clendenin seems to "get it." He is respectful, if not appreciative of the Orthodox liturgical expierence.He is aptly able to inform others on how the Orthodox Church understands scripture and tradition as the "witness of teh Spirit." His chapter on theosis is very good and his last chapter tries to evaluate the Orthodox perspective.
Like another reviewer, I ended up converting to the faith a few months later. If a Protetsant wants to get an idea of Orthodoxy, but does not want to read works by Orthodox Christians, then this is a good place to start.
Read more
20 people found this helpful
Helpful
Comment Report abuse

Sean J. Mcnulty
4.0 out of 5 stars like Clendenin, we should hold onto our Protestant distinctives
Reviewed in the United States on July 26, 2016
Verified Purchase
Daniel Clendenin has written a well balanced and an objective book on Eastern Orthodoxy. He writes from a Protestant point of view but he is sympathetic to Orthodox theology and practice. There is much we as Protestants can learn from the Orthodox and we should try to incorporate it into our theology but in the end I believe, like Clendenin, we should hold onto our Protestant distinctives. Clendenim's work is well footnoted and is helpful for further research on the Eastern Orthodox Church. I would recommend this as a good starting place if you are interested in further researching Orthodoxy, especially if you are coming from a Protestant perspective.
Read more
Helpful
Comment Report abuse
See all reviews from the United States