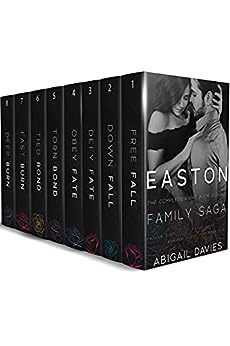 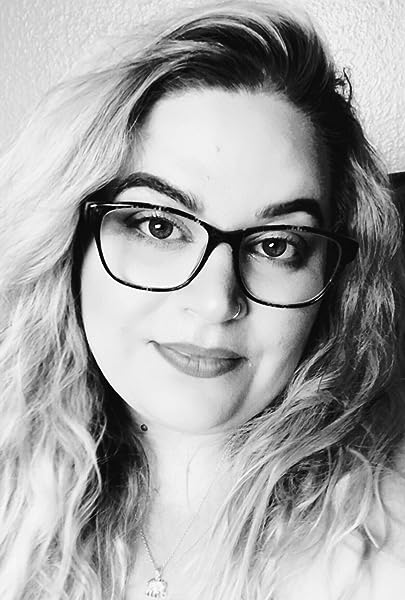 by Abigail Davies (Author) Format: Kindle Edition
See all formats and editions
Sorry, there was a problem loading this page. Try again.

The Easton Family Boxset is a complete collection of eight books. Full of forbidden angst, with gripping story lines and jaw dropping twists you’ll never see coming. These broody men will do anything to protect the women in their lives.

We were never meant to meet; our paths shouldn’t have crossed.

And yet they did.

I was an undercover DEA agent and she was the little sister of my next target.

She was forbidden in every sense of the word, and not just because of the sixteen year age gap.

We were taught to expect the unexpected, but nothing could have prepared me for what was about to happen.

But there was a secret I was keeping, and if revealed, it’d destroy the lives of those I’d vowed to protect.

One wrong move and everything could erupt in our faces.

All that remained was one question...

Was she worth it?

I was drowning in the depths of my sorrow, trying to push through each day to get to the next.

And then he turned up.

It should have mattered that I was his student, but it didn’t. And neither did the eight year age gap.

They said there was nothing quite like your first love. That all consuming feeling—the infatuation.

A thousand steps separated us, but nothing could keep us apart.

But once she was on my radar, there was no turning back.

Being deceptive was part of my job as a DEA agent, but I’d learned how to deceive people a long time before that.

But all it took was one action to springboard me back into the real world.

But there she was, the girl I’d known since she took her first breath. The girl who had grown into a woman people couldn’t take their eyes off.

It didn’t matter that her lips pressed against mine roared a fire to life within me.

It didn’t matter that there was a twenty-two year age gap.

It didn’t matter that she was my bosses daughter.

All that mattered was that she was safe.

Belle was forbidden fruit I hadn’t been able to resist, and now there was no going back.

Bonds weren’t meant to be broken, but ours had been torn apart irrecoverably.

My life was a battle, one which I was losing.

Each moment I struggled to keep everything on lockdown. And yet all it took was the man with the enticing eyes to draw me out.

He thought he knew my secrets, but he had no idea the pain I felt.

The torture I suffered.

The agony I held deep down inside where no one else could see.

Dancing had been my only savior.

But now he was too.

The marine who knew the deepest part of my soul. The tattoo artist who turned my black and gray world into full color.

The man fourteen years older than me.

He’d vowed to protect me. To shield me from the evil I encountered.

But there was a dark cloud hanging

Abigail is the author of over twenty five novels; her favorite to write being anything full of angst and drama. Her writing space is her safe haven where she can get lost—and tortured—in the world of her characters.

When not writing, Abi is mother to two beautiful daughters, a black cat, a chocolate labrador, and three guinea pigs.

Becca
5.0 out of 5 stars Easton Family
Reviewed in the United States on December 2, 2021
Verified Purchase
I had read a few of the books as stand alone readings but not as one continuous book until the past two days. These books are phenomenal. The way you put so much emotion into them and make the reader feel like they are in the scenes. You've put so much of the horribles in life and proved how they can be overcome, especially with the love, care, and devotion of family & loved ones.

Amber Webb
5.0 out of 5 stars Amazing series
Reviewed in the United States on November 5, 2021
Verified Purchase
The story of the entire Easton family was amazing! It made me laugh and cry at the same time! Stories that are relevant in this world that need to be told and shared. Being bullied and to have suicidal thoughts hit home with Aria's story.
Read more
Helpful
Report abuse

Marcia K. Cameron
4.0 out of 5 stars Stirs deep emotions
Reviewed in the United States on January 19, 2022
Verified Purchase
I have experienced trauma and loss of a child. Few books can truly express how deeply those things affect our lives. This one does. There is a connection with the characters. The only reason for not giving five stars is the court issues for Asher. Didn’t seem quite accurate.
Read more
Helpful
Report abuse

Malinda Harris
5.0 out of 5 stars Enjoyed!
Reviewed in the United States on December 4, 2021
Verified Purchase
Couldn't put it down! Great family story. Family story, keeps you updated in the each story. Where is Leo's story?!
Read more
Helpful
Report abuse

B.Miller
5.0 out of 5 stars Amazing series!
Reviewed in the United States on June 13, 2021
Verified Purchase
Whole series was heart felt. The words gave you the true feelings of the characters. Could not put this series down. had to read it start to finish.
Read more
Helpful
Report abuse

Kindle Customer
5.0 out of 5 stars Such a great book!
Reviewed in the United States on May 22, 2021
Verified Purchase
I loved the Easton Family. Each book was SO good! So worth the read. I definitely will be reading it again in the future.
Read more
Helpful
Report abuse

Ally boo
5.0 out of 5 stars Great series
Reviewed in the United States on August 22, 2021
Was a good read got some into the books I didn’t want to put it down. Worth the time .
Read more
Helpful
Report abuse
See all reviews

Maria Eleni
5.0 out of 5 stars Brilliant boxset!
Reviewed in the United Kingdom on October 17, 2021
Verified Purchase
A new author for me and I can’t wait to read more of her work! The Easton Family Saga - 4 books - will leave you crying and laughing as the author draws out your emotions as you follow each characters’ journey to overcome the pain and mistakes of their pasts and move forward, to find their future together.
Was enthralled from the start and wanted more!! Also loved that Leo was part of book 4 too. Although they can be read as standalones, I would recommend reading in order to see how all the characters relate to each other and gain a better understanding of all that is The Easton Family.
Read more
Report abuse

Lisa Caddick
5.0 out of 5 stars A fantastic box series that just has to be read!
Reviewed in the United Kingdom on November 16, 2021
Verified Purchase
I have thoroughly enjoyed getting to know the Easton family. I'm so sad that this boxset is over. The characters were brought to life on each page. I loved following their journeys. Life isn't always easy, but with the right people by your side, you can do anything. These books have taught me that much.
Read more
Report abuse

miss.polly
5.0 out of 5 stars Aigail your Easton books had me gripped
Reviewed in the United Kingdom on March 11, 2022
Verified Purchase
This collection of books is the best i have reading a long time and I read alot
The highs the lows
The elodie and asher made me shed a few tears
Looking forward to reading more of your work

Linda Clements
5.0 out of 5 stars 3generations of a family
Reviewed in the United Kingdom on January 7, 2022
Verified Purchase
Enjoyed the storyline it moved along well,one of those you want to keep reading.Liked all 3 stages of the family DEA agent based story
Read more
Report abuse
See all reviews