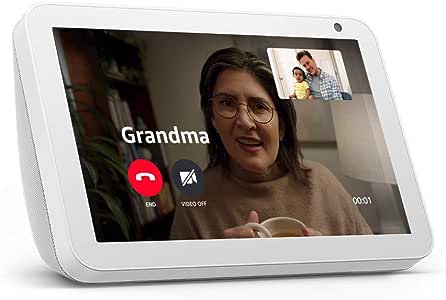 Get a 1-year complimentary subscription to Food Network Kitchen on us with the purchase of an Echo Show 8. Terms & Condition apply. Learn more about this offer.

4.7 out of 5 stars
4.7 out of 5
89,924 global ratings
How are ratings calculated?
To calculate the overall star rating and percentage breakdown by star, we don’t use a simple average. Instead, our system considers things like how recent a review is and if the reviewer bought the item on Amazon. It also analyzes reviews to verify trustworthiness.

Jeff
2.0 out of 5 stars Great, but for one fatal flaw
Reviewed in the United States on November 26, 2019
Color: CharcoalConfiguration: Device onlyVerified Purchase
I really do enjoy this device and am impressed at the abilities of Alexa. That said, until they add the option to disable the “Try Alexa” suggestions on the bottom of the home screen I can’t recommend it and will not be buying addition units.

Looking online I am far from the only person driven crazy by this so I hope Amazon listens to the feedback and makes this possible in a future update.

EDIT: The current top review claims that I (and everyone else complaining about this) am wrong and this can be disabled. While this person is right in the fact you can customize a lot of the display, the “try” suggestions at the bottom are not one of them. For the record I contacted Amazon support before posting my review to confirm this. Anyone who says otherwise is simply wrong.

Eric Moyer
1.0 out of 5 stars I thought it would be better
Reviewed in the United States on November 25, 2019
Color: CharcoalConfiguration: Device onlyVerified Purchase
I had the echo 5 and I can't stand the "try Alexa" phrases at the bottom. From all the reviews I read on the 5 I wasn't the only one. I hope Amazon realized that people didn't like this. I will be returning this. At least make it a option.
Read more

Dan Curtis Fan
1.0 out of 5 stars Alexa, I don't want any "Things to Try"
Reviewed in the United States on November 26, 2019
Color: CharcoalConfiguration: Device onlyVerified Purchase
Aaaaaaaggghhh! The "Things to Try" sayings are sooooooooo annoying. And they are so stupid and do not pertain to me at all. "Alexa, how do you say hello in German?", "Alexa, rap for me.", "Alexa, how hot is the sun?", "Alexa, what's the temperature on the North Pole?", blah, blah, blah. They constantly scroll overtop of the pictures and photos that you upload to the home screen and wallpaper, making them really hard to ignore. And the clock is so small in the upper left corner, that you have to be right on top of it to read it. I couldn't take it any more and had to return my new Echo Show 8.
Read more
1,956 people found this helpful
Helpful
Comment Report abuse

Alexander Scherr
4.0 out of 5 stars Echo Show 8: Good But Not Quite as Good as the Echo Show 5
Reviewed in the United States on November 26, 2019
Color: CharcoalConfiguration: Device onlyVerified Purchase
I have had an Echo Show 5 for over a month in my work office and like it a great deal. I ESPECIALLY like the ability to customize the clock.

I received the new Echo Show 8 as a gift this past weekend and like it for most of the same reasons I like the Echo Show 5: great connectivity; good diversity of content and skills; and great as a sound speaker and photo display.

But I found that the ES8 does not have the same options for clock faces as the ES5. There is no apparent reason for this, nor is it highlighted in the marketing for the ES8. Amazon, please update the ES8 software to permit at least the same range of clockfaces as the ES5.
Read more
1,754 people found this helpful
Helpful
Comment Report abuse

Dave W. Dinges
5.0 out of 5 stars So easy and so good with Ring cameras
Reviewed in the United States on November 25, 2019
Color: SandstoneConfiguration: Device onlyVerified Purchase
I received my new Echo Show 8 - HD 8" smart display with Alexa a couple hours ago. I had it unpacked and connected to my WIFI within 30 minutes. I have 3 Ring cameras, front door bell, a front & back yard motion light cameras. Once I followed the steps to add Ring in the Alexa app, like 2 minutes, It was so intuitive I don't know what I did right but another 5 minutes I said Alexa show front door and she said okay and there was my front door camera on the screen. Then I said Alexa, show back which is what I named the devise "back" and she said okay and showed the back yard camera, same with the front successfully. I have many more smart devices the Alexa app found on my wi-fi so I'm excited to figure out how to add them.
Also, now I understand the importance of naming the devices. Alexa only understands exactly what you name them in the devise list for voice commands.
Read more
1,088 people found this helpful
Helpful
Comment Report abuse

cacalazani
5.0 out of 5 stars A Great Addition to Your Home Tech
Reviewed in the United States on November 27, 2019
Color: CharcoalConfiguration: Device onlyVerified Purchase
This is my first Echo device. Had already set up several skills on the Alexa app before the Echo Show 8 arrived, so I was ready for it; and had my expectations already set as to the quality of the response to the voice commands. If you are considering entering the Echo 'echo-system' and are on the fence about getting one of these, try downloading the Alexa app to your phone or tablet and try it out. On the phone app (iPhone and iPad in my case), a button push activates Alexa; with the Show 8, just say her name and she starts listening.

Some of the Alexa skills still need some work, and your satisfaction with them may vary. But for the Show 8, it's great! The speakers sound better than I expected (actually are pretty awesome compared to the Show's size) and will fill the room with sound. The Show 8 has an external speaker jack on the back, but I don't see ever using it - the internal speakers are THAT good - can feel the bass from the speakers vibrating the kitchen countertop. With the speakers in the rear, having it backed up close to a wall provides the best sound projection and quality. A similar concept to some higher end Bose speakers, which have rear-firing elements that are designed to reflect the sound off of a wall and provide more ambience.

When music is played, the lyrics scroll on the screen, so you can sing along (if your housemates and dog can stand it). Even when playing at a higher volume level, I can still get Alexa's attention but it may take more than one attempt. The microphones are quite sensitive and will pick me up from another room as long as there is not much background noise. The Show 8 also has Bluetooth, so you can pair it with a phone, laptop or other device and play music through the Show 8's speakers. I do this frequently since the Show 8's speakers sound much better than the internal phone or laptop speakers. I did notice a bit of a delay in watching a video on the laptop, and then the audio coming out of the Show 8. It just may be an artifact of using Bluetooth to send the audio.

Rather than the recommended stand (or no stand), I purchased the "Echo Show 8 Adjustable Aluminum Swivel Stand" also sold on Amazon (you can see my review of the stand on that page). A stand is recommended to allow you to position the Show 8 at an optimum viewing angle.

I also purchased several of the Meross Wifi smart plugs (also sold on Amazon). Have them programmed to link with Alexa so I can give one command (such as "Alexa, turn on Christmas Lights") and ALL the plugs in the Christmas group turn on at the same time. Pretty cool! Once Christmas is over, the plugs will be assigned other duties.

The Show 8 can browse the web. There is a Firefox skill that will allow you to open a web browser. And if you don't like tapping letters on the screen, you can pair a Bluetooth keyboard and mouse (see photo). If you have an HP printer, it can be linked to the Show 8 to print grocery lists or stuff you find on the internet.

Not a deal-killer for me, but can't seem to be able to disable the "Try Alexa <blah blah blah>" on the bottom of the home screen. You CAN disable the skills cycling with other topics in the center of the screen as another reviewer noted. I have the Show 8 in my kitchen; so the display is not "in my face" and I am not looking at it all the time, so it is not THAT big of a deal.

Have to admit I was skeptical and wasn't sure if I would find it useful....but I'm liking this device more every day. Now an Echo Dot has found its place in our household as well. Along with some Echo Buttons....

Like the Echo Show 8 so much that I ordered another one to give to my daughter and son-in-law!
Read more

Phil
5.0 out of 5 stars Scaled down version of the show 2, but a bargain
Reviewed in the United States on November 26, 2019
Color: CharcoalConfiguration: Device onlyVerified Purchase
I have a bunch of Echo devices in my home. Including the Echo show 2 10 inch.

I feel like this is the best bargain at current prices.

Sure you are getting 20 percent smaller in terms of screen size. But the difference is not too crazy.

The screen resolution is almost the same. It looks very good.

The sound is very solid in the echo show 8.

I think the 8 is a compressed version on the 10 inch version. But that doesn't mean it's not good.

Overall, I would definitely consider getting this over the 10 inch model. The price difference justifies it.
Read more
800 people found this helpful
Helpful
Comment Report abuse
See all reviews