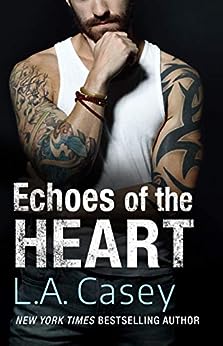 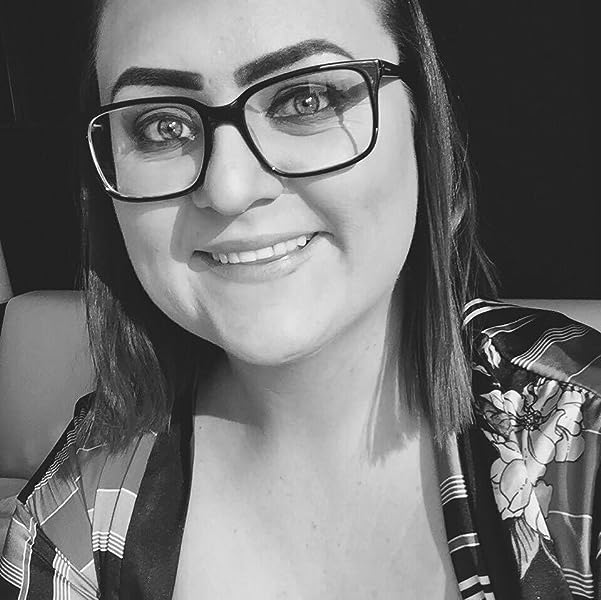 Echoes of the Heart Kindle Edition

L.A. Casey is a New York Times and USA Today bestselling author who juggles her time between her mini-me and writing. She was born, raised and currently resides in Dublin, Ireland. She enjoys chatting with her readers, who love her humour and Irish accent as much as her books.

To read more about this author, visit her website at www.lacaseyauthor.com.

4.4 out of 5 stars
4.4 out of 5
584 global ratings
How are ratings calculated?
To calculate the overall star rating and percentage breakdown by star, we don’t use a simple average. Instead, our system considers things like how recent a review is and if the reviewer bought the item on Amazon. It also analyzes reviews to verify trustworthiness.

Juli
4.0 out of 5 stars Frankie and Risk
Reviewed in the United States on May 27, 2021
Verified Purchase
KU*

This is a second chance rockstar romance.

Frankie and Risk have loved each other since they were 13 years old, it started as friend love and progressed into something so much more. Unfortunately for our young couple, life hit them with some serious obstacles that forced them to be apart, but 9 years later Risk is back home and things get complicated again.

First, I want to say this book totally attacked all my feelings and even made me teary eyed a few times. The love they had for each other was so strong, it build them up when they were together, but also had the power to completely destroyed them when they weren't. Frankie was such a strong character, she was handed heartbreak too many times and she just keep going on with her life; she gave up her soulmate to handle the soul crushing illness that was consuming her mother. Risk, I really wanted to smack this dude for his childish behavior, but his story is just as complicated as Frankie's with some traumatizing experiences thrown in.

I did feel at times the push and pull was a bit much and maybe just thrown in for a bit more drama between our couple. You would think two people who loved each other that much and suffered that kind of heartbreak would at least have a decent conversation about the past to avoid misunderstandings. Unfortunately, this wasn't the case and the miscommunications led to more suffering between Frankie and Risk, but this time it seemed to hurt them more. Thankfully, their friends (aka Risk's band) were able to be there for them and help them.

I would have absolutely loved an epilogue to see how everyone was doing and how their lives turned out especially May, with crazy playboy antics.

Andrea C.
5.0 out of 5 stars Amazing second chance book
Reviewed in the United States on May 25, 2021
Verified Purchase
This story is a second chance at love.
Risk Keller and Frankie went to school with one another but it wasn’t until they were teenagers did they become friends and start dating. Fast forward a few years and in walks Risk Keller again. Frankie thought she put him behind her that is until he confesses how he really feels. But Frankie is not sure she is ready for that risk, she still has responsibilities back in their home town. Risk does try to get Frankie to go with them but a few bumps and set backs has her fleeing home. But everything back home is not as good as she thought. Will these be able to over come their past and move forward? Will Frankie ever be ready to leave her home town? These two go through it in this book so be prepared for an amazing emotional rollercoaster. You’ll love it, I know I sure did.
Read more
One person found this helpful
Helpful
Report abuse

Vicki L.
5.0 out of 5 stars Wow! Be still my heart.
Reviewed in the United States on June 6, 2021
Verified Purchase
If you want a story that will break your heart and piece it back together, you've found it. It's achingly beautiful. Risk and Frankie, along with the rest of the characters, are brought to life and woven together to make a story you cannot put down. I was up until 6am finishing it. It just might be my #1 book of 2021.
Read more
Helpful
Report abuse

Shannah C.
5.0 out of 5 stars A roller coaster of emotions
Reviewed in the United States on June 1, 2021
Verified Purchase
This book had me on a roller coaster with highs and lows. I will say it took me a little time to fall in love with the main characters but when I did it was fast and hard. I hope this book becomes a series as I would love to know more about the rest of the band. I laughed I cried and still kept hoping it would never end. Love love loved this book.
Read more
Helpful
Report abuse

Rosemary
3.0 out of 5 stars All the rockstar elements
Reviewed in the United States on July 28, 2021
Verified Purchase
Gah, this book was endless. Way too many elements and moving parts. Childhood abuse. Asthma. Alzheimer’s. Rock stardom. Substance abuse. Small town girl and world famous rockstar. Hurting each other and themselves without meaning to.
It was overly long. Overly teary.
Read more
Helpful
Report abuse

Mary McCormack
4.0 out of 5 stars Honest review
Reviewed in the United States on June 3, 2021
Verified Purchase
This is a big emotional rollercoaster that has you laughing, crying, and wanting to shake characters. This was really good and keeps you on the edge of your seat and not wanting to put it down. Worth the read!
Read more
Helpful
Report abuse

Amazon Customer
5.0 out of 5 stars In love
Reviewed in the United States on June 19, 2021
Verified Purchase
I couldn’t put this book down. I loved every character and all the details you wrote. I fell in love with Risk and Frankie a little bit more with each turn of a page. Beautifully written ♥️
Read more
Helpful
Report abuse

Lynnie E
4.0 out of 5 stars You're my never enough!
Reviewed in the United States on July 7, 2021
Verified Purchase
What an emotional roller-coaster. I cried and laughed. Poor Frankie went through so much loss and heartache. Glad she and Risk found their way back to each other.
Read more
Helpful
Report abuse
See all reviews

Jade.x
5.0 out of 5 stars My heart!
Reviewed in the United Kingdom on May 25, 2021
Verified Purchase
I dont even know where to begin. Probably stating that I LOVED this book would be a good start.

Not only is this a brilliant story it also highlights some real life subjects, the main one for me being Alzheimer's and how.it can affect not only the person with the disease but how it affects family and friends too.

I think I sobbed the last 10% of the book. It hit me right in the feels and didn't let go. I could live in Risk and Frankies story and never get bored
Read more
3 people found this helpful
Report abuse

Kindle Customer
1.0 out of 5 stars Complete waste of my time
Reviewed in the United Kingdom on June 14, 2021
Verified Purchase
I'm going to try and avoid spoilers. Where do I begin in this review? The heroine is a pathetic groupie who gets a second chance with a big she broke up with so he could go on his merry way and shag half of the female population in the US while she existed in a catatonic life of working full time as a waitress and looking after her dying mother.

The main character Frank has no backbone, and the love interest rock star Risk is a struggling narcissistic addict. I have to say it's been a while since I've read a romance that was so I'll suited for each other. Their dynamic is toxic and I actually worry for young women who read this and think it's okay to go back to this kind of relationship and this type of drama, negativity and despair. To quote the famous Cristina Yang, sometimes love isn't enough.

I didn't enjoy this book and honestly wouldn't recommend it worth a damn.
Read more
3 people found this helpful
Report abuse

gina
3.0 out of 5 stars Good
Reviewed in the United Kingdom on June 14, 2021
Verified Purchase
This book was good but didn't like some of the slang words used in it & I have never heard them before & found them annoying. I also found Frankie annoying one minute she seems grown up then next minute immature & clueless. I have never heard cafe,s been discriped or called diners unless they are American style/theme. Also what loving parent would want there child to put there life in hold for God's knows how many years as Alzheimer's/ dementia suffers can last alot longer than 9 years. Then you have Risk in fostercare & nobody but A 13year old girl notices he is getting abused not even social services or the school???? 🤔🤔🤷
Read more
One person found this helpful
Report abuse

Karen mcguiness
2.0 out of 5 stars Not worth the risk
Reviewed in the United Kingdom on June 16, 2021
Verified Purchase
I hate giving a bad review but this didn't do it for me . It had all the right ingredients but it was just off . Frankie the heroine was all over the place . old beyond her years thirteen year old then an immature twenty something the next . I felt sad for her not because of the hurdles she faced but because she had no dreams or aspirations of her own and just no depth . Self sacrificing didn't make her interesting or her any less dull . Risk the rockstar was slightly more interesting . The rest of the band added some more characters but as as frankie had no friends or life outside of her waitressing job there just wasn't a lot going on . But what really irritated me was the word diner in England we don't tend to use that if it's not a restaurant or a pub it's a cafe not a diner . Also if a married woman's husband dies that makes her a widow not a widower. I'm guessing the author is quite young and to be honest it shows .
Read more
Report abuse

L beaver
4.0 out of 5 stars Good read, plenty of angst and painful reunions.
Reviewed in the United Kingdom on June 12, 2021
Verified Purchase
Frankie had just found out that her mother was in the early stages of Alzheimer's when her boyfriend Risk got the news that he was getting his big break in music with a record deal. She told him she couldnt leave her mother and that they needed to go their separate ways because who knew what their future would be. He wasnt happy that she wouldnt see reason and spent the next nine years being a rock star with drink drugs and women. He thought she would understand that all his songs were about her when Frankie couldnt bear to listen to anything about him, it was just too painful. He went home sober and wanted to see her. Nothing had changed in their love for each other but Risk still thought that everything would fall into place and it didnt.
Read more
Report abuse
See all reviews