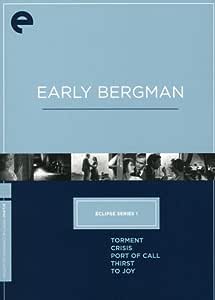 Ingmar Bergman (Director) Rated:
Unrated
Format: DVD
4.0 out of 5 stars 16 ratings
See More
Available at a lower price from other sellers that may not offer free Prime shipping.

Featuring: TORMENT (1944) In Ingmar Bergman's first produced screenplay, the dark coming-of-age drama Torment, Widgren, a boarding-school senior, is terrorized by his sadistic Latin teacher. When he falls for Bertha, a troubled local girl, he finds himself caught up even further in a web of emotional mind games. CRISIS (1946) Urban beauty-shop proprietress Miss Jenny arrives in an idyllic rural town one morning to whisk away her eighteen-year-old daughter, Nelly, whom she abandoned as a child, from the loving woman who had raised her. Once in Stockholm, Nelly receives a crash course in adult corruption and wrenching heartbreak. PORT OF CALL (1948) Berit, a suicidal young woman living in a working-class port town, unexpectedly falls for Gosta, a sailor on leave. Haunted by a troubled past and held in a vice grip by her domineering mother, Berit begins to hope that her relationship with Gosta might save her from her own self-destruction. THIRST (1949) A couple traveling across a war-ravaged Europe. A disintegrating marriage. A ballet dancer's scarred past. Her friend's psychological agony. Elliptically told in flashbacks, Thirst shows people enslaved to memory and united in isolation. TO JOY (1949) An orchestra violinist's dreams of becoming a celebrated soloist and fears of his own mediocrity get in the way of his marriage to the patient, caring Marta. Played out to the music of Beethoven, To Joy is a heartbreaking tale of one man's inability to overcome the demons standing in the way of his happiness

In Hollywood, falling in love is a happy ending; in Ingmar Bergman movies, love is only the beginning and the ending is always in doubt. But Bergman's reputation for gloom is undeserved; though the five films in Early Bergman have titles like Torment and Crisis, they bristle with life, in all its passion and tenderness (ironically, the bleakest of the lot is titled To Joy). Sadness and whimsy walk hand in hand: As a young woman puts on her lipstick, she draws a frowning face on the mirror; as a husband hears about his wife's death, a small boy turns a toy bear on a stool in the background.

Bergman's career began as a screenwriter with Torment, a noir-ish tale of a volatile student and his sadistic Latin teacher. Stylishly directed by Alf Sjoberg, Torment's script already has Bergman trademarks: Vivid, unpredictable characters, sexual frankness, and a skeptical view of cultural pillars, from romance to honor. Bergman's first directorial venture, Crisis, brings in another prominent element, the subtle yet powerful conflicts among women, as a young girl is torn between her shallow, flamboyant birth mother and the caring but conservative woman who raised her. The tensions between daughter and mother persist in Port of Call, one of the strongest in the set; a rebellious young woman, whose mother sent her to reform school, staves off suicidal impulses by falling in love with a sailor. This brief and depressing-sounding summary doesn't capture the fluid camera movement or the movie's emotional potency, which balances misery with yearning and hope. Thirst demonstrates an increasing narrative sophistication; as it depicts a troubled marriage, the movie plucks multiple storylines like a musician plucking the strings of his instrument. Music itself is a central concern of the last of these five films: To Joy, in which a self-obsessed violinist corrodes his marriage with fear and self-doubt.

There's a startling freshness and vitality to the performances in all of Bergman's films, made all the more striking in contrast to Sjoberg's (though Torment is far from stale). From the beginning, Bergman draws something genuine from his actors, soon developing a visual style that manages to be alluring yet seemingly effortless, never struggling for an arresting image but simply capturing the unexpected jolts of life. The movies in Early Bergman are more raw than his later classics (Wild Strawberries, The Seventh Seal, Fanny & Alexander), but sometimes talent can be most clearly seen in its less polished form. --Bret Fetzer

Faulkner & Joyce Fan
4.0 out of 5 stars Nice Addition to an Existing Bergman Collection
Reviewed in the United States on April 5, 2007
Verified Purchase
Am happy to see that Criterion continues to put out more Bergman as time goes on. This collection includes arguably the best work from his early period and features most often actors Birger Malmstem and Stig Olin, two regulars from this phase in Bergman's career. It is remarkable how versatile these actors are, delivering distinct performances from film to film.

The prints are good, the subtitles removable. Each disc is packaged separately in a plastic case, and there is a concise essay printed on the inside cover for each film. The five cases slide up into the wraparound cover, so this isn't deluxe packaging. No special features, but these films are really intended for the Berman aficionado, who will presumably have seen one or more of them already.

All five films are nicely shot, and two of them (Port of Call and Thirst) are even recommendable to general viewers unaware of Bergman or his corpus. To Joy could just as well have been called To Despair--it is one of the few Bergman films I find truly depressing, with its depiction of a tortuous relationship involving a beautiful and congenial Swedish girl, portrayed by Maj-Britt Nilsson. The other two films, Frenzy and Crisis, besides their visual quality, have historical interest as Bergman's first produced screenplay and directorial effort, respectively.

Not included in this collection of early work are (among other films) The Night Is My Future (1947), which had popular success in its day but is quite conventional, and Prison/The Devil's Wanton (1949), which, while a mature and personal work, might be considered plodding and heavy-handed.

Jim Altfeld
5.0 out of 5 stars Far Ahead of His Time
Reviewed in the United States on August 20, 2016
Verified Purchase
Bergman deserves all the accolades he's received and continues to receive.
Read more
One person found this helpful
Helpful
Comment Report abuse

FPB
5.0 out of 5 stars Early Bergman is worthy of classic Bergman
Reviewed in the United States on May 10, 2007
Verified Purchase
These films though early works are worthy of the genius of Bergman and in many cases more accessible for the understanding of the classic Bergman themes: man's struggle with the anguishes of life.

Recommended for the Bergman lover and those unacquainted with the poet of misery.
Read more
4 people found this helpful
Helpful
Comment Report abuse

elizabeth Wilde-Biasiny
5.0 out of 5 stars amazingly curated
Reviewed in the United States on January 14, 2013
Verified Purchase
first rate collection of Bergman, well packaged and curated. My daughter is getting a great film education. I will enjoy revisiting it when she is finished....
Read more
4 people found this helpful
Helpful
Comment Report abuse

Daniel Jacoby
4.0 out of 5 stars Nice Start for the Eclipse Series
Reviewed in the United States on April 26, 2007
Judging from this first entry, Criterion's new line, Eclipse, will be serving a valuable function for film buffs by providing high-quality DVD transfers of hard-to-find classic titles. The early Bergman films on display here look great, as expected from Criterion, although perhaps they're of more interest to Bergman completists than to the average filmgoer. They're all easy enough to watch, with Bergman's usual expertise with actors guaranteeing many interesting performances on display. But the major pleasure here is seeing the first appearance in these films of many themes that will be given deeper, more memorable treatment in such later works as PERSONA and SCENES FROM A MARRIAGE. The set's price is more than reasonable, the packaging attractive. Recommended.
Read more
7 people found this helpful
Helpful
Comment Report abuse

DL Nels
4.0 out of 5 stars Eclipse, cinema lovers new lover (a review of the box and Torment)
Reviewed in the United States on June 4, 2007
The new eclipse series by the Criterion Collection is great for bringing cinephiles everywhere the opportunity to see films like this. The film is not perfect nor does it entirely submerge the viewer, but for a real fan of cinema, or more particularly Bergman, you can ask for nothing more. The film reveals Bergman's roots, it has his signature dark, brooding characters and themes, desolate landscapes, if not, at times, his own imagistic stamp.

The story, however, is maybe the engaging side of mediocrity. The film draws you into the downward spiral of the main characters (the central focus of the story) without making the world seem hopeless and desolate. But it doesn't reach the pre-poop-your-pants euphoria it seems to promise. It's almost there, but doesn't realy ever clinch it.

The spiral of these characters is hidden within the world of the film. The torment, is silent, removed, intricate. The film is not what I expected from the early Bergman collection, and is not perfect, but is well worth the rent, for it's politics of the body, insight into Bergman's work and a subtle story that shames American suspense's absurdity, it's over-the-top plot structures, and its star driven sales. It's real, dark, flawed yet engaging. Worth a viewing or two.
Read more
4 people found this helpful
Helpful
Comment Report abuse
See all reviews

Alucard
5.0 out of 5 stars Need more of those
Reviewed in Canada on May 25, 2019
Verified Purchase
Great collection
Read more
Report abuse
See all reviews
Pages with related products. See and discover other items: criterion eclipse