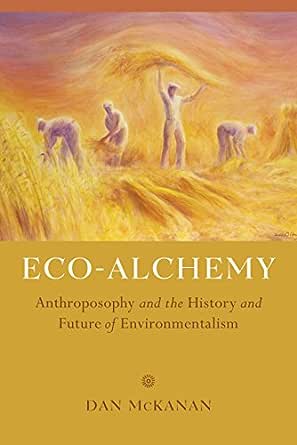 Eco-Alchemy: Anthroposophy and the History and Future of Environmentalism 1st Edition, Kindle Edition

Flip to back Flip to front
Audible Sample Playing... Paused   You are listening to a sample of the Audible narration for this Kindle book.
Learn more
ISBN-13: 978-0520290068
ISBN-10: 0520290062
Why is ISBN important?
ISBN
This bar-code number lets you verify that you're getting exactly the right version or edition of a book. The 13-digit and 10-digit formats both work.

Eco-Alchemy makes a solid case for the importance of anthroposophist initiatives to the evolution of modern environmentalism. . . . It deserves a wide readership among those interested in esoteric spirituality, environmental politics, and the controversial interaction between religion and public affairs.
, Reading Religion

"As its name suggests Eco-Alchemy describes an intermixing and re-constituting of ideas and good intentions that have been emerging and manifesting themselves over the last hundred years. [...] The analysis offered in Eco-Alchemy presents a very respectful and balanced picture of anthroposophy and yet does not shy away from describing the shortcomings and errors which have occurred over the years, nor the need to change, transform itself and learn from other progressive movements. It is an important work that should be widely available particularly to those undertaking a study of environmental philosophy."
, Camphill Pages Published On: 2018-04-01

"Eco-Alchemy is a welcome contribution to the study of esotericism and the history of environmentalism, both for its unique insights and for his attention to the influence of esoteric thought and practice on popular culture."
, Journal for the Study of Esotericism

"This is an exemplary book and a cause for celebration: a judicious, balanced, and well-informed discussion of Rudolf Steiner’s work."
, Journal for the Study of Religion, Nature and Culture --This text refers to the paperback edition.

“Throughout Eco-Alchemy, Dan McKanan’s sound judgment is evident. Without simplifying or exaggerating, but he gives space and respect to competing perspectives before offering a sensible middle position. All would be better if anthroposophists and ecologists would follow his wise opinions and recommendations.”—Robert McDermott, Professor of Philosophy, Cosmology, and Consciousness, California Institute of Integral Studies

“Eco-Alchemy makes an important contribution to our understanding of the environmental movement and, more specifically, the role of agriculture within that movement. In this well-written and informative book, Dan McKanan demonstrates that Rudolf Steiner and anthroposophy are critical to the evolution of contemporary environmentalism.”—Whitney Sanford, Professor of Religion, University of Florida
--This text refers to the paperback edition.

Dan McKanan is the Emerson Senior Lecturer at Harvard Divinity School and the author of several books on religion and social transformation, among them Touching the World: Christian Communities Transforming Society and Prophetic Encounters: Religion and the American Radical Tradition.
--This text refers to the paperback edition.

&;Throughout&#160;Eco-Alchemy,&#160;Dan McKanan&;s sound judgment is evident. Without simplifying or&#160;exaggerating, but he gives space and respect to competing perspectives before offering a sensible middle position. All would be better if anthroposophists and ecologists would follow his wise opinions and recommendations.&;&;Robert McDermott, Professor of Philosophy, Cosmology, and Consciousness, California Institute of Integral Studies

&;Eco-Alchemy&#160;makes an important contribution to our&#160;understanding of the environmental movement and, more specifically, the role of agriculture&#160;within that movement. In this well-written and informative book, Dan McKanan demonstrates that Rudolf Steiner and anthroposophy are critical to the evolution of&#160;contemporary environmentalism.&;&;Whitney Sanford, Professor of Religion, University of&#160;Florida
--This text refers to the paperback edition.
Read more

Alex
5.0 out of 5 stars Already I have recommended this book to several friends
Reviewed in the United States on June 20, 2018
Verified Purchase
This is a fascinating book. It is a very thoroughly researched history of rhe organic agriculture movement with particular reference to the influence of anthroposophy, the world view put forth by the Autsrian thinker, Rudolf Steiner. As such it is an eye opener and fills an important historical gap. Dr. McKanan takes no sides; he lays forth a picture. The reader is left quite free to process the information for him or herself. Already I have recommended this book to several friends.
Read more
One person found this helpful
Helpful
Comment Report abuse

Amazon Customer
5.0 out of 5 stars brilliant, entertaining, surprising
Reviewed in the United States on February 6, 2019
Verified Purchase
Dan McKanan manages to tell a new story with this book, which any student of environmentalism or anthroposophy should take heed of. Really entertainingly written, with a journalist's eye towards narrative, but with the discernment of a theologian. I found it both inspiring and informative, especially in regard to the ideas of Rudolf Steiner and his disciples, which do not usually feature in the standard environmental studies curriculum.
Read more
Helpful
Comment Report abuse
See all reviews