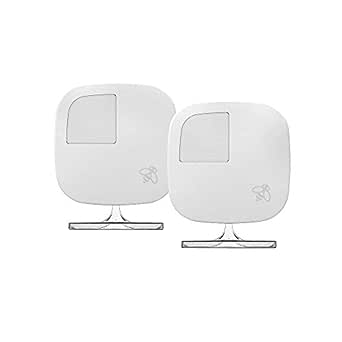 JWINK
4.0 out of 5 stars A bit pricey but makes the Ecobee 3 and 4's a well rounded system
Reviewed in the United States on March 12, 2018
Verified Purchase
Included with the sensors (2 in each pack), instruction manual, plastic stands, and wall mounting hardware.

I recently got two Ecobee 3 lite’s (which don’t include sensors) and an Ecobee 4 that has one but I wanted a bit more coverage on the different floors of my homes, because without the sensors it is just a regular wi-fi thermostat. The Ecobee thermostat’s main advantage is its ability to sense temperatures in various rooms with the extra sensors.

So, I order 4 room sensors of these to add to the 3-lites on the different floors. After some confusion with CS on how many sets are included (there are supposed to be two sets of 2), I finally received the 4 sensors. As another reviewer has said, there is some confusion with the Amazon page and for some reason, they can’t seem to figure out something priced per set, means more than one set (or pack) of sensors.

The sensors are very easy to install as you simply hold near the thermostat, pull the plastic battery tab and the thermostat automatically recognize it and asks to add it. You then select a name for it or give it its own unique name. It starts detecting the temperature immediately. I paired each sensor to different thermostats. Just hold the sensor next to the thermostat that you want to pair it to. The sensors do not interfere with one another. One small issue with the sensor is that it may read too warm initially, if you are holding it too long in your hand, making for an inaccurate average temp reading. Luckily, the sensor quickly corrects itself, but you may have your A/C come on briefly because of it.

The sensor is a simple square design with a logo and can be put on the wall or on the included stand. I do kind of wish the stand had a lock mechanism built in, although I haven’t really had any issue with the sensor staying on the stand. It is more for my being sure it will not fall off where it is.

My main complaint with the sensors are the lack of any type of low battery indicator. There is nothing on the sensors themselves and the Ecobee app does not tell you when the battery is low or dead. It may be some period of time before you notice it is time to change the battery, so it is an important function that should be added, with maybe a small led low battery indicator, along with the app letting you know as well. Each sensor requires a CR2032 battery when they need to be replaced. Just pop off the battery cover on the back and replace the battery. Considering these are low power device, the batteries should last several months or longer.

So far, they are working well at detecting motion and temperature. It remains to be seen though, the durability of the sensors. According to the specifications, the sensors have a 120-degree field of view and can detect motion up to 15 feet using an IR sensor. The sensors seem to detect occupancy for a period of time after the room becomes occupied.

Now these sensors, won’t create additional zones in your home as that is dependent on the system you have in your house, but will help create an average temperature between the various sensors to help heat or cool areas of the house that are occupied. You can manually adjust your vents to also aid in heating and cooling the areas of your home. For the sensors to be the most effective, it helps to enable the follow me and smart home settings in the sensor portion of the app.

The sensors have a good 3-year warranty.

I do think the sensors are a bit pricy at roughly 30 to 40 dollars each set (on sale) or more at regular price.

Andy
5.0 out of 5 stars This is two packages of two sensors (four total) Make sure Amazon gets it right!
Reviewed in the United States on February 2, 2018
Verified Purchase
I bought these to add sensors to every bedroom in my house. It makes balancing the HVAC system very easy and costs less than it would to hire a pro to do it, now every room in my house is within one or two degrees temperature difference.

A word of caution, this item is two, packs of two sensors. When my package arrived, I only received a single package with two sensors in it. I had to call customer service and their initial reply was that there are two sensors in the package. I had to explain that I could buy a single two pack for $60.00 right on Amazon, and for $68.00 from the local home improvement store. After review, the rep agreed that this was indeed supposed to be two packages of two sensors (four total), and shipped another, which I am awaiting delivery.

As far as the remote sensors and the ecobee in general (I have an ecobee 4), it's a great thermostat. it really does improve the overall comfort in my home.
Read more
8 people found this helpful
Helpful
Comment Report abuse

V. Rod
1.0 out of 5 stars More frustration than blessing
Reviewed in the United States on July 2, 2019
Verified Purchase
So I got these thinking that they would help cool my home evenly but it's been more of a headache then blessing. The pairing is very, very simple. You can name each one whatever you like to help you distinguish between your different sensors. I now have 3 with this addition. We have one in our master bedroom, one in our nursery and one in the living room. The first day we did not notice any difference. There were still some hot spots in the house so I got online and checked out the FAQs on Ecobee's website. After a week of owning, the hot spots increased with our master bedroom now being really hot at night.

Onto customer service experience. When I first bought my Ecobee years ago (1st gen) the customer service was GREAT! Zero wait time, very pleasant rep on the phone walking me through things. That experience was had several times. Until I bought these sensors. I contacted customer support to help me brain storm and the guy was not in a good mood. He literally answered the phone "do you need something." I gave him the benefit of the doubt and thought that maybe he was having a bad day, we all have those. As the conversation went on, his attitude didn't change and was just in an irritated mood the whole time. I changed some settings and gave it a few days as he suggested. Still, no luck and still our room is hot during the night.

I'm going to give the sensors another month and if there is no change, I guess I'll have to go to the dark side and buy a Nest instead. :(
Read more
2 people found this helpful
Helpful
Comment Report abuse

Never
5.0 out of 5 stars Better control of room temperatures
Reviewed in the United States on June 10, 2019
Verified Purchase
Upstairs, I've got a thermostat in the hallway, but the two bedrooms would often be too hot or cold. Now, when it's time to sleep, the Ecobee uses these room sensors to monitor the room temperature, rather than the hallway temperature. Kids are happier and I might even save a little electricity. Was very easy to setup.
Read more
3 people found this helpful
Helpful
Comment Report abuse

John S.
VINE VOICE
5.0 out of 5 stars Really helps level the temperature around the entire house
Reviewed in the United States on November 8, 2019
Verified Purchase
We currently have 6 of these throughout the house. Along with the programming on our Ecobee 3 we can keep the areas at the right temp. They are super easy to install and connect to the thermostat. I have notice the one placed the furthest away from the thermostat tends to eat batteries. Does not really matter what sensor is placed in that room it will get about 2 months time before needing the battery replaced. All sensors placed closer tend to last an extremely long time. Well over 8 months.
Read more
Helpful
Comment Report abuse

Kritty
4.0 out of 5 stars Easy to pair and working well
Reviewed in the United States on March 15, 2019
Verified Purchase
We bought these after installing our ecobee wall thermostats. We have two rooms, one upstairs and one downstairs, that are in two different heating and cooling zones. The sensors were easy to pair with the respective wall units and the overall system is working as desired.
Read more
One person found this helpful
Helpful
Comment Report abuse

D. Williams
5.0 out of 5 stars A must have for any ecobee owner
Reviewed in the United States on February 19, 2019
Verified Purchase
I had lots of hot and cold spots in the house. These really helped even things out. Now the house is nice and toasty when it's cold out side and nice cool when it's hot.
Read more
Helpful
Comment Report abuse
See all reviews

Page 1 of 1 Start overPage 1 of 1
This shopping feature will continue to load items when the Enter key is pressed. In order to navigate out of this carousel please use your heading shortcut key to navigate to the next or previous heading.
Back
Next
Pages with related products. See and discover other items: Electric Sensors, floor heating system