Ecocide: Kill the corporation before it kills us (Manchester University Press) Kindle Edition 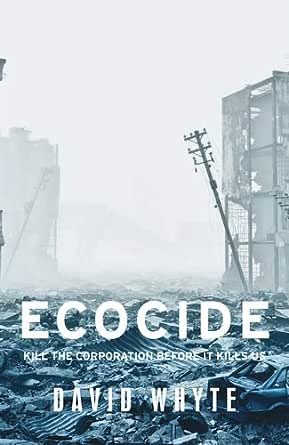 Flip to back Flip to front
Audible Sample Playing... Paused   You are listening to a sample of the Audible narration for this Kindle book.
Learn more
ISBN-13: 978-1526146984
ISBN-10: 1526146983
Why is ISBN important?
ISBN
This bar-code number lets you verify that you're getting exactly the right version or edition of a book. The 13-digit and 10-digit formats both work.

'Ecocide is a refreshing analysis of the huge damage wrought on people and planet by the multinational corporations that play such a significant role in all of our lives. Rather than trying - and failing - to regulate these corporate behemoths, Whyte makes a compelling case that we must rid ourselves of private corporations altogether. Fast paced, original, and highly compelling, Ecocide should be required reading for activists and academics alike.' Grace Blakeley, author of Stolen: How to save the world from financialisation 'This brilliant book not only offers solace to those struggling against invisible and, seemingly, invincible corporate power, it also throws us a lifeline through which we may be able to salvage everything we hold dear. Where the wall of callous indifference stands, Whyte paints a window to an alternative world away from this slow motion apocalypse. The survival of organised human life and avoidance of mass societal breakdown rests upon our ability to mobilise in demand of this alternative world. It is said “the corporation has no body to punish and no soul to condemn” and this book illustrates clearly that this kind of unaccountability is in no way exceptional to the neoliberal era, it is an inherent feature of the corporation as a shapeshifting structure of irresponsibility. Kill it so we may live.' Lowkey, Rapper and Activist 'With a sense of urgency, but without despair, David Whyte powerfully deploys the concept of ‘ecocide’ to rigorously reveal how corporations and their reckless pursuit of profit are at fault for the existential threat posed by climate change. The time has come for solutions that are at once radical and possible.’ Joel Bakan, author of The Corporation: The Pathological Pursuit of Profit and Power 'The timeliness of this brilliant account of the increasingly dire ecological consequences of the legal immunity of capitalist corporations could not be greater. At a moment when states everywhere are keeping corporations on life-support amidst the global pandemic of 2020, David Whyte's powerful rallying cry of 'death to the corporation' compels us to urgently address the question of 'what different form of industrial organization under what different forms of ownership' which has been for so long avoided, at such terrible cost.' Leo Panitch, author of Searching for Socialism: The Project of the Labour New Left from Benn to Corbyn 'This book will have a good audience among the Extinction Rebellion movement, who may not understand the DNA of business but still feel the effects of its monopoly and expropriation of nature. It can help guide their protests and reform policies, as it is clear that corporations are at the centre of the ecological plunder we see today in the world. Ecocide is also written in an accessible way for both undergraduates and postgraduates who study political economy and business – it has excellent examples and case studies of modern business conduct. It is short, concise and easy to understand and follow, with excellent notes and references. I certainly will be putting it on my reading list.' LSE Review of Books ‘Ecocide: Kill the corporation before it kills us provides an original, well-evidenced and scholarly argument that proceeds logically and in an engaging manner throughout the book. Each chapter can be taken alone, but when read together they not only alert the reader to the intrinsically ecocidal nature of the corporate form, they also provide a comprehensive and compelling argument for its dismantling. Although useful for an academic audience, this book will also be engaging for those beyond the academy with a more general interest in environmental harm.’ Journal of White Collar and Corporate Crime “A brilliant introduction to how to think and act to avoid the ultimate human catastrophe.” Richard Falk, Professor Emeritus of International Law, Princeton University and former United Nations Special Rapporteur on Palestinian Human Rights. “A compelling read…which ranges across political economy, legal theory and environmental studies with a fluency that is easy to admire and doesn’t just dump jargon on the reader… and changes our perspective on the problem of climate change.” Morning Star “The analysis of the connections across racialised capitalism, ecocidal corporate chains and neocolonialism is excellent. A thoroughly stimulating and thought-provoking book.” Peter Somerville, Emeritus Professor of Social Policy, College of Social Science, University of Lincoln. “A fabulous book, informative and clearly argued. I learned a great deal from it.” William K. Carroll, Professor of Sociology, University of Victoria, Canada and Co-director, the Corporate Mapping Project. “A hard-hitting look at the environmental impacts of all industries on our planet.” The Environment Magazine. “Compellingly lays out the chilling reality of how capitalist corporations are responsible for the threat of climate change.” October Books Cooperative “Expertly situates how corporations are the driving engine of the ecological meltdown…Indispensable for a conversation we must have now, before its too late.” Occupy.com --This text refers to the paperback edition.

We have reached the point of no return. The existential threat of climate change is now a reality. The world has never been more vulnerable. Yet corporations are already planning a life beyond this point. The business models of fossil fuel giants factor in continued profitability in a scenario of a five-degree increase in global temperature. An increase that will kill millions, if not billions.This is the shocking reality laid bare in a new, hard-hitting book by David Whyte. Ecocide makes clear the problem won’t be solved by tinkering around the edges, instead it maps out a plan to end the corporation’s death-watch over us.This book will reveal how the corporation has risen to this position of near impunity, but also what we need to do to fix it. --This text refers to the paperback edition.

We have reached the point of no return. The existential threat of climate change is now a reality. The world has never been more vulnerable. Yet corporations are already planning a life beyond this point. The business models of fossil fuel giants factor in continued profitability in a scenario of a five-degree increase in global temperature. An increase that will kill millions, if not billions. This is the shocking reality laid bare in a new, hard-hitting book by David Whyte. Ecocide makes clear the problem won’t be solved by tinkering around the edges, instead it maps out a plan to end the corporation’s death-watch over us. This book will reveal how the corporation has risen to this position of near impunity, but also what we need to do to fix it. --This text refers to the paperback edition.

David Whyte is Professor of Socio-legal Studies at the University of Liverpool --This text refers to the paperback edition.
Read more

Amazon Customer
5.0 out of 5 stars Think you are saving the planet???
Reviewed in the United Kingdom on January 6, 2021
Verified Purchase
This book popped up on a University based review and it's been a complete eye opener. is totally shocking, enlightening, enraging. book is easy to read with fab references. Highly recommended it and if you care for the planet, it's people or animals you must read it.
Read more
Report abuse
See all reviews