The Economic Process: An Instantaneous Non-Newtonian Picture and millions of other books are available for Amazon Kindle. Learn more
Share <Embed>
Have one to sell?
Sell on Amazon 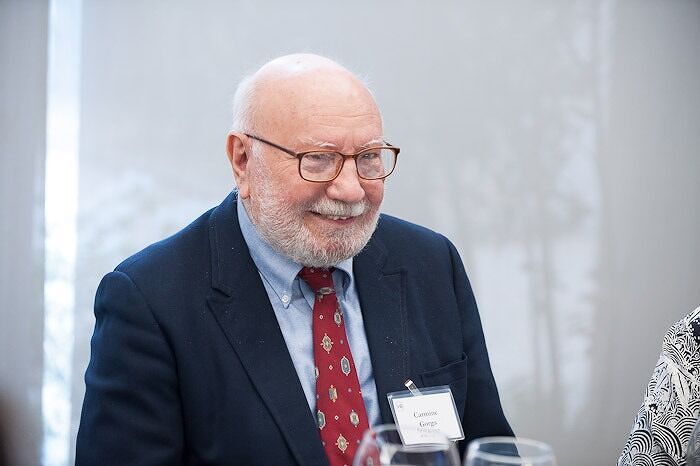 by Dr. Carmine Gorga (Author)
5.0 out of 5 stars 2 ratings
See all formats and editions
Sorry, there was a problem loading this page. Try again.

This work... • makes the economic discourse again intelligible to the ­layman • transforms economics from a linear to a dynamic and organic discipline • provides the framework for truly productive and just ­economic policies
Read more
Previous page
Next page

Carmine Gorga is president of The Somist Institute. He is a former Fulbright scholar and the recipient of a Council of Europe Scholarship for his dissertation on "The Political Thought of Louis D. Brandeis." In a book and a series of papers, Dr. Gorga has transformed the linear world of economic theory into a relational discipline. The resulting work, The Economic Process (2002), reached its third edition in 2016. Dr. Gorga is currently unifying economic theory, policy, and practice into Concordian economics. He is also integrating this work into political science (Somism), and culture in general, which he calls Relationalism.
Start reading The Economic Process: An Instantaneous Non-Newtonian Picture on your Kindle in under a minute.

Michael Emmett Brady
5.0 out of 5 stars 4.5 Stars-A dynamic systems (the economic system as a complex,evolving process)reinterpretation of Keynes's Y= C+ I model
Reviewed in the United States on July 8, 2007
Verified Purchase
This book will be extremely difficult to follow for a " modern" mainstream economist brought up on general equilibrium theory(g.e.t) and the stochastic version of g.e.t based on the assumption that all the relevant variables in any macro model of the economy can be analyzed either as( or as if) they were random variables that are independently and identically distributed so that some type of normal distribution(log normal,bivariate normal,multivariate normal,etc.)can be assumed, based on the central limit theorem,to apply to the time series data generated by capitalist economies.

The writing style of the book is similar to the writing styles of Veblen,Schumpeter,Keynes,and von Hayek.This means that the reader is going to have to think carefully about the fundamental nature of capitalism as a complex system evolving through time.Gorga's(G) concern is to identify what the fundamental problem is that prevents such a system from obtaining AND MAINTAINING a full employment level of output.Why is such an economy subject to a destabilizing boom-bust business cycle over time ? G is one of the very few economists to identify the fundamental problem as hoarding behavior.Hoarding means that the individual is not spending his income on consumption goods,investment goods,public goods,exported goods or imported goods.Hoarding problems will manifest themselves at the macroscopic level.Thus,involuntary unemployment can be identified as a macro problem that results from the microscopic hoarding behaviors of many individuals but will not be susceptible to a purely micro analysis based on utility maximization subject to an income constraint problem.It is an effective demand problem that shows up at the aggregate level.This,naturally,may present a major stumbling block for a modern day economist who believes that all macro behavior is merely the sum of all microbehavior.

G's framework of analysis is a reinterpretation of Keynes's syllogistic (double entry accounting) model of chapters 6(pp.63-65)and 10 that deals with the actual results.This is Keynes's simplist model and it can be used be demonstrate or establish the multiple equilibrium nature of the capitalist economy.Keynes' model specifies a positive relationship between consumption and investment spending(the aggregate demand side)that conflicts with the necessity for consumption goods and investment goods to be negatively related from the production side(aggregate supply side)of the analysis since full employment of all resources can only take place on the boundary of a production possibilities frontier.This boundary must have a negative slope.Keynes has introduced the possibility of a positive feedback effect.This effect is destabilizing.Speculative behavior can have catastrophic results if the commercial banking system is allowed to provide loans to speculators(hoarders)that allows them to try to leverage their private hoards so as to accumulate even more.For instance,Milton Friedman rejected Keynes's analysis because he felt that it was based on "excessive " liquidity preference.Naturally,Friedman views speculative behavior as stabilizing since he argues that it takes place under conditions of risk and not uncertainty.This distinction is fundamental Eliminating uncertainty and ignorance from decision making effectively eliminates hoarding behavior as anegative.

Keynes' model specification,however,does not allow him to specifically answer the question of why the economy is unstable.Keynes's answer is that the economy is unstable and suboptimal because of the propensity to hoard.Keynes calls this also by the name liquidity preference.Keynes can't show this in the Y=C+I modelsince there is no explicit role for money to play.Instead,Keynes demonstrates this in the expectations-uncertainty D-Z model of chapters 20 and 21.Keynes 's result is that if L2(the speculative demand for money) is greater than 0,you will have involuntary unemployment,which will increase as L2 increases.Gorga's reinterpretation of the Y model allows him to reach Keynes's conclusion as well as integrating it into a complex systems analysis(non Newtonian)as the economy evolves as a dynamic process over time.
G also shows that this is the major problem that has impacted all types of economies over the last 4,000 years and not just capitalist economies.This is also the major economic problem that has been identified by the Roman Catholic church during the many centuries that humans were subject to great uncertainty.Technically,it is impossible to eliminate all uncertainty which means that hoarding will be a problem.However,once identified,it's negative impact can be reduced to a minimum.Keynes states this on pp.241-42 and 351-52 but does not emphasize it for his economist audience.G emphasizes it and convincingly identifies it as the main problem.

There is one technical problem that appears throughout the book which may lead to confusion on the part of the reader.This is G's use of the symbol "=".This symbol must be interpreted to mean equivalence or equivalent to.I have deducted 1/2 of a star for this drawback.It can be remedied in a future edition.I would then give the book a 5 star rating.
Read more
5 people found this helpful
Helpful
Report abuse

Amazon Customer
5.0 out of 5 stars Five Stars
Reviewed in the United States on March 17, 2017
A great insight into the moral and value based outlook on economic theory.
Read more
Helpful
Report abuse
See all reviews