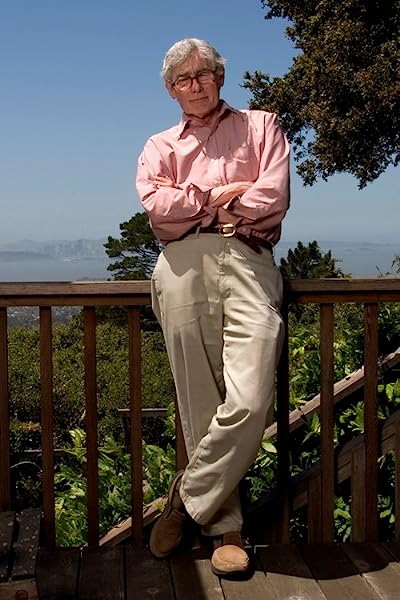 "A breakthrough book. It makes crystal clear that the natural world is not just an `environment' around us, but it is us, existing inside our souls and minds."--Jerry Mander

"A very exciting book of enormous interest for everyone concerned with the future of our species--environmentalists and legislators, industrialists and educators, you and me. Its message should become part of Western thought."--Jane Goodall

Theodore Roszak was a professor of history at California State University, Hayward, and is the author of many distinguished books, including The Voice of the Earth and Person/Planet. Mary E. Gomes teaches ecopsychology at Sonoma State University. Allen D. Kanner is a Bay Area clinician who teaches ecopsychology at the Wright Institute in Berkeley.

Jeffrey D.
4.0 out of 5 stars Its breath and depth sets a wonderful foundation, expansive not exclusive
Reviewed in the United States on January 19, 2016
Verified Purchase
A must for those interested in the rise of ecology and psychology. This early piece becomes a primer for the works that expand and enrich the themes begun here. Its breath and depth sets a wonderful foundation, expansive not exclusive. This aspect for me is important since I find so many needed sources on ecology get stuck on one topic area of interest, which is fine. All I intend to report is that to be inclusive brings the desperate pieces together: connections become visible and relational ties to other areas, such as race, feminism and earth-centered spirituality are, as a result made stronger. It is an engaging read that certainly opens the door for further reading about vital topic for our times.
Read more
2 people found this helpful
Helpful
Comment Report abuse

Tom the Bike Guy
5.0 out of 5 stars It will open your eyes, heart,and mind
Reviewed in the United States on February 3, 2000
Verified Purchase
Page 12, "if the self is expanded to include the natural world, behavior leading to the destruction of this world will be experienced as self-destruction". I think I have been somewhat of an ecopsychologist for some time now, but haven't realized it. This book brought to an organized sense, ideas, thoughts and feelings I already had. More importantly it introduced me to MANY new insights and thoughts about our planet and how we view it and treat it as NOT ME, when in fact, not only is it part of ME, but moreso, we are part of it. This is a very comprehensive book that takes us from theory, into practice, then to cultural and political issues, and onward with over 150 titles of suggested reading. Ecopsychology is a growing somewhat underground movement, a movement however, that many believe will come to fruition in this day and age of our concrete jungles, addiction to science and technology, and our general detachment from our original mother, the Earth. There are approximately 25 contributors to this book, a few, I must admit offer very dry reading. Overall however, this is one of the most enlightening books I have read. If you have even a general interest in Nature or Psychology, you would enjoy this book.
Read more
51 people found this helpful
Helpful
Comment Report abuse

Lois Field
4.0 out of 5 stars Is our mental health a problem of a nature deficiency
Reviewed in the United States on May 12, 2014
Verified Purchase
Taking psychology from a self centered approach and going further than psychology has gone before by looking at the whole of the experiences in a person's life including the feelings one has about the environment and nature is the basis for this collection of articles. This makes complete sense to me when I feel depressed when being closed up in a building and separated from the outdoors for any length of time.
Read more
5 people found this helpful
Helpful
Comment Report abuse

Sebastian Romero
5.0 out of 5 stars Five Stars
Reviewed in the United States on May 9, 2018
Verified Purchase
Beautiful and refreshing
Read more
One person found this helpful
Helpful
Comment Report abuse

JB
4.0 out of 5 stars Ecopsychology: Restoring the Earth
Reviewed in the United States on September 23, 2012
Verified Purchase
Got the book for school. Not something I would have picked to read for fun but very interesting just the same. Eye opening with regards to what we are doing to the earth because of our lifestyles and the drastic measures we have to take if we want the human species to continue. Read it.
Read more
One person found this helpful
Helpful
Comment Report abuse

C. Bosacki
3.0 out of 5 stars Tough read, but worth it
Reviewed in the United States on August 14, 2011
Verified Purchase
I'm not a psychology major-I'm sure I would get more out of the book if I was, but I am very interested in the relationship of the human psyche to nature. Some of the essays are easier to read than others,
Read more
Helpful
Comment Report abuse
See all reviews

The psychology of Earth's exploitation - and its reversal?
By Howard Jones

Even though it was published more than a decade ago, during which our planet's resources have been further exploited, this book is such a mine of information and ideas that it is still highly relevant today. It is an expansion of the theme of Roszak's book The Voice of the Earth introducing the concept of ecopsychology. In its message it is complementary to books by other authors like Lester R. Brown, Thomas Berry, Thom Hartmann and Alastair McIntosh. Where this book is unique is in the concentration on human psychology that has led to the parlous state of the Earth and on suggestions for the kind of mind-set we need to adopt for the future.

As the title indicates, this book is mainly about the interaction of ecology and psychology. Paul Shepard tells us we need now to have an environmental revolution to succeed the agricultural and industrial revolutions. The last of these was inspired by the dualistic philosophy of Descartes, separating mind from body, and the philosophy of Francis Bacon urging exploitation of the natural world. We need to feel a oneness with Nature as a child should feel at one with their environment, or lovers at one with each other. We must encourage what E.O. Wilson called biophilia, a love of Nature that goes far beyond romantic sentimentality.

Both science and Judeo-Christian religion have rejected any concept of animism - soul or spirit in the natural world - and Freud mostly described the ego as bounded physically by the skin. These ideas have created a separateness of humankind with regard to other animals, trees or rocks. Because of our addiction to material acquisition, which Eastern mysticism acknowledges as the root of suffering, we are in denial about the havoc we are causing in Nature: `Our inability to stop our suicidal and ecocidal behaviour fits the clinical definition of addiction or compulsion: behaviour that continues in spite of the individual knowing that it is destructive. . .', as Alan Durning tells us in his chapter. Such consumerism has become the economic and philosophical basis of western society. Reversing this does not mean depriving people of essential goods and services: `To the contrary, life's most meaningful and pleasant activities [such as conversation, family activities, creative pursuits, appreciation of Nature] are often paragons of environmental virtue.' Allen Kanner and Mary Gomes see this need for continual material acquisition as a form of narcissism - one of the recognized personality disorders. These authors also have another chapter on feminist psychology.

Stephen Aizenstat in his chapter deals with the relevance of Carl Jung's Depth Psychology to this ecocrisis: it is to Jung with his collective unconscious that we must turn for psychological counsel. Anita Barrows explores how developmental psychology can be used to `keep our children as sane as they were when they were born , , , there is no question but that the way the world shapes the minds of its male children lies somewhere close to the root of our environmental dilemma' and Betty Roszak believes `our compulsively masculine science and technology . . . lies at the root of our environmental disconnection.' Terrance O'Connor sees a connection between the breakdown of interpersonal relations and the bond we should have with our environment.

This gives only a brief glimpse of a book that provides a useful if somewhat academic treatise on the relevance of psychology to our environmental crisis. Alas, no easy solutions are given, other than an exhortation to try to resolve these issues. The book might also have benefited from an index.

Dr Howard A. Jones is the author of The Thoughtful Guide to God (2006) and The Tao of Holism (2008), both published by O Books of Winchester, UK.

Outgrowing the Earth: The Food Security Challenge in an Age of Falling Water Tables and Rising Temperatures
The Last Hours of Ancient Sunlight: Waking Up to Personal and Global Transformation
The Great Work
Hell and High Water: Climate Change, Hope and the Human Condition
Read more
9 people found this helpful
Report abuse

Andrew Hurst
5.0 out of 5 stars Want to stir up that latent environmentalist in you?
Reviewed in the United Kingdom on July 5, 2018
Verified Purchase
A wonderful book that helps you to understand the connection between our internal world and the world around us. I have given this book as a gift to a few people as it had such a big impact.
Read more
One person found this helpful
Report abuse

bright spark
5.0 out of 5 stars a book which has touched me deeply
Reviewed in the United Kingdom on December 19, 2008
Verified Purchase
I have loved reading this book. I haven't felt so moved by a non-fiction book for years. This collection offers a variety of perspectives on understanding ourselves as fundamentally connected to the world. It offers new intellectual understanding, but for me was also personally life changing. I am really excited by this way of seeing things and for the first time find I can face the ecological crisis with which we live without feeling so overwhelmed that I am unable to act...
Read more
9 people found this helpful
Report abuse