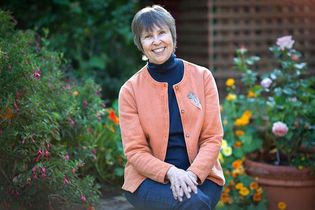 by Rosalind Creasy (Author)
3.9 out of 5 stars 9 ratings
Part of: Edible Garden (13 books)
See all formats and editions
Sorry, there was a problem loading this page. Try again.
Offers details on planting, growing, and harvesting heirloom vegetables and provides recipes for pickles, soups and salads, side dishes, and main dishes
Read more
Previous page
Next page

The first installment in Creasy's (Cooking from the Garden) new Edible Garden series spotlights horticulture's most affordable antiques?heirloom vegetables. Framed in a lively, colorful format, Creasy's down-to-earth style proves just right for her folksy subject, as she explains the importance of seed preservation in maintaining a healthy, diverse gene pool and visits heirloom display gardens from historic New England to the wilds of Idaho. An encyclopedia of venerable varieties sporting such colorful names as "Hoffer's Lazy Wife" beans and "Howling Mob" sweet corn is downright irresistible, and Creasy includes a useful, generous listing of sources for heirloom seeds and plants in the appendices. In addition to hands-on information about growing, harvesting and saving seed, Creasy also offers a robust selection of recipes for cooking and preserving the bounty, from Grandma Dorothy's Watermelon Pickles to such traditional Colonial dishes as Fried Cucumbers and Carrot Pie. This splendid overview of a gardening niche that's becoming increasingly popular is also jam-packed with Creasy's tantalizing photographs, which make a strong case for growing these heirlooms not only for their historical value and their flavor but for their beauty. (Mar.) FYI: Published simultaneously in the series are Italian, Flower, Herb, French and Salad.
Copyright 1999 Reed Business Information, Inc.

"If any one person can be credited with elevating the status of the vegetable in American gardens, it's Rosalind Creasy." -- Garden Design

"Rosalind Creasy books always brighten my day...They are full of colour and energy and enthusiasm...and some startling ideas." -- Southam Newspapers

Rosalind Creasy is an award-winning garden and food writer, photographer, and landscape designer with a passion for beautiful vegetables and fruits combined with the strong conviction that gardening should be an ecologically positive endeavor. Her first book, the bestselling "The Complete Book of Edible Landscaping," written in 1982, stood as the seminal book on the subject for more than 25 years. It was one of the first American landscaping books to advocate organic methods, encourage recycling, and provide alternatives to resource-wasting gardening techniques. It served to move edibles out of their former sheltered backyard existence into the prominence of the front yard. Since the book’s publication, the term “edible landscaping” has become part of horticultural, architectural, and common jargon.

An accomplished photographer, Ros was among the first to photograph the then-unknown heirloom tomatoes and melons, blue potatoes and corn, mesclun salad greens, and edible flowers. She popularized these and other outstanding, but little-known vegetables, in her 1988 book "Cooking From the Garden." Once again her writing broke new ground, introducing the American public to a vast new palette (and palate) of vegetables like candy cane striped ‘Chioggia’ beets; purple, red, white, and yellow carrots; ‘Rosa Bianca’ eggplants, baby bok choi, ‘Rainbow’ chard, chipotle peppers, purple artichokes, and other culinary delights that started out in high-end restaurants and now are seen in farmers markets and home gardens across the country.

Frustrated by America's penchant for lawns, for the last twenty-five years Ros has used her front garden to showcase an ever-changing display of edible ornamentals from A to Z, including ‘Pink Pearl’ apples, thornless blackberries, purple cauliflower, Kaffir lime, variegated peppermint, and golden zucchini and in themes as diverse as a Magic Circle Herb Garden to The Wizard of Oz, Alice in Wonderland, and a vegetable maze. Her engaging gardens welcome friends and neighbors; children regularly stop by to feed the chickens.

Rosalind is a much sought-after speaker and lecturer, addressing groups as diverse as Master Gardeners, Idaho Landscape Designers, horticultural societies from coast to coast, the Garden Writers Association, college landscaping programs, Celebrity Cruises, Seed Savers Exchange Annual Convention, Monticello, and Colonial Williamsburg. Her magnificent photography—not only of her own unique and enviable gardens, edible harvests, and cuisine, but also of gardens and gardeners she has visited—enriches her talks, enticing and inspiring audiences across the country.

Her varied and unique skills are in high demand. For more than a decade, she has been the exclusive photographer for a number of calendars, including the best-selling Seed Savers Calendar. In the past few years, Ros’ photography and writing have been featured numerous magazines including Mother Earth News, Gardening How-To, Country Decorating, Sunset magazine, The LA Times, and Southwest Airline’s Spirit Magazine. She has been a guest on NPR’s "Science Friday with Ira Flatow" and APM’s "The Splendid Table" with Lynn Rosetto Casper.

An acclaimed landscape designer, her gardens range beyond California, with design installations at The New York Botanical Garden and Powell Gardens in Kansas City.

Marisa Hutchison
5.0 out of 5 stars Edible Garden
Reviewed in the United States 🇺🇸 on June 12, 2014
Verified Purchase
What a delightful book by Rosalind Creasy about heirloom garden edibles. There are actually more things we can grown ourselves and enjoy eating. Love her descriptions and growing tips.

For gardeners at any level, beginners to advanced. This book has something for everyone.
Read more
Helpful
Report abuse

monica1354
5.0 out of 5 stars Five Stars
Reviewed in the United States 🇺🇸 on November 24, 2014
Verified Purchase
thank you will be a great resource in my library
Read more
Helpful
Report abuse

SeaShell
4.0 out of 5 stars Valuable for the recipes
Reviewed in the United States 🇺🇸 on February 27, 2011
Rosalind Creasy is known for her beautiful gardening books that are chock full of eye-candy, and in that way this book does not disappoint. However, with the recent proliferation of heirloom vegetable catalogs, like Bakers Creek and Seed Savers, a lot of the information Creasy provides on heirloom varieties is easily found in free catalogs.

Where the book's value lies, however, is the second two thirds of the book, which provides historical recipes and methods for cooking with heirloom vegetables. The ingredients are simple, the recipes are easy, and the results are delicious, making this a terrific addition to the kitchen for any gardener.
Read more
4 people found this helpful
Helpful
Report abuse

MKC
3.0 out of 5 stars not what I thought It would be
Reviewed in the United States 🇺🇸 on February 27, 2009
When I purchased this book I thought it would help me plant a garden but it was more of a discription of each plant. It was interesting reading but didn't really help much on how to go about gardening.
Read more
6 people found this helpful
Helpful
Report abuse
See all reviews