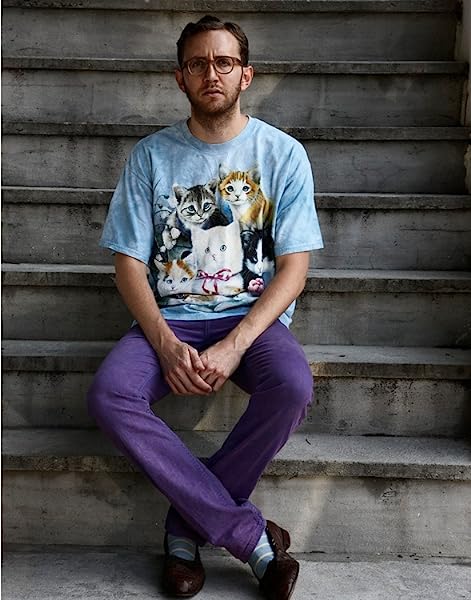 Todd Selby is an interiors, fashion, and portrait photographer and painter whose work has been featured in British Vogue, Nylon, New York magazine, and the London Sunday Times. He lives in New York City. Sally Singer is the editor of T: The New York Times Style Magazine. She lives in New York City. Chad Robertson is the James Beard Award–winning co-owner of Tartine Bakery in San Francisco.

Start reading Edible Selby (The Selby) on your Kindle in under a minute.

J. Berman
5.0 out of 5 stars Food as an adventure
Reviewed in the United States on December 29, 2013
Verified Purchase
Todd Selby is not a chef. Rather, he is a photographer and illustrator. Since food really is the universal language, not being a chef didn’t stop Selby from culminating a book bursting with great food, interesting characters responsible for that food and whimsical dialog that runs droll and, often, irreverent. I like a little cynicism sprinkled on my eggs; it awakens the taste for digesting some different writing. Edible Selby is definitely different; it is not a cookbook and really will not fit neatly into your kitchen collection. Part travel, part food, part photo collection, Edible Selby speaks to me like few other books in the ‘food lit’ category have. Not shockingly pretentious or lavishly produced with way too many filtered pictures and hands-all-over-the-food shots, Todd Selby writes and shoots with an honest voice and wide-angle eye.

What is Edible Selby all about? Take a camera, a willing food adventurer and a crafty pen and spread them all over street food, awkward kitchens, artsy eateries and shake liberally over the myriad colors that usually make up the sect called Cooking. That would be a start.

Each ‘story’ opens with a photo or two of the kitchen characters in their native surroundings, usually artfully decorated with a Selby-drawing. A face to each story, there is a vignette on who we are going to meet and a little on their operation. The photo captions are hand-written and simple; not rustic, but concise and honest. A telling written interview is next, with questions about one or two well-known facets of the particular character’s life we are exploring. This little tell-all has a bit about the philosophy of our character’s psyche as well as some technical insight.

What are the two kinds of pizza on your menu?

Selby is a visual instructor. There is a enough verbiage to curate the illustrations that don’t necessarily need curating. The photos are conspicuously composed and frequently, in keeping with theme of the collection, candid. The honesty Selby uses comes through in his voice and visual aids, much as the food and food creators of whom he opts to focus.

Food and psyche, with a glimpse at the tools that make the food that make the people make them want to make food for you. In just under 300 pages, there are eclectic (and even illicit... if food can be illicit) looks at urban food experiences, craftily made cheese, subterranean urban fishing, tattooed bakery operators, and hippie foodies. Mostly all of the contenders in Edible Selby are hippie-ish in their collective food beliefs. There are a handful of ‘prescriptions’ for food along with some recipes. But that isn’t the point of Edible Selby. No, gratefully, this is a primer for that common language and those that are fortunate enough to live vicariously through Selby’s lenses.

MGoldstone10
5.0 out of 5 stars The most Fun Cook Book Ever! Edible Selby is Preamble Script for TV Series
Reviewed in the United States on October 14, 2012
Verified Purchase
Anyone who watch Bravo, HGTV or The Food Channel, and who had the delight of reading Edible Selby, will understand why I think this will be the basic for a hit TV show. It's an entertaining and unique cookbook for foodies and style fans. From the very first page of beautifully shot photographs and stylish hand written messages, you see a great deal of love went into this production that travelled around the world. Even it's pullout stickers and colorful table of contents will identify this cookbook is like no other. It's a travel and pop culture feast too.

Todd Selby is on his way to building "The Selby" into the next superstar brand. A must read and proudly display at home book, and perfect for gifting.

C. Owings
5.0 out of 5 stars Armchair Eating!
Reviewed in the United States on November 11, 2012
Verified Purchase
Loved this book for its delightful idiosyncrasies! Photographs of food makers of all stripes aside hand-written interviews by Selby made me rush to my kitchen to whip up the salted caramel apple pie from the Four & Twenty Blackbirds sketched recipe. The author captures with grace, the stories of food makers in hidden places, bustling cities, and backyard beaches. The underlying focus of the book is more about foodways and culture than recipes, leading the reader to open h/her mind to the myriad ways creatively prepared food is important to our planet and its diverse peoples. This storybook is a visual trip and from opening the cover to reading to the end took me through one entire night!
Read more
3 people found this helpful
Helpful
Comment Report abuse

Jason R Havard
1.0 out of 5 stars Would have been great if legible!
Reviewed in the United States on August 12, 2015
Verified Purchase
The second cookbook I ever wanted to return out of hundreds! Who ever came up with the twee idea of having it all handwritten in a nearly indecipherable script and colour should be fired. The photography is gorgeous and what I could read of it was interesting, but theres the rub, what I could read of it. The only good thing about buying this was that it wasn't a gift or someone else would have been as disappointed as I was.
Read more
One person found this helpful
Helpful
Comment Report abuse

Joshua D. Dale
5.0 out of 5 stars It feels like your on the best cooking travel show ever!
Reviewed in the United States on August 12, 2019
Verified Purchase
Great photos. Great articles. Great things to learn. This one of my top favorite books I own!
Read more
Helpful
Comment Report abuse

Stuart Worthington
4.0 out of 5 stars Eddible Selby is a great gift for fathers, mothers, or friends.
Reviewed in the United States on May 2, 2013
Verified Purchase
The pictures within this book are awesome. They make you wish you could eat everythingt that is being cooked in front of you.

With that being said, A lot of the words and recipes can't be read because it is Selby's hand writing. Be prepared for a long sit down.

It does have intelligent reading about each and every person in this book.

I suggest this book for sure,

Low Blood Sugar
5.0 out of 5 stars My girlfriend loved it!
Reviewed in the United States on December 15, 2012
Verified Purchase
I bought this as a holiday gift for a special lady. She loved the photos and the drawings. The handwritten text is legible and fun. We haven't tried the recipes yet, but I can't wait!
Read more
2 people found this helpful
Helpful
Comment Report abuse

Hannah McDonald
4.0 out of 5 stars It's good.
Reviewed in the United States on January 7, 2013
Verified Purchase
I had brought 'The Selby Is In Your Place'
It's set out just as nicely as that book, however, not as interesting. (Don't get me wrong, it's a good book but I'm comparing it to something better)

If you liked the other Selby give it a go. Has some great recipes and interesting people in it.
Great gift idea.
Product came brand new and nicely packaged. Not Damaged at all.

Alexa T.
5.0 out of 5 stars fantastic book
Reviewed in the United Kingdom on December 24, 2018
Verified Purchase
I have read this book over and over - a wonderful book to get lost in
Read more
Report abuse

Jon Pearson
5.0 out of 5 stars Perfect
Reviewed in the United Kingdom on January 22, 2015
Verified Purchase
Great book with great ideas - my wife loved it for Xmas and so do I! Delivered on time and perfect condition.
Read more
Report abuse