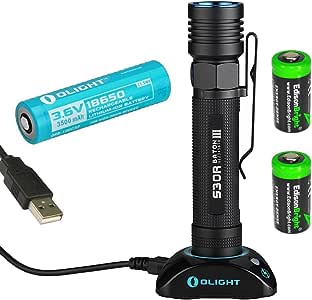 Visit the EdisonBright Store
4.2 out of 5 stars 220 ratings
| 32 answered questions
Currently unavailable.
We don't know when or if this item will be back in stock.

Smooth aluminum reflector and hardened glass lens give 99% light transmission rate
The S30R III is shorter than the previous generation by 3mm
Magnetic tail cap can be secured to ferrous metal surfaces for hands-free usage
Includes USB desktop charging dock
Compatible with Olight magnetic charging cables which can be used for charging on the go
Low power indicator under the side switch glows red when the battery voltage is running low (below 3.1V)
Thermal management program to protect the users' hands and flashlight from heat. The 1050 lumen turbo mode will stay on for two minutes before stepping down to the 500 lumen high mode within one minute.
Direct access to turbo mode: when the flashlight is not under lockout mode, double click to activate the turbo mode.
Timer function: long timer (9 minutes) and short timer (3 minutes)
Multi-function side switch
Remembers last used mode via memory function
Aircraft-grade aluminum body
Anti-scratch type III hard anodized
Lock-out function prevents accidental activation

Bundle include 2X EdisonBright CR123A lithium back-up use batteries.(Non-rechargeable. Do not place on charging dock with these batteries in flashlight.)

4.2 out of 5 stars
4.2 out of 5
220 global ratings
How are ratings calculated?
To calculate the overall star rating and percentage breakdown by star, we don’t use a simple average. Instead, our system considers things like how recent a review is and if the reviewer bought the item on Amazon. It also analyzes reviews to verify trustworthiness.

WD
5.0 out of 5 stars Olight S30R Baton - Great Light
Reviewed in the United States on February 22, 2015
Verified Purchase
I've had this light, and an Olight S10R which I ordered at the same time, for about 4 weeks now. I use them both every day. I previously used an Olight S10 Baton with a rechargeable battery in it, and had to take the battery out and put it on a charger every night. These new lights eliminate that hassle. The charger base works great. Very easy to use. Nice design.

Comparing the S10R (400 Lumens) to the S30R which is rated at 920 Lumens with the rechargeable battery installed, I don't know that the S30R is more than twice as bright as the S10R, but it is definitely much brighter. In fact, it's pretty blinding, so unless you are looking for a weapon light that needs to send daylight out to 300 yards, the S30R works just great. It's not real obvious from the description, but the instruction sheet that comes with the light says that it puts out 1000 Lumens with two CR123A batteries installed, and 920 Lumens with the 18650 battery installed. Seems a bit misleading to say it's a "1000 Lumen LED Flashlight with type 18650 3400mAh Li-ion battery". It's only capable of 1000 Lumens with the two CR123A batteries installed, if I'm reading the instruction sheet right. Of course, I'm not sure that I could tell the difference between 920 Lumens and 1000 Lumens anyhow.

Some people have commented on the fact that the on/off button is hard to find or hard to operate. My old Olight S10 Baton just had a raised button on the side, and it was possible for it to turn on in your pocket occasionally. It does have a lock-out feature (as do the S30R and S10R) but even with that, it was possible for the button to be depressed in one's pocket long enough for the light to turn on. So Olight improved that situation by making the on/off button flush with a bezel that surrounds the button. The flush mounting of the button makes it more difficult to turn the light on accidentally, and it also makes it more difficult to turn the light on on purpose. I really don't find the button to be an issue. It works fine once you get used to it. I would not, however, consider any of these lights to be ideal for tactical situations where you need to be able to turn the light on immediately and without any searching for the button, and without playing around with various operating modes. In those situations, a light with an end-cap button and only one mode is what I would want. But for an EDC light, or a work light, the S10R and S30R are both ideal in my mind.

One other comment I used to use a similar light made by another manufacturer. I had two of those lights fail the first time I dropped them on a concrete floor. I have dropped my S10 Baton on the concrete probably 10 times since I've had it, and it has never failed. I've dropped the S10R 2 or 3 times and it just keeps on working. I expect the S30R will be just as rugged, although I haven't dropped it yet. These Olight Baton lights seem to be pretty darn tough. These are great lights.

Markwathne
1.0 out of 5 stars 5 year warranty no good
Reviewed in the United States on April 9, 2018
Verified Purchase
have had numerous problems with this light. most recent was that the charging dock base quit working and the red light on the base just flashes red indicating a fault. Contacted Olight about their 5 year warranty on their products and was told that the dock (which is part of the light when you purchase it) is only covered by a 2 year warranty. Reading lots of flashlight web sites, this charging base is a known problem with Olight. I own 5 Olight flashlights and headlamps and will not buy another.
Read more
5 people found this helpful
Helpful
Comment Report abuse

Jerry S.
5.0 out of 5 stars It’s bright with a great beam.
Reviewed in the United States on October 4, 2018
Verified Purchase
I love the fact that this is a rechargeable flashlight. I don’t buy flashlights that you have to buy new batteries for. The charging base even has another USB port so you can use it for other things. I have a couple of these lights from Olight and I have my Mini gun light cord plugged in. The beam on this is nice and very clear. It has a lockout on it as well. Just read the little instructions and you can see how to use it so it doesn’t get bumped on in your pocket. I bought this one to put in my man purse. LOL. I had another battery light in there and I forgot to replace the batteries and they corroded on me, ruining that light. I have other brands of rechargeable lights too but this one is really bright and small and perfect for bags or pockets. It has a clip that can be used two ways to hold it light up or down. Pretty neat. It works great so far!
Read more
Helpful
Comment Report abuse

Al
2.0 out of 5 stars Unreliable, do not buy.
Reviewed in the United States on October 12, 2018
Verified Purchase
I really wanted to like this light; it’s compact and bright, but this light is full of issues. At first the light would shut off on its own and refuse to charge, tail cap was replaced under warranty. Then the same thing started happening again a while later and had the tail cap replaced again. Now the light charges properly but shuts off on its own if bumped or rocked a little.

No way would I trust this light for EDC, simply unreliable, looking to replace it with a proper Streamlight.

Jeff Cholewinski
5.0 out of 5 stars Great light, but not the one I ordered
Reviewed in the United States on October 6, 2017
Verified Purchase
Great little flashlight, has the charging base and USB port. Quality of craftsman ship great as with all olight torches. Excellent spot with a good spill. I'd recommend olight products without hesitation, this one is no different.
However
Ordered the s30r II for the fact that the pocket clip is toward the battery cap end of the torch like in the picture. I had become accustomed to this due to several years of carrying this specific light. Ordered this specific one and they sent the third revision instead of the second. Different button with no charge indication, different clip orientation and no glow in the dark bezel. A bit of a let down, since the description and photos indicate the 2nd iteration of the S30 line. Had they notified me the older model was sold out or discontinued, I would have looked elsewhere. Will be giving this one a shot, hope it holds up as well as the gen 2!

Michael Vela
5.0 out of 5 stars Saved my Life!
Reviewed in the United States on April 3, 2018
Verified Purchase
I've owned several flashlights over the years, but this is, hands down the best flashlight i've ever owned. Battery has great long lasting life, case is durable and is small enough to keep comfortably on my person everyday.

I was biking late last night when a pitbull broke loose from its fenced yard, charging after a friend and I. With little time to react and not wanting to grab my CC weapon, i garbbed my Olight Baton and hit the strobe feature. The pitbull stopped dead in its tracks from a full charge. Allowing my friend and I to exit without harm.

Trust my opinion
1.0 out of 5 stars Olight is garbage
Reviewed in the United States on July 17, 2016
Verified Purchase
I really wanted to like this light. I had an s10 first and the button malfunctioned in the first week. Upgraded to this light and nothing but problems too. Forget about keeping this in your pocket. Any nudge to the button will turn the light on. The clip lasted about 2 weeks. The clip broke on my s10 as well. Charging on the base is a crap shoot. Sometimes it charges, sometimes it doesnt. Customer service told me to contact seller and basically wrote me off. I Ending up buying a fenix and have been much happier. Fenix is holding up much longer than both of my olights put together and I've only had it a few weeks. That's pretty sad.
Read more
3 people found this helpful
Helpful
Comment Report abuse
See all reviews

Page 1 of 1 Start overPage 1 of 1
This shopping feature will continue to load items when the Enter key is pressed. In order to navigate out of this carousel please use your heading shortcut key to navigate to the next or previous heading.
Back
Next
Pages with related products. See and discover other items: flashlight uses 18650 battery, strong hands, task lighting, rechargeable lumen flashlight, cr123a flashlight, Olight Flashlights