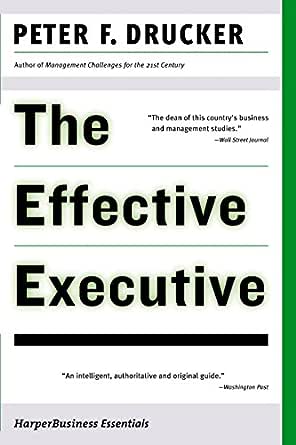 Flip to back Flip to front
Audible Sample Playing... Paused   You are listening to a sample of the Audible narration for this Kindle book.
Learn more
ISBN-13: 978-0060833459
ISBN-10: 0060833459
Why is ISBN important?
ISBN
This bar-code number lets you verify that you're getting exactly the right version or edition of a book. The 13-digit and 10-digit formats both work.

'...it would be difficult to overestimate his contribution to management thinking'
Financial Times --This text refers to an alternate kindle_edition edition.

Born in Vienna in 1909, Peter F. Drucker was educated in Austria and England. From 1929 he was a newspaper correspondent abroad and an economist for an international bank in London. Since 1937 he has been in the United States, first as an economist for a group of British banks and insurance companies, and later as a management consultant to several of the country's largest companies, as well as leading companies abroad. Drucker has since had a distinguished career as a teacher, first as Professor of Politics and Philosophy at Bennington College, then for more than twenty years as Professor of Management at the Graduate Business School of New York University. Since 1971 he has been Clarke Professor of Social Science at Claremont Graduate School in California. In addition to his management books, Peter Drucker is also renowned for his prophetic books analysing politics, economics and society. These books span fifty years of modern history beginning with The End of Economic Man (1939) and including The Practice of Management; Innovation and Entrepreneurship; Managing in the Next Society; Management Challenges in the 21st Century; The Effective Executive and The Essential Drucker.

What makes an effective executive?

For decades, Peter F. Drucker has been widely regarded as “the dean of this country’s business and management philosophers” (Wall Street Journal). In this concise and brilliant work, he looks to the most influential position in management—the executive.

The measure of the executive, Drucker reminds us, is the ability to “get the right things done.” This usually involves doing what other people have overlooked and avoiding what is unproductive. In an executive position, intelligence, imagination, and knowledge may all be wasted without the acquired habits of mind that mold them into results.

Ranging across the annals of business and government, Drucker demonstrates the distinctive skill of the executive and offers fresh insights into old and seemingly obvious business situations.