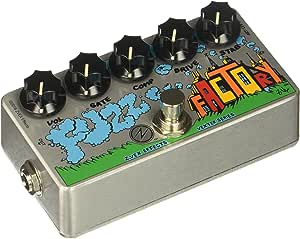 4.6 out of 5 stars
4.6 out of 5
56 global ratings
How are ratings calculated?
To calculate the overall star rating and percentage breakdown by star, we don’t use a simple average. Instead, our system considers things like how recent a review is and if the reviewer bought the item on Amazon. It also analyzes reviews to verify trustworthiness.

Parker P.
5.0 out of 5 stars Bought it on a whim with no expectations, very pleased with it overall.
Reviewed in the United States on May 3, 2017
Verified Purchase
Pros:
Very versatile fuzz, you can get many normal fuzz tones as well as extreme, experimental sounds out of this, so you definitely get a lot for your money. Made with high quality parts and assembled with care. Well packaged, and instruction manual is very useful. Takes up very little space. Sounds great.

Cons:
No dedicated EQ controls, but different settings will bring out highs, lows, and such. It would just be nice to change the EQ without having to make adjustments the also change the character of the setting you like. Pedal order matters, so wahs and buffers may not do so well placed before this pedal. The switch is very close to the knobs, so watch your step.

John Smith
4.0 out of 5 stars It's like an acid trip sweating out of your guitar
Reviewed in the United States on March 8, 2013
Verified Purchase
I love this thing. The berth of sounds and tones you can get out of it is incredible, from a more traditional 60's-tinged fuzz, to some of the most ridiculous noise-rock-ready squeals and white noise you can imagine.

It is initially a bit confusing when you first plug this sucker in because given the pedal's sensitivities, the knobs tend to have some really unexpected effects...which is at once exciting and a fairly frustrating. Exciting because you will randomly stumble upon some crazy sounds (I found a configuration yesterday that squeezes the sound into an almost classic-NES tone) and frustrating when you're simply trying to dial into a more specific, traditional tone.

Still though, you can't really beat this pedal if you're looking for some crazy fuzz sounds that you would never be able to get out of any other fuzz pedal. It really allows you to explore the full spectrum of the effect...and I mean the FULL spectrum.
Read more
11 people found this helpful
Helpful
Comment Report abuse

Erik Zenhausern
4.0 out of 5 stars Temperamental and Unique Fuzz
Reviewed in the United States on January 14, 2015
Verified Purchase
Fuzz has never really been my thing as I'm basically a rhythm player in the classic rock vein. I tend to like clean sounds and the sound of tube amps pushed to the edge of breakup, without going over the top. When I was a gigging musician, I aimed for a more transparent sound. I wanted good tone without effects being too noticeable. Back in the day, I would have had no use for something like the Fun Fuzz Factory in a gigging situation.

However, I was always intrigued by unusual sounds and could sometimes be found alone in the rehearsal space experimenting with some of the extreme settings on my effects or pushing the gain in my amp for some crazy distortion sounds. I had a DOD Analog Delay 680 that could do some wild oscillations. I would love playing with it even if it had no place in the music I was playing.

I've long given up gigging and now spend most of my time playing at home or jamming with friends. As such, I've started to experiment with sounds again, musical and otherwise, and was intrigued by the Fat Fuzz Factory after seeing some YouTube videos. I've never owned a true fuzz pedal like a Fuzz Face or Big Muff, so I may not be the best person to evaluate a fuzz box, so take what I say with a grain of salt.

The product itself seems to be well made and was presented in an interesting and somewhat unique way. The pedal came in a somewhat plain white cardboard box. Inside the unit was wrapped in a soft cloth (might make a good guitar shammy) tied together with what looks like a fancy scrunchy with some interesting cube doohickies on the end. Also included was a warranty card and brief instruction sheet, the same that can be found on the Z. Vex website. And I was pleasantly surprised to find that the pedal came with a battery already installed.

The pedal has a very solid feeling case and the screened paint job looks very professional while maintaining a boutique look. According to the Z. Vex website, the Vexter edition is the same construction as the regular edition but is cheaper because it's silk screened and not hand painted. I can't hear hand painting so I'm not sure why you would pay extra for this. However, I think there may be some differences in where, and possibly how, the pedal is constructed.

The instructions are somewhat vague and a little tongue in cheek (for those that are that kind) but did provide some example settings. When I first plugged it in though, all I got out of it was some crackles and pops and nothing that resembled music in any way. I fooled around with it for a few minutes and got what I thought was an almost usable sound, but not something I was particularly thrilled with. This was plugged into a small 10 watt tube amp. Thinking that maybe I had blown a tube or something else was wrong with my amp, I plugged it into a larger solid state amp. This produced some much more musical type sounds that actually sounded like guitar to some extent. I then tested my tube amp without the pedal board to see if the amp was broken. While I was happy to find that the amp seemed to be working OK, it was somewhat disconcerting to think that the pedal wasn't compatible with the amp I use most often.

I've read that germanium fuzz pedals can be sensitive to temperature changes. Given that I had just opened the UPS box, I thought I'd leave the pedal for a while and give it a chance to get acclimated. When I returned to my rig about an hour later, it did seem like the FFF was behaving better. That is certainly relative though, as this is really not like any other pedal I've used before. It seemed as if I could either get it to produce a rather generic distortion or those crazy sounds that made the amp seem like it was broken, but at least I got something I thought I could use.

As I played around with it I discovered some very interesting sounds, that while they might not fit with what I usually play, were certainly a lot of fun to experiment with. You have to be very careful with this pedal because each of the 5 knobs seem to affect the others significantly and in at least one case one knob can totally disable another. For example, if you dime the compression the drive has no effect. It seems like small variations in the knob position can also have big effects on the sound. On at least one occasion I found what I thought was a great sound, but had trouble duplicating it later. For what it's worth, you'll want to take notes on the settings if you want to have any chance of creating reproducible sounds. Then again, given that the external environment can affect the sound, good luck with that.

This pedal can be a lot of fun if you're looking for experimental sounds, Velcro type sounds, radio interference fuzz, and wildly oscillating tones and feedback that can be controlled from your guitar knobs or by riding the knobs on the pedal itself. While I've heard this pedal cop some Hendrix and Zep sounds, if that's really what you're looking for, you'd probably be better off with a more conventional fuzz box. If however, you are into creating unusual soundscapes or are looking for some inspiration for your shoegaze songwriting or other sonic experimentation this may be just what you need.

I gave the pedal 4 stars instead of 5 because I personally don't think this is a very useful tool for most music genres, but I do think it's well built and quite a lot of fun.

BTS
5.0 out of 5 stars Marching to the beat of your own Drummer El Grande!
Reviewed in the United States on September 14, 2020
Verified Purchase
Instructions were written by a player for a player or anybody with a creative and dynamic mind. Solid construction and artwork----and endless sound variations are available --- all depending on the decisions and subsequent set-points of the player.
Fun Fun Fun. The neighbors will be polarized in your favor or against
Live Hard Die Free and crank this while you have a heartbeat
Connected to a Mesa Boogie w 3 channels, its amazing
Read more
Helpful
Comment Report abuse

jackal
4.0 out of 5 stars Wild unit.
Reviewed in the United States on December 20, 2012
Verified Purchase
Great sounding unit, all the fuzz one could want. My only hang up is that it's a little hard to adjust as the knobs are interactive. But you are told that upfront in the product description. Very little noise compared to other fuzz boxes. I would use it in the studio and at home, only would use it live, it I have a lot of room on stage to insure not bumping the knobs in the middle of a song. Truly a unique effects box.
Read more
3 people found this helpful
Helpful
Comment Report abuse

Anthony
5.0 out of 5 stars Love this pedal.
Reviewed in the United States on August 13, 2020
Verified Purchase
So, if your looking to experiment with fuzz. This is your answer. I love this pedal. However, again it's a fuzz pedal so don't expect anything but raw fuzz soundscapes.
Read more
Helpful
Comment Report abuse
See all reviews