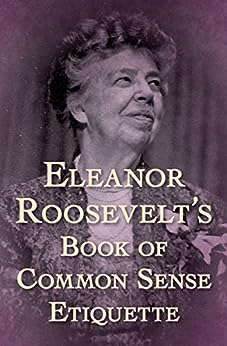 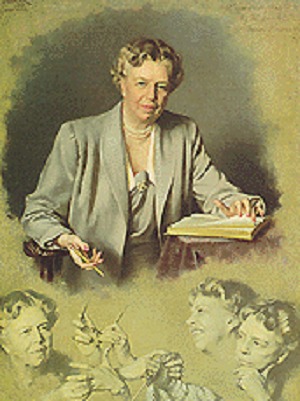 “Courtesy, kindness and consideration—these are the basic principles of etiquette, which after all is merely a matter of being comfortable in the company of others and making them comfortable in yours. Mrs. Roosevelt has shown a genius for this in all of her public life.” —Kirkus Reviews

Eleanor Roosevelt was born in New York City on October 11, 1884. The wife of President Franklin D. Roosevelt, she wasn’t satisfied with the traditional role of the first lady, and resolved to show the world the first lady’s importance in American politics by actively promoting human, civil, and women’s rights.

Following the death of her husband in 1945, Roosevelt went on to serve as delegate to the United Nations General Assembly, representative to the Commission on Human Rights under Harry S. Truman, and chairwoman of the Presidential Commission on the Status of Women under John F. Kennedy. In addition to her political work, Roosevelt is the author of multiple books on her life and experiences, including This Is My Story, On My Own, and The Moral Basis of Democracy. She died on November 7, 1962.

4.4 out of 5 stars
4.4 out of 5
43 global ratings
How are ratings calculated?
To calculate the overall star rating and percentage breakdown by star, we don’t use a simple average. Instead, our system considers things like how recent a review is and if the reviewer bought the item on Amazon. It also analyzes reviews to verify trustworthiness.
Top reviews

optimist22
4.0 out of 5 stars “But the basis of all good human behavior is kindness.”
Reviewed in the United States on June 3, 2019
Verified Purchase
“If ever you find yourself in a situation in which following a formal rule would be manifestly unkind, forget it and be kind instead.”

For some reason unknown to me, I have always liked reading etiquette books. I recently discovered Eleanor Roosevelt’s book on etiquette. I thoroughly enjoyed it. There was more than just etiquette in the book; she interspersed much of her own philosophy about patriotism, social mores, and contemporary behaviors throughout. However, you must remember that contemporary is the early 1960’s, the time she wrote the book. Much of what she says may not be relevant to the 21st century, but then again, if you substitute modern technology there is much that can be analogous. Certainly, we could use more common courtesy today. I did enjoy her section on telephone usage (think operators, party lines, disconnected calls). For a short time, I was a long distance telephone operator in my youth and it was fun to remember the old telephone system.

I enjoy Ms Roosevelt’s writing style and intend to read more of her books. This book is a pleasant read and well worth the time.
Read more
7 people found this helpful
Helpful
Report abuse

Sunnie Grant
5.0 out of 5 stars Etiquette is becoming a lost art
Reviewed in the United States on April 10, 2017
Verified Purchase
As I read through this book, I became acutely aware of what a terrible loss we have all suffered by not stressing to younger generations how civilized we were just a few generations ago. I am all for women breaking the glass ceiling, but I cringe when I see men rushing to the door and walking out before the woman. This book reminds us of the civilities that separate us from a bunch of uncouth, uncaring ruffians. Some of these techniques are a bit outdated, but they should still remind us that we have the ability to be gracious creatures. It makes me feel a bit guilty for not being more thorough in teaching my children, but that does not mean it is too late, or difficult, for future generations.
Read more
8 people found this helpful
Helpful
Report abuse

Allyson M. W. Dyar
3.0 out of 5 stars A Time that Has Passed
Reviewed in the United States on January 1, 2018
Verified Purchase
This review doesn’t really fit with the rest of my medical history book reviews, but I don’t know where else to put it.

Nothing Mrs Roosevelt wrote was earth-shaking and some of the advice could even stand today. Despite her recognition that women did toil in the workplace, there was still the stigma of single young ladies entertaining a man in her apartment alone. Scandalous!

Some parts of the book were more readable than others. Towards the end, I found myself skipping large portions because books like this aren’t really written to be read from cover to cover, but to be consulted for specific information.

I give the book 3 out of 5. If nothing else, it’s a glimpse of a time past and reminded me how much nicer living in this time is.
Read more
One person found this helpful
Helpful
Report abuse

Me
5.0 out of 5 stars Great lady author
Reviewed in the United States on June 1, 2021
Verified Purchase
A very great writer and a clue to how people are to behave
Read more
Helpful
Report abuse

Trudie F. Turner
5.0 out of 5 stars Want to know what to do? Read this book!
Reviewed in the United States on August 19, 2018
Verified Purchase
I love her writing!
Read more
2 people found this helpful
Helpful
Report abuse

Tags that will help you discover similar books. 3 tags
etiquette guides & adviceself-helpetiquette
Results for:
Page 1 of 1Start overPage 1 of 1
Previous page
Next page
Where do clickable book tags come from?
Book tags are created from a variety of sources, some of which are customer-generated. Amazon is not legally responsible for the accuracy of the tags represented. If you are an author or publisher and would like to remove a tag associated with your title, please contact your vendor manager or publisher support team.