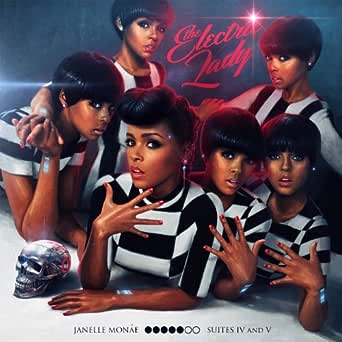 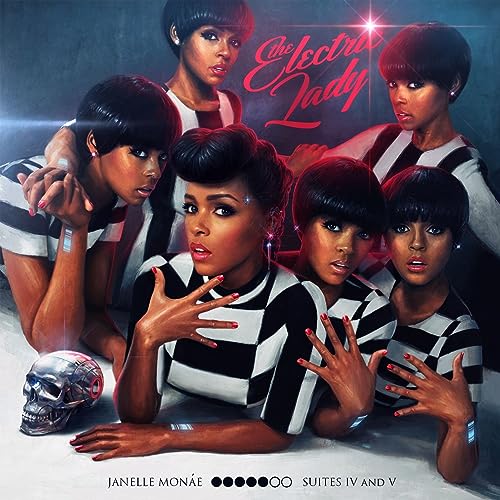 Janelle Monáe
September 9, 2013
4.7 out of 5 stars 125 ratings
See all 2 formats and editions Hide other formats and editions
Buy the CD album for $14.86 and get the MP3 version for FREE.&nbspCD album ships from and sold by Amazon.com. Terms and Conditions. Does not apply to gift orders. Complete your purchase of the CD album to save the MP3 version to your Music Library.

4.7 out of 5 stars
4.7 out of 5
125 global ratings
How are ratings calculated?
To calculate the overall star rating and percentage breakdown by star, we don’t use a simple average. Instead, our system considers things like how recent a review is and if the reviewer bought the item on Amazon. It also analyzes reviews to verify trustworthiness.
Top reviews

Ashton
5.0 out of 5 stars Eclectic and Futuristic R&B with a Lyrical Punch
Reviewed in the United States on September 10, 2013
Verified Purchase
Janelle Monáe is hands down one of the most exciting and creative artists currently putting out music, and this latest album is a worthy addition to her repertoire. Slightly more focused on R&B than her last album, "Electric Lady" constitutes the fourth and fifth suites (of a proposed seven) of Monáe's epic saga of the world of Metropolis--the futuristic dystopian world of androids as seen through the eyes of rebel android (and Monáe alter ego) Cindi Mayweather. "Electric Lady" balances a thoughtful and probing social conscience with an uncontrollable toe tapping/body throbbing good time.

The sci-fi fantastical world of Metropolis full of androids and zombies is just beyond our reality, which allows Monáe the freedom to tackle heavy topics like gender, race, religion and sexuality in a different context without things getting too ponderous and exhaustive. While clearly relevant and important, Monáe grounds these discussions with a playfulness which has her pairing questions like "Say will your God accept me in my black and white" in the same song as "...You gotta testify because the booty don't lie" (from "Q.U.E.E.N."). Aside from her infectious energy and fantastic vocals-much of Monáe's brilliance comes from her ability to raise and discuss these issues without it seeming forced, pretentious or angry. She's a feminist, civil rights activist, opinionated and yet still approachable, danceable and fun. Which means her message actually gets through instead of your brain just shutting it all out.

Musically, this album is a bit less eclectic than "ArchAndroid", but still manages to run the gauntlet of funk, r&b, classical, psychedelic punk and jazz. It also sees the appearance of several respected artists like mentor Prince on the funk "Givin' Em What They Love". Erykah Badu is a righteous soul sister on "Q.U.E.E.N." laying down a bridge that gives into Monae showing off some admirable rap skills. These features aren't always successful though as illustrated by the rather tepid duet with Miguel on "Primetime" which may or may not have been a half hearted attempt at a radio hit. My personal favorites are probably mostly in the first suite as it seems to have a bit more edge, yet it seems Monáe's vocal prowess is showed off a bit more in the second suite like on "Sally Ride."

Now as wonderful as this world of Metropolis is, and as skilled as Monáe is at using and manipulating this world--the explanations are still at times a little heavy handed and clunky. Her insistence on putting on this robotic persona at all times does wear out its welcome a little bit. And while at times incredibly thrilling and thought provoking, Monáe's many nods and "inspired bys" to a whole host of different things is also a reference too far sometimes. Far be it for me to tell an artist that they need less layered music--but sometimes you just wish you could see more of Monáe and her essence in her music.

That said, Monáe is an artist artist--willing and able to make art for herself before even thinking of an audience and I tremendously respect her fearsome commitment to her craft and her concept. In the meantime, I get to enjoy an album that somehow makes my body break out in violent spasms while driving--which I imagine on a more coordinated person would look at lot more like dancing. And as a cherry on top, I don't have to check my mind at the door either. Janelle Monáe is a musical maelstrom who is a shining beacon of individuality and class, not to mention an incredible vocalist--and it's a privilege experience her Metropolis. If we could all be as fearless and passionate as Cindi.

***Monáe is on tour right now and I cannot highly suggest going to a concert enough. I saw her a few years ago and was blown away. If you think she's high octane and energetic in her music videos-prepare for world domination during a live show.
Read more
62 people found this helpful
Helpful
Report abuse

Amazon Customer
5.0 out of 5 stars 57821 inviting you to hear another Wondaland Jam...
Reviewed in the United States on May 26, 2014
Verified Purchase
Janelle Monae is about honoring the past and updating it for today. You see it in the way she dresses. Her music is quite the same. To understand the theme of this album you have to understand the theme of her previous album, the ArchAndroid.

First, how does this album differ? The Electric Lady is not as experimental as the ArchAndroid, by which I mean Monae doesn't use as many genres as she had in ArchAndroid. (One minor exception is the Ennio Morricone inspired introduction.) For example you won't find any 60's folk rock music (like the Simon and Garfunkel inspired 57821) or psychedelic music (the Beatles inspired Mushroom and Roses). Nor will you find homages to classical music - specifically impressionistic music (found at the end of Say You'll Go, and segued into very well).

With The Electric Lady, what you do get is an album that is more focused on R&B and Funk. You hear the influences of Michael Jackson and Stevie Wonder, specifically their 70's style (Ghetto Woman, Dorothy Dandridge Eyes - which feels like the climax song that ArchAndroid's Say You'll Go). And you get alot of funk from many of the other songs - Q.U.E.E.N, Giving Them What they Want, Can't Live Without Your Love.

Once again, Deep Cotton and Roman GianArthur do an excellent job on instrumentation and production. I'll cite the guitar work at the end of Ghetto Woman as an example of the instrumentation being even better than ArchAndroid. I will say the one slight weakpoint of this album is that it follows the same format of ArchAndroid - the first half (Chapter IV) consisting of higher energy songs, and the second half (Chapter V) containing slower ballades. But that is a minor quibble.

Overall, I have to say that if you enjoyed the ArchAndroid then you will definitely enjoy this album.
Read more
One person found this helpful
Helpful
Report abuse

Angel Love
5.0 out of 5 stars Electric Lady
Reviewed in the United States on September 13, 2013
Verified Purchase
KICKING myself because I was too fast on the draw and paid $8.99 for the MP3 when I could have brought the CD for $9.99 and got the MP3 for free (at least that was Amazon's special last night). It's been a lllooooonnnngggg time since I wanted a CD just so I could read the liner notes... This one makes you wanna read the liner notes! Makes you wanna know who played what instrument on what song, and who sang this or that note. Janelle is a Bad Chick..... period. Been loving this girl since Metropolis..... Arch Android was my theme album.... I expected her to DELIVER ON THIS and she did not disappoint. Problem is.... I'm stuck on the 1st 3 duets and CANNOT stop heavily rotating those 3 to enjoy the rest of the album..... My hands down faves are #1) Janelle and Prince, #2)Janelle and Solange, and #3) Janelle and Badu..... I love Janelle and Badu FOR REAL.... thought they would be number 1 for me, but Prince claims EVERY ounce of his space with her.... they are soooooo good together! When you hear Janelle one minute you're hearing a young Michael Jackson, next song you're hearing Marvin, next song it's Sly and the Family Stone, next song she sounds like Lauren Hill, or Stevie Wonder, then she had the nerve to throw the Beatles in there..... and EVERY song she ALWAYS sounds like Jimi Hendrix, at the same time you always "hear" JANELLE! Love the Overture's....she goes from Trouble Man to The Price is Right with the Overture's....continuing on that Cindi Mayweather chase! Power Up is hilarious!!! This is the most creatively artistic lady on the scene today besides Badu.... she needs to be making Lady Gaga money but ignorance does not compute (did I just mention both of their names in the same sentence?... blech and double blech!!!!) Loving what she does with Rock and Roll (same thought pattern as Mike's "Remember the Time"), Ghetto Woman (I hear you Stevie Wonder) and Sally Ride and Dorothy Dandridge Eyes.... Janelle is a Bad Chick.... buy this.... now.... today!
Read more
18 people found this helpful
Helpful
Report abuse
See all reviews