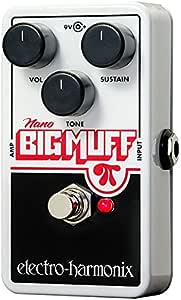 We took the Big Muff Pi circuit and simply shrunk it without changing its rich, creamy, violin-like sustain and sound. The Nano Big Muff Pi works and sounds identical in every way to our classic NYC Big Muff Pi. Get a piece of the pi for yourself!

We took the Big Muff Pi circuit and simply shrunk it without changing its rich, creamy, violin-like sustain and sound. The Nano Big Muff Pi works and sounds identical in every way to our classic NYC Big Muff Pi. Get a piece of the pi for yourself!

4.5 out of 5 stars
4.5 out of 5
262 global ratings
How are ratings calculated?
To calculate the overall star rating and percentage breakdown by star, we don’t use a simple average. Instead, our system considers things like how recent a review is and if the reviewer bought the item on Amazon. It also analyzes reviews to verify trustworthiness.

s
5.0 out of 5 stars This pedal is rock on solid
Reviewed in the United States on October 3, 2017
Verified Purchase
I now own four or five of these pedals by electro harmonix, each of them is better then any other pedal I've ever used. Hands down, this company consistently makes the best effects pedals I have never used.
Made in USA, they are clearly cost competitive to any maker out there.

Russell HendersonTop Contributor: Guitars
5.0 out of 5 stars Classic Big Muff Pi at a fraction of the size!
Reviewed in the United States on August 30, 2016
Verified Purchase
Amazing, the perfect Big Muff Pi sound in a tiny little package! I have an older BMPi from the 70's that just isn't up for trips out of the studio anymore, and takes up a lot of spaceon the old pedalboard....enter the Nano to save the day. This perfectly captures the classic sound of my older unit and has the convenient red indicator light, small size and clean sounding connections to make it even better. If you want that classic Floyd/Gilmour sound, this is the best way to get it on your pedalboard.
Read more
6 people found this helpful
Helpful
Comment Report abuse

SomeoneWhobuysStuffTop Contributor: Guitars
4.0 out of 5 stars Cool Fuzz Pedal
Reviewed in the United States on November 15, 2016
Verified Purchase
Good Fuzz pedal, decent price for a sturdy build. Sounds great stacked with some OD pedals to drive the preamp tube on your amps. Cuts through mix nicely. Mine arrived in a timely manner and was in perfect condition when delivered. Sturdy enough and kinda mid-sized if you will, in comparison with other pedals. It's not a mini pedal but isn't what I'd call a standard size pedal either. I like it a lot and have a lot of fun with it.
Read more
4 people found this helpful
Helpful
Comment Report abuse

Justin
4.0 out of 5 stars Meh distortion pedal, superb muff pedal
Reviewed in the United States on December 15, 2018
Verified Purchase
I had heard this could be used as an alternative to your typical distortion pedal. But its a one trick pony. It does the distinctive fuzz distortion really well, but sounds crappy for just about anything else. Its still worth it though, despite not being the versatile pedal I was led to believe it was, it gets that sweet muff tone. It really does sound incredible for some Nirvana and Pink Floyd stuff.
Read more
One person found this helpful
Helpful
Comment Report abuse

David Peters
5.0 out of 5 stars Passed with flying colors.
Reviewed in the United States on April 22, 2014
Verified Purchase
I don't know if the Nano Big Muff Pi sounds like its big brothers but that wasn't important to me. I wanted to know how well it stood on it's own merits. I tried it with different gain and tone settings and could get anything from a high-headroom clean boost with just a hint of break-up to over-the-top Hendrix fuzz. Carefully tweaked, it can even do a passable impersonation of a Boogie crunch sound. But I had a more demanding purpose in mind for the Nano Muff. I needed a very smooth, pure square wave that I could put in the FX loop of my EHX Q-Tron+ so that I could modulate the envelope filters for a synth-like sound. The Nano Muff performed beautifully. I have a "flutey" tone with no trace of break-up. Anything you could ask of a fuzz pedal, this little puppy can do, and it's tiny footprint allows me to tuck it into a tight little corner of my pedalboard. Finally, today's Electro-Harmonix pedals are built a LOT more rugged than their 70's counterparts. This is one of the best $70 purchases I've ever made.
Read more
8 people found this helpful
Helpful
Comment Report abuse

D. H. Myers
4.0 out of 5 stars Better for bass gutar
Reviewed in the United States on January 2, 2019
Verified Purchase
Used a Big Muff pi for years on bass, got my money out of it. Too big, too much space used. Even the Little Big Muff a bit much. Nano's perfect, still gets that Muff sound. Less bass in the sound of the three but I always use it with a dry signal. P.S. Will later get a Little Big Muff for guitar.
Read more
Helpful
Comment Report abuse

John Rogers
4.0 out of 5 stars I like this pedal quite a bit
Reviewed in the United States on September 10, 2015
Verified Purchase
I like this pedal quite a bit, and definitely get a lot of us out of it. Not so much a fuzz pedal though, more of a very high gain distortion. Fun pedal to use and can create some extremely over the top sounds, but not extremely useful for classic fuzz in the spirit of Hendrix or the Stones. I find it fits my needs better for a fuzzy distortion found on early Sabbath records and even The Misfits "Famous Monsters" tones. Still, for the price it's very usable and the smaller size is definitely pedal board friendly.
Read more
2 people found this helpful
Helpful
Comment Report abuse
See all reviews

Rick Brindle
5.0 out of 5 stars A good, solid, compact pedal
Reviewed in the United Kingdom on April 7, 2018
Verified Purchase
So this is advertised as a fuzz pedal, but I have to confess, after watching way too many fuzz/overdrive/distortion pedal shootouts on youtube, they all started sounding the same. So unless you're Tony Iommi, it may be that one is as good as another, and you just have to set it to the sound you want.
So why did I pick this? Well, already having a pitchfork, and being mightily impressed with it, electro harmonix was always on my list. The big muff has been around a long time, and it seemed to win in versatility reviews. But, I gotta say, I was also taking a chance. Until you plug it in, you could have got it all wrong.
Not so this time. It's a nice compact, sturdy pedal, the same size as a pitchfork. It's got a solid click on the pedal, and three simple controls. Volume, well, that does what it says on the tin, so does sustain, and actually, so does tone. Twiddle around and you'll get high pitched Satisfaction, you'll get doomy Sabbath (with a little help from the pitchfork). As with all things, set it to a sound you like, and shred away. There's good control as well. Many years ago I had a distortion pedal that just took over, loads of dirt and feedback. This one gives you much tighter handling, you've got the fuzz/overdrive/reverb/distortion, whatever you want to call it, but you're also in control.
It would have been nice if it came with a power supply, as did the pitchfork, but they're easy enough to get hold of.
Just for reference, I'm a novice player, just starting out with a Squier and practice amp. This pedal easily does what I want to do. By the time I'm playing onstage as Saxon's third guitarist, will it still work for me? I'd like to think so. Apparently White Stripes used this pedal, and it worked for them.

The Muff has a very distinct flavour sonically, it bridges the fuzz and distortion worlds really. Less fussy in your chain than a fuzz face but doesn't really clean up like one either.

Be warned if using it live, it shelves your upper mid frequencies (and therefore your cutting ability). Live in a fairly big band I use it sparingly and feed it extra mids through a Tubescreamer to account for this.

Good looking pedal taking up about two thirds the pedal board real estate it's slightly larger cousin (the Little Big Muff) does. Sound wise, they are very similar, reportedly having identical conponents. This sounds a tad brighter to me.
Read more
Report abuse

Rhys Harries
5.0 out of 5 stars Exactly what I expected.
Reviewed in the United Kingdom on March 13, 2014
Verified Purchase
This sounds like a full size Big Muff, only smaller. Perfectly adjustable, ranges from almost clean, to down right filthy.
The size of the pedal is perfect. It isn't too small which was what I worried about. It feels robust and doesn't feel as if it will break mid-gig or mid-tour. I therefore have no doubt that this will be the root of all of my fuzzy licks for years to come! Very good product, and I cannot recommend it enough!
Read more
5 people found this helpful
Report abuse

Daithi
4.0 out of 5 stars Great for what i needed
Reviewed in the United Kingdom on August 2, 2020
Verified Purchase
I was looking for a pedal between overdrive and fuzz to drive a tube amp into blues rock territory - Gary Moore/Free/Pink Floyd or near. I considered this, the Tumnus and Soul Food or alternatively an ep booster or Boss Ge7. The Big Muff has not disappointed in any respect and sits well on my board - having the smaller footprint is a bonus. I have it running off a Boss PSA in a chain of 8 pedals and no issues.
Read more
Report abuse