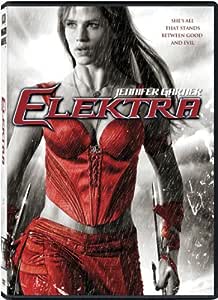 Share
STREAM ANYTIME with Prime Video from $3.99
Have one to sell?
Sell on Amazon

Following her death at the hands of Bullseye, Elektra Natchios, hired assassin skilled in the weapon of the sai, is brought back to life by the Order of the Hand, the ninja assassin group that first trained her. Given an order to kill a man and his teenage daughter, Elektra finds that a conscience is detrimental to life as an assassin.

While 2003's Daredevil was a conventional superhero movie, the 2005 spinoff, Elektra, is more of a wuxia-styled martial arts/fantasy flick. Elektra (Jennifer Garner) has returned to her life as a hired assassin, but she balks at an assignment to kill a single father (Goran Visnjic, ER) and his teenage daughter (Kirsten Prout). That makes her the target of the Hand, an organization of murderous ninjas, scheming corporate types, and a band of stylish supervillains seeking to eliminate Elektra and tip the balance of power in the ongoing battle of good vs. evil.

As the star of Alias, Garner has proven that she can kick butt with the best of them, and some of the visual effects are impressive, but the action sequences tend to be anticlimactic, and there's not much to the story. Fans will notice numerous references to Frank Miller's comic books, but there's very little resemblance to Miller's cold-blooded killer (Elektra with an agent? Elektra referring to herself as a "soccer mom"?).

Is Elektra better than Daredevil? Not really, even with the distinct advantage of having all Garner and no Ben Affleck. That could be the spinoff's greatest disappointment: after Spider-Man 2 raised the bar for comic-book movies, Elektra lowered it back to Daredevil's level. Directed by Rob Bowman (the X-Files movie), and featuring Terence Stamp as the mysterious mentor Stick, Will Yun Lee (Die Another Day) as the chief villain, and NFL-player-turned-mixed-martial-arts-champion Bob Sapp as the immovable Stone.

DVD features
Ben Affleck's much-rumored cameo is one of the deleted scenes on the Elektra DVD. It's a one-minute throwaway, and while he's supposedly appearing as Matt Murdock (who romanced Elektra in Daredevil), the barrage of celebrity gossip makes it impossible to see him as anything other than Jennifer Garner's real-life boyfriend. There's also a making-of featurette, which is mostly promotional hype other than a few interesting effects shots; four editing featurettes; and Jennifer Garner's videotaped message to ComicCon. --David Horiuchi

4.4 out of 5 stars
4.4 out of 5
1,716 global ratings
How are ratings calculated?
To calculate the overall star rating and percentage breakdown by star, we don’t use a simple average. Instead, our system considers things like how recent a review is and if the reviewer bought the item on Amazon. It also analyzes reviews to verify trustworthiness.

Eaker
3.0 out of 5 stars Meh Movie, A Word about the Digital Copy
Reviewed in the United States on January 14, 2019
Verified Purchase
Elektra, both the regular and director's cut version, is not a great movie. Jennifer Garner does her best to inject life and personality into a film that is both weird and strangely lifeless. The action, such that there is, does little to thrill. When your heroine literally fights white sheets you might have a problem. That being said, Garner is fantastic, the film has a strange charm to it, and it doesn't make her character merely eye candy.

WARNING: If you bought this thinking that you could get the director's cut digital copy you will not get it. This comes with the standard version of the film. I had to email, call, and speak with management before this was made right. So if you want the director's cut on digital and don't want to work your way up Fox's management then maybe just buy the digital version.

joel wing
TOP 500 REVIEWER
4.0 out of 5 stars Surprisingly good as Elektra battles differences between her mind and body
Reviewed in the United States on September 26, 2020
Verified Purchase
Marvel’s Elektra (Jennifer Garner) was first introduced in the Daredevil movie starring Ben Affleck which had to be one of the worst comic book movies ever made. That didn’t stop Elektra from getting her own movie. That turned out to be a good decision because it was far FAR better than that release. The film contained Stick (Terence Stamp) as Elektra’s teacher and The Hand, a ninja organization and one of the great criminal groups in the Marvel universe. The story is about the inner conflict within Elektra between her mind and body.

The highlight of the movie is Elektra facing off against The Hand. The action scenes are well done and they don’t do a hokey Hollywood version of the ninjas either.

Elektra seems largely to have been forgotten especially because it came in the wake of Daredevil but it really is a very good movie well worth seeing.

m hutchison
1.0 out of 5 stars Yet another movie about a woman who is so tough and so in charge
Reviewed in the United States on October 4, 2020
Verified Purchase
We all liked Ripley, we loved Alice, and Sarah Connor was no slouch. But can we please stop pretending that women run around like alpha males fighting crime and beating large violent men in hand to hand combat? At least have the decency to hire Rhonda Rousey to do it. She is believable, would probably limit the BS, and could only do 1 or two a year which would be about the right ratio for tough girls vs. tough guys.
Read more
12 people found this helpful
Helpful
Report abuse

Amazon Customer
5.0 out of 5 stars NICE TO SEE A WOMAN WHO IS BEAUTIFUL BUT NOT USED AS T&A FOR A MAN'S PLEASURE
Reviewed in the United States on October 16, 2020
Verified Purchase
LOVED THE MOVIE! I GREW UP IN THE 60'S. AND ALL I CAN REMEMBER ABOUT 70'S, 80'S AND EARLY 90'S WAS WOMEN WERE ONLY CAST AS DAMSELS IN DISTRESS, WHO ARE "SAVED" BY A MAN. THERE WAS USUALLY NAKED BOOBS AND ASS OF THE WOMAN. REALLY? LIKE IN DEATH WISH 1, WHERE THEY SHOW A NAKED WOMAN BEING BRUTALLY RAPED. AGAIN, TITILATION FOR MEN. AND WHAT ABOUT THE GUYS LIKE BRUCE WILLIS, SYLVESTOR STALONE, MEL GIBSON WHOSE ACTION MOVIES PORTRAY SUPER HEROES THAT CAN FIGHT THEIR ENEMIES BY DOING SUCH RIDICULOUS THINGS THAT ANY OTHER MAN COULD NOT REASONABLY DO- YEAH DONE BY THE STUNTMEN, THE REAL HEROES OF THESE STUPID UNREALISTIC MOVIES. ELEKTRA PORTAYS A BEAUTIFUL WOMAN WHO REALLY DOES ALOT OF HER FIGHTING. THAT STUPID MAN WHO SAID THAT HE HATED THE MOVIE BECAUSE "REAL" WOMEN CANNOT FIGHT MEN. WELL I BET JENNIFER GARNER COULD KICK YOUR ASS. AND AGAIN, THE REAL FIGHT WAS INSIDE ELEKTRA HERSELF- HINT-WHEN SHE SEES HERSELF AS A LITTLE GIRL WHO SAYS: "I AM NOT AFRAID ANYMORE TO THE OLDER ELEKTRA. IT IS NICE FOR WOMEN TO HAVE THEIR HEROES- LIKE JENNIFER GARNER. SHE IS AMAZING.
Read more
4 people found this helpful
Helpful
Report abuse

batpox
1.0 out of 5 stars Daredevil spawns an even worse movie... how is that possible?
Reviewed in the United States on September 30, 2020
Verified Purchase
Just when you think Marvel couldn't do something worse than Daredevil, this shows up. Good actors with really really bad dialog. The director does the "lull you almost to unconsciousness with countless flashbacks and then does something loud and startling" so many times that you begin to realize it must be on purpose; as even the director knows this is a lifeless plot that will put even the most energetic Marvel buff to sleep... which it did. I would ask someone to tell me how it ended, but that path was well worn and telegraphed in the first five minutes of the movie, so I'm pretty sure I know.
Read more
5 people found this helpful
Helpful
Report abuse

AltezasAmazonAddiction
1.0 out of 5 stars hated it!
Reviewed in the United States on October 8, 2020
Verified Purchase
ok, so, no i didn't hate it, because i can never hate a movie with martial arts.

but the fact that i mostly listened to it while doing something else means i definitely didn't like it much.

didn't like it at all.
just not a good movie.
some good acting, but the writing/story/plot was SEVERELY lacking. (maybe it's the 2nd or 3rd part of a trilogy or something and i missed the adventure because i didn't see the previous part(s)).

whatever. it's a good enough movie to somewhat watch, but mostly listen to.

1/2 star for the fight scenes, which, like the entire movie, weren't impressive.

rkl
4.0 out of 5 stars Decent movie, nice twists.
Reviewed in the United States on February 23, 2020
Verified Purchase
This was one of those movies far down on my watchlist that I figured I'd kill a slow evening with. Garner is absolutely gorgeous in this but her use of the sai is rather misleading -- most people fail to understand they were specially-made for her and end up believing it's normally a cutting weapon. Anyway, the plot twists were nice but somewhat predictable, and the casting stereotypes were typical of the period -- sorry, Hollywood, there's just no way to win that game. The director's cut pulls out the scene with Ben Affleck, who did a cameo for the movie as part of his agreement with the studios. Kudos to Affleck for keeping his promise but the director was quite right to pull it out; it does absolutely nothing for the plot, story, or character development.
Read more
2 people found this helpful
Helpful
Report abuse

KT
2.0 out of 5 stars Letdown
Reviewed in the United States on November 12, 2020
Verified Purchase
Sadly a let down. The story gives you very little to go on from the beginning, especially if you didnt watch the daredevil movie. Her random flash backs are the same scene over and over with almost nothing new each time. That alone screams filler content. The overall lack of background knowledge would leave anyone confused about who is on what side.

The action scenes were neat, except for the final boss fight where Elektra ends up fighting white sheets. Seriously? Come on, everyother bad guy had some unique power, except the dude balancing a coin on his finger, and this guy just plays with floating sheets, most of which do nothing.

I'm all for a strong woman character but this was not it.
Read more
Helpful
Report abuse
See all reviews

PANJIM
5.0 out of 5 stars Blu-ray has Extra's
Reviewed in the United Kingdom on June 20, 2020
Verified Purchase
Delivered on time , upgrade from Elektra DVD , the Blu-ray has a few more Extra's , happy bunny 😀👍
Read more
Report abuse

Dean Hedges
5.0 out of 5 stars Excellent
Reviewed in the United Kingdom on October 17, 2020
Verified Purchase
This is the best version of this film at the moment!!!
Read more
Report abuse