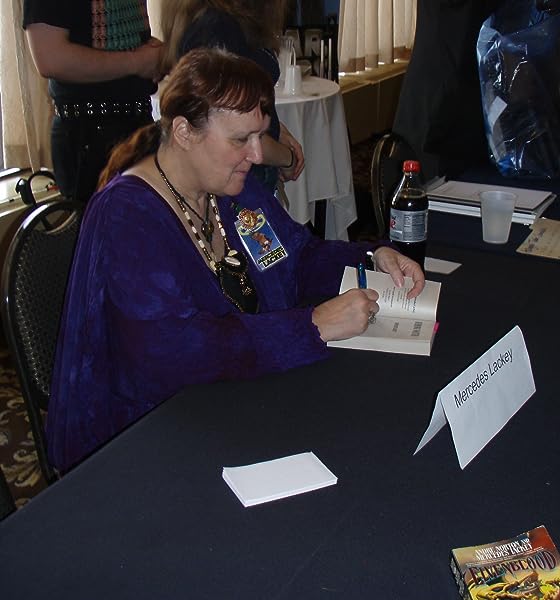 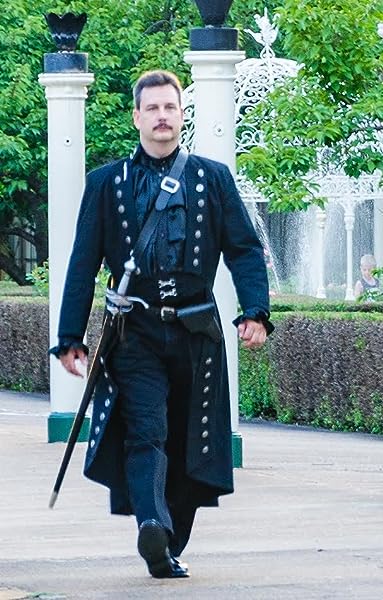 "This is Lackey at her best, mixing whimsy and magic with a fast-paced plot." — Publishers Weekly

"Fans of light fantasy will be thrilled by Lackey’s clever fairy-tale adventure." — Booklist

"Mercedes Lackey fans will thoroughly enjoy this fun escapade into turn-of-the-century England.... I find Ms. Lackey’s Elemental Masters series a true frolic into fantasy and Reserved for the Cat is no exception. Witty and dry, the magic in her books is always so believable, as are her characters." — Fantasy Book Spot

Mercedes Lackey is a full-time writer and has published numerous novels and works of short fiction, including the best-selling Heralds Of Valdemar series. She is also a professional lyricist and a licensed wild bird rehabilitator. She lives in Oklahoma with her husband, artist Larry Dixon, and their flock of parrots. She can be found at mercedeslackey.com.

4.2 out of 5 stars
4.2 out of 5
107 global ratings
How are ratings calculated?
To calculate the overall star rating and percentage breakdown by star, we don’t use a simple average. Instead, our system considers things like how recent a review is and if the reviewer bought the item on Amazon. It also analyzes reviews to verify trustworthiness.
Top reviews

Bonnie Forman
5.0 out of 5 stars Other authors playing in the sandbox...
Reviewed in the United States on August 20, 2020
Verified Purchase
Mercedes Lackey has published a number of books in her Elemental Masters series where humans able to interact with the magical creatures of the four elements. The initial books were loosely based on various fairy tales and seem to center/focus in Europe in the late 1800's through the first decades of the 1900's.

In this book, other authors are allowed to play. To write a story based in the world and with these magical people. From Wales and Paris and Napoleonic Spain. Halifax and Maine and post-Civil War Georgia. Colorado during the Wild West. A family leaving Greece to Italy during the time of Pythagoras (500 BCE). A Fire Master that may have caused the legend of Icarus' fall from the skies over Minoan Crete. Hawaii in the years before Cook's first visit and a much later story which has the heroine encounter the goddess Pele. London post-Waterloo.

All short and sweet stories. Some practically beg for further development as these tastes have only whet the proverbial appetite. Others are complete in themselves.

It is nearly always a fun experience to see how other writers view a popular series. And it looks like all contributors had fun.

This review is identical to the one posted on GoodReads.com

Arthur W Jordin
5.0 out of 5 stars The Elemental Universe
Reviewed in the United States on August 31, 2013
Verified Purchase
Elemental Magic (2012) is a Fantasy anthology in the Elemental Masters universe. It contains an introduction and fifteen original stories.

- "Introduction" by Mercedes Lackey tells of the delay of her annual Valdemar anthology because of this work. Somehow the next Valdemar anthology was announced on Amazon for 12/12/04. Hopefully it is already being put together for later release.

- "A Song of the Sea" by Diana L. Paxson features the parents of the first elemental philosopher.

- "The Fire Within Him" by Samuel Conway exposes the treachery of air elementals.

- "War to the Knife" by Rosemary Edghill sends an Englishman into Spain looking for a deadly mage.

- "Stones and Feathers" by Elizabeth A. Vaughan brings an English sergeant to the Tower of London.

- "Fire's Children" by Elizabeth Waters frustrates a boy who is the son and twin of Fire Mages.

- "For the Sake of Clarity" by Cedric Johnson gives a weak Earth Magician a push in the right direction.

- "To Ride the River Home" by Dayle A Dermatis discloses a plot against a young Water Mage.

- "The Phoenix of Mulberry Street" by Michele Lang reveals an arson conspiracy to a young Fire Mage reporter.

- "Air of Mystery" by Jody Lynn Nye leads a young perfumier into a plot by a golddigger.

- "A Flower Grows in Whitechapel" by Gail Sanders & Michael Z. Williamson foils an attempt to kill the King.

- "The Collector" by Ron Collins traps a disabled black Rough Rider veteran in a wicked situation.

- "Queen of the Mountain" by Kristen Schwengel divulges a scheme against a young Fire Mage.

- "I Have Heard the Mermaids Singing" by Mercedes Lackey relates some Water Mage problems in a Maine fishing town.

These tales have a wider scope than the author's Elemental Masters novels. The first one takes place in classical Greece, but none occur later than 1919 AD. Most occur in Britain or the USA, but several are located in Western Europe or Greece and two happen in Hawaii.

Highly recommended for Lackey fans and for anyone else who enjoys tales of elemental magic, evil sorcery, and a bit of romance. Read and enjoy!

Rover
4.0 out of 5 stars Varied, but good collection of tales
Reviewed in the United States on January 9, 2014
Verified Purchase
This anthology is a set of short magic stories set in the Lackey Elemental Masters world, with the two guiding boundaries of a focus on the Greek elements (plus spirit) and nothing more modern than 1919. Interestingly, while one character focuses on vengeance, none of the stories have the main character as the antagonist, the evil archanist, or the corrupted one. They all have heroes, heroines, and upstanding warriors for the good. Not that I'm complaining, mind you. It's a Misty Lackey book. That is what you get for your money.

To the negative, there was a fair amount of repetition in the "ignorant young woman/boy suddenly discovers her/his powers and saves the day" style of story. There were also two "you don't have to be evil!" confrontations, three "girl/boy with weak powers (who will never be a Master) is good enough after all," and enough giggling sylphs to make me check that they came from different authors.

To the positive, the stories did span a huge range of timelines and locations. For example, there were two very different stories set in Hawaii (one native - "Makana" - and one invasive - "Queen of the Mountain" ) and one totally different-tasting story sitting in the mountains of the Old West - "For the Sake of Clarity." I also appreciate that two of the stories set in the New World were not whitewashed. One of them had the very blatant lesson to not ignore the servant class ("Tha Thu Ann"), while the other one had a disabled black man for the hero of the tale ("The Collector"). The story about an altar boy figuring out his Element in "Fire's Children" was so comfortably formulaic that I could feel the ending sliding over me like a blanket, or perhaps like a true priest's blessing.

As is the Lackey style, some of the stories pulled from legends and fables we already know. "A Song of the Sea" invoked the deadly Sirens. "The Fire within Him" borrowed from Icarus. "To Ride the River-Horse" took the story of Rapunzel to Wales. Other stories borrowed the elemental friends, such as "The Phoenix of Mulberry Street", and gave them new incarnations. In general, the stories' conflicts were small, the tragedies personal or local, and the elemental escapades irrelevant to greater history. "War to the Knife" was a rare exception, set as Napoleon left Spain.

It may be to Lackey's editorial credit that none of the stories stood out as superb, and none of the stories stood out as abysmal, either. Elemental Magic was a uniformly good collection of enjoyable tales from various perspectives. There was just enough variety to keep me interested, and enough similarity to make this book an easy entry into the assumptions of how magic works in this universe.

I picked this book up because I really enjoyed some of the Lackey Elemental Masters series - namely The Fire Rose and The Serpents Shadow - and wanted to read other authors' takes on that world. I recommend this book to fans of the Elementals series, and for people who enjoy anthologies on such a theme. The magic is easy to understand in these stories, and this is a good light reading gift for anyone unfamiliar with the Elemental Masters world.
Read more
2 people found this helpful
Helpful
Comment Report abuse

Margaret A. Davis
4.0 out of 5 stars New authors invited to write Elemental Masters short fiction!
Reviewed in the United States on May 3, 2018
Verified Purchase
Overall, I think that the second Elemental Masters [Elementary] shared world anthology is the stronger. That said, I definitely enjoyed the first anthology Elemental Magic.

I especially enjoyed seeing Sarah and Nan again, even if they only had a cameo appearance in one story.

Elemental Masters combined with the fairy tale retellings and the Gifted/Talented paranormal powers are totally my cup of tea!

M. Dawson
2.0 out of 5 stars Elemental Magic: All-New Tales of the Elemental Masters
Reviewed in the United Kingdom on August 17, 2013
Verified Purchase
Once again Mercedes has hit the spot! An extremely good anthology. Enjoyed every story and am left wanting more!
Can recommend this to everyone who is into Elemental Masters stories.
Read more
Report abuse

Zahabi
4.0 out of 5 stars Various authors
Reviewed in the United Kingdom on March 17, 2013
Verified Purchase
A mixture of tales about elemental magic, varied and interesting. Some stories were unusual and most were enjoyable. Good start to a regular issue, one hopes.
Read more
One person found this helpful
Report abuse

N. Hannah
5.0 out of 5 stars Superb read
Reviewed in the United Kingdom on January 29, 2013
Verified Purchase
I really enjoy the Elemental Masters series, this did not disappoint. It is always interesting to see other author's takes on Mercedes Lackey's worlds. I look forward to more of the same!
Read more
One person found this helpful
Report abuse
See all reviews