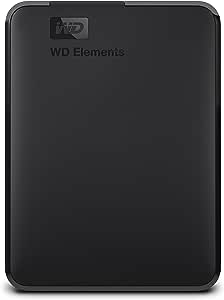 Visit the Western Digital Store
4.5 out of 5 stars 11,589 ratings
| 604 answered questions
Available from these sellers.

Quickly connect this portable drive to instantly add storage to your PC. WD Elements is an ideal companion for taking important files with you on the go.

Amazon.com Return Policy:You may return any new computer purchased from Amazon.com that is "dead on arrival," arrives in damaged condition, or is still in unopened boxes, for a full refund within 30 days of purchase. Amazon.com reserves the right to test "dead on arrival" returns and impose a customer fee equal to 15 percent of the product sales price if the customer misrepresents the condition of the product. Any returned computer that is damaged through customer misuse, is missing parts, or is in unsellable condition due to customer tampering will result in the customer being charged a higher restocking fee based on the condition of the product. Amazon.com will not accept returns of any desktop or notebook computer more than 30 days after you receive the shipment. New, used, and refurbished products purchased from Marketplace vendors are subject to the returns policy of the individual vendor.
Product Warranty: For warranty information about this product, please click here [PDF ]

Handle the product with care.

4.5 out of 5 stars
4.5 out of 5
11,589 global ratings
How are ratings calculated?
To calculate the overall star rating and percentage breakdown by star, we don’t use a simple average. Instead, our system considers things like how recent a review is and if the reviewer bought the item on Amazon. It also analyzes reviews to verify trustworthiness.

Eric Rose
5.0 out of 5 stars PS4 external drive for the win
Reviewed in the United States on March 1, 2017
Verified Purchase
I'm using this with my PS4 as I have the Beta 4.50 firmware that supports external USB for game storage. Games download to the external USB drive by default when that feature is enabled. The blue LED was bright but I turned the drive to face the wall. I like the black model, it fits with the PS4 perfectly. I haven't done any dramatic speed tests but games load from the drive with no issues. It is SO liberating to be able to just plug in a drive and triple your available space (I have a 1TB PS4 and the drive was full).
Read more
413 people found this helpful
Helpful
Report abuse

While it worked, it worked well. When it began failing, though, any software running on my laptop linked with data on the hard-drive would freeze and lock up the computer for a while.

Online software support from WD wasn't exactly easy to find and, once found, their proprietary diagnostic software failed to recognize their own product the first couple times. After a 15 hour scan of the device, it prompted me to repair certain bad sectors. Following that prompt though, I was then informed those bad sectors could not be repaired.

In every support article you'll read about addressing issues with external hard-drives, it invariably says to always back up your data. Well, this product is the backup; that's precisely what a 2TB external hard-drive is for, and a life span of half a year doesn't inspire much confidence.

I called the warranty support. For a ~$100 hold on a credit card, they will ship you a replacement product with instructions on then how to return your faulty drive. While they do provide a link to a discounted UPS label for return shipping, that cost is incurred by the customer.

I'm pleased they'll replace the product but I'm not very impressed by my initial purchase lasting 6 months or the fact the customer incurs return shipping costs.

This is a nice, compact drive that is lightweight, and can safely be "stacked" on top of a console or PC with no threat of crushing or leaving indents after long periods of sitting. It can easily become inconspicuous, and even in view it is not much of an eye sore. As a matter of fact, it's black coloring goes just fine - sitting on top of my XBox One(top left - DO NOT PLACE THE DRIVE ON THE TOP RIGHT OF THE CONSOLE WHERE THE VENTILATION IS).

XBox One owners who have reached their storage limits would appreciate this. It IS practically "PLUG & PLAY". Practically, because you must not plug the drive usb into the console until you have FIRST powered up your console. I plugged - then powered up the first attempt, and the XBox didn't even sense it. Power up the console(give it time to load your home screen), plug in the HD's usb(I plugged it in the "rear" of the console), go to "Settings", then "Storage". **NOTE: It slipped my memory, but either right after plug in, or immediately after choosing the WD drive for future memory(next step), it will ask if the drive's primary use is for "photos and media", whether you have current photos on the drive, and/or is it for your "game saves and downloads". Know that it is about to format the drive, so if you have photos saved prior to moving it to the XBox - keep this in mind...you could lose them.**

I provided pictures, but you will notice your consoles built in memory option at first, and the WD Hard Drive option should be showing to it's right. You may immediately notice something seemingly off...

You haven't been ripped off. Think of that unprovided(to you) ".2 TB" as the HDrive's functioning brain. The drive needs memory space of its own to be the think tank for services provided to you. A brainless drive is a dead drive.

Just click or choose to switch your memory(and future downloads) to the WD drive. Somewhere either right before or right after, it will ask your preferences on what kind of content you want saved. After formatting, IT'S SET. It showed "27.1%" memory used(for me), leaving that 1.8 TB. My explanation will take much longer to read than setting this up yourself. It's quite easy. I have since successfully re-downloaded games that I had to delete to make room for others, and I have also successfully downloaded new ones. We even had a recent power outage flicker - no harm to the drive. So far, so good, and at one of the most reasonable prices on Amazon in it's class.
Read more

Vinyl_Sounds_Better
5.0 out of 5 stars Works with a MacBook Pro
Reviewed in the United States on November 12, 2017
Verified Purchase
This review is for the 2TB Passport drive. I am using it with a MacBook Pro. I have two other Passport drives, but they are the 1TB model. With this one, I had to go through some extra steps to format it. I want to clear up any confusion over whether this drive works on a Mac. Out of the box, Disk Utility will not work to reformat the drive. You can format it, but you must do it through the Terminal app on the Mac, and not with Disk Utility.

I found the steps on Reddit. If you want to get them there, just Google "reddit disk utility fails to erase/format an external hdd." The first hit in your search results will be that page.

1. Open the Terminal app. You will need to copy and paste specific commands into the app, hitting return each time in order execute your commands.

3. This will show you the disks you have connected to your Mac. You want to get the name to the disk you're trying to format. The below commands assume this is "disk1", but replace "disk1" with the correct disk if it's something different.

This will format your disk to HFS+. If you want to reformat it to ExFat or something else, you can now do that with Disk Utility.
Read more
15 people found this helpful
Helpful
Report abuse
See all reviews

Amazon Customer
3.0 out of 5 stars Ok - cheap large capacity hard drive - 2 year review
Reviewed in the United Kingdom on February 3, 2017
Verified Purchase
Bought this portable hard drive in 2014 due to the large capacity and low price.
Physical the drive looks very plasticy and fragile. The connection between USB and enclose fells flimsy and loose. Worked well in the beginning although read/write got slower then the drive was halfway full.
A month ago during files transfering between computers the drive connect to a laptop did not show up. Checked the drive with included WD software - shows no errors although still does show up with files. I ran other softwares and found out that the drive got corrupted. Will try to recover as much as possible with file recovery program.
I would recommend this drive if you need a quick and cheap larger capacity hard drive with moderate read/write speeds although I would not rely on it or trust it with important unrecoverable data.
Read more
13 people found this helpful
Report abuse
See all reviews