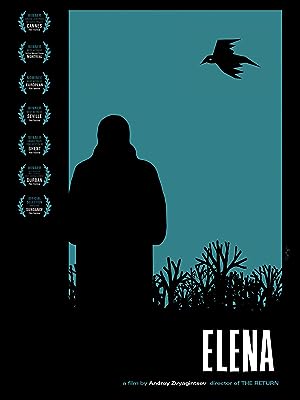 (131)
7.31 h 49 min201216+
When a sudden illness and an unexpected reunion threaten dutiful housewife Elena's potential inheritance, she must hatch a desperate plan ...

Although, I like the movie. I found that the film was very slow toward the end of the movie. The movie was a sad. I cried in some parts, but also laughed.

I feel that this movie could be a film from all ages, but I feel it is a little slow and sad for children. I do not think they will get the message that the movie portrays. The only way to have kids watch the film is to sit down with them and try to make it fun in a way. I expect the children would have lots of questions about the movie or complain about how slow it is. I would recommend this film to my friends.

The movie was about a love story between two older couples; Elena and Vladimir. Elena and Vladimir who are two older couples that were from two different backgrounds. The couple was very different. Elena was quiet and modest, while Vladimir came from a wealthy background and was a cold man. Both never got along. Both marriage before and each had one child. Elena had a son, named Sergey, who did not have a job and always asked for money. Vladimir had a daughter, named Katerina, who had a distant relationship with her father at the beginning of the movie. The mother wanted to help her son and to get her grandchildren a real chance in life. It seemed that everyone had was struggling.

The actors who are starring in "Elena" are;
Nadezhda Markina as Elena – The wife.
Andrey Smirnov as Vladimir – The husband.
Elena Lyadova as Katerina – Vladimir's Daughter from his previous marriage.
Aleksey Rozin as Sergey – Elena's Son from her first marriage.

The film had a good source of light, that added to the intensity of the movie. The light was dim throughout the film. Some parts of the movie were too dark.

I would rate the movie an 8 and The movie did not have any popular artists, but the songs were catchy.

The Cool DadReviewed in the United States on August 8, 2020
3.0 out of 5 stars
Sadly not so unordinary
Verified purchase
First, there are times when I miss Moscow and the sounds of the birds, the trains, and even footsteps on the streets brought to many memories to the forefront. In the USA I don't walk as much and seeing people on the streets and wooded paths is something that I miss. However, there is a sadness to this movie. Neither the daughter or Elena deserve an inheritance given how they decide to spend it. I am glad that the directors showed the less affluent apartments, former state housing, because in reality that is where and how most Russians live today. The Soviet past left little incentive for the common person to work hard and excel and so those who do often end up amassing some amazing wealth. Corruption is everywhere, at every level, and here we see it up close in just about every cast member except perhaps for the baby grandchild. Sad, but not so unordinary.

Frank RomanReviewed in the United States on March 3, 2019
3.0 out of 5 stars
Well done
Verified purchase
Realistic of Russia in modern times, the gaps that still exist and the incredible change and advance in the infrastructure are shown with a lot of tact, the performers did a great job and it shows Russia and Russians a non jovial people when out and about. I enjoyed the film all of it and what is clear for me is that people are what they are, trash is trash no matter what culture or where you put them, those who are meant to live in a hut if placed upon a throne or palace will destroy that palace or they will loose it in a short time, the film ends abruptly without much fanfare BUT it is clear where they are headed. Too bad she did not listen to her husband, he was the most intelligent and correct in his views of the entire lot.
2 people found this helpful

lillyReviewed in the United States on January 24, 2021
2.0 out of 5 stars
not suspenseful
Verified purchase
I spent the first few minutes of the film wondering if my screen froze but then I noticed a bird in a tree whose head was moving. The movie opens with a shot focused for what seemed to be an eternity on an apartment window. This set the pace for the rest of the movie slow and plodding. It doesn't take a genius to figure what was going to happen in this movie. The annoying part was it doesn't really have an ending. It was like the director said I'm tired of making this movie so he packed up his crew and equipment and went home. The reason I gave it two stars was that I enjoyed seeing what Moscow looks like these days.

Todd M.Reviewed in the United States on February 18, 2019
3.0 out of 5 stars
It was like watching grass grow… but it was OK.
Verified purchase
Whoever typed “suspense” after genre probably didn’t see the movie before doing so because it’s anything but that and it’s pretty clear from the beginning where it’s headed so there’s no surprises along the way. Be careful in what you deny your wife is the plot and it really unfolds in what seems to be real time. You literally see every moment from the time someone wakes up, does the morning duties, drives to the gym and does his workout so some editing would have been helpful. There is some good insight into Russian living and having a dysfunctional family that is not self-supportive knows no boundaries.
7 people found this helpful

Emma E. Emerson, NYCReviewed in the United States on January 29, 2021
5.0 out of 5 stars
5 Stars..
Verified purchase
The description was not accurate. Besides that, this movie is 5 Stars. Survival of the Fittest.

I do not think what the wife does is right, but it is only a movie.
See all reviews
Back to top
Get to Know Us
Make Money with Us
Amazon Payment Products
Let Us Help You
EnglishChoose a language for shopping. United StatesChoose a country/region for shopping.
© 1996-2022, Amazon.com, Inc. or its affiliates