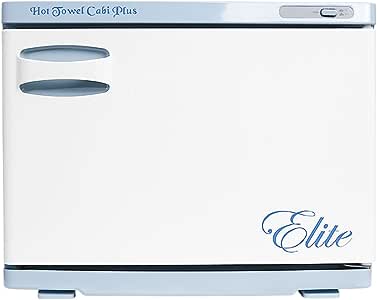 Add to Cart
$149.99
& FREE Shipping on eligible orders. Details
Sold by: SalonSmart
Add to Cart
$159.00
+ Free Shipping
Sold by: MassageTools
Have one to sell?
Sell on Amazon

by Elite
4.2 out of 5 stars 290 ratings
Amazon's Choice recommends highly rated and well-priced products.
Amazon's Choice for "hot towel cabinet"
Available at a lower price from other sellers that may not offer free Prime shipping.

This single hot-towel cabinet keeps towels warm all day long and can hold a maximum of 24 small, facial-sized towels. Maintains consistent temp of 150-160 degrees. Comes with water-drip pan and interior towel rack. For best results, use this hot-towel cabinet with small, facial-sized towels. Pre-soak the towels, wring them out, then roll them up and place towels on the wire rack inside the unit. When you turn the unit on, the towels will heat up. It is, along with our two other sizes (mini & double), among our most popular and top selling hot-towel cabinets. Excellent quality, very reliable and reasonably priced. Interior dimensions: 14 1/2" L x 7 1/2 " D x 9 3/4" H / .Exterior dimensions: 17 3/4" L x 10 1/2" D x 14" H.

Pre-soak the towels, wring them out, then roll them up and place towels on the wire rack inside the unit. When you turn the unit on, the towels will heat up.

4.2 out of 5 stars
4.2 out of 5
290 customer ratings
How does Amazon calculate star ratings?
Amazon calculates a product’s star ratings based on a machine learned model instead of a raw data average. The model takes into account factors including the age of a rating, whether the ratings are from verified purchasers, and factors that establish reviewer trustworthiness.

Annie MacKenzie
5.0 out of 5 stars Versatile warmer cabinet for towels, hot stones, Thai herbal or oils.
Reviewed in the United States on June 18, 2012
Verified Purchase
As a Massage therapist I am always applying heat to soft tissue with different modalities, hot stones, Thai herbal balls (Luk Prakob), or moist hot towels. This cabinet keeps all these items toasty hot. I love the cabinet, it's so simple and clean. I switch it on about 40 minutes before a massage session, I fill it up with either hot stones or hot towels, or both. During the massage session I can silently reach in to the cabinet and withdraw the items "quietly" without missing a beat. The door doesn't make any noise at all, whether opening it or closing it, the client is oblivious and can stay completely relaxed. I used to use the electric hot water heater bath for the hot stones and the lid would clang and disturb the client, the water temperature would get too hot for the stones or my hands or too cold for the stones if not constantly monitored, then there was the clean up afterwards.

For the hot Thai herbal (Balls) packs, I bought a small black "Presto" vegetable steamer with a glass lid, so you can see inside. it works really well for steaming 2 Herbal balls. A massage company on- line tried to charge me about $60 for it, calling it a "Thai herbal pack steamer", I found it at Walmart for under $30, sold as a vegetable steamer! Once the herbal balls heat up well, I pop them in the towel warmer and they retain the heat just fine. I also pop a small pyrex dish in there with my massage oil sometimes, for a short time, it warms it up beautifully. There's a constant steady heat that builds but never gets too hot or cools too quickly. Sometimes if my stones have been in there a while they actually do get quite hot, if so, I just quietly take them out and lay them on a towel to cool for a while before I need them.

I didn't bother getting the option with the Sanitizer light, the simpler the better for me. All my towels go straight into a hot wash in the machine, the stones are scrubbed and laid in the sun to be replenished. The sanitizer may be good for a professional salon that does facials.

After the sessions are over I simply press the external button on the cabinet once, the light goes out and it switches off. There's nothing to clean, just dab off the excess water in the tray below. The Cabinet heats up dry towels as well as moist towels. A great way to massage the Client's feet at the beginning of the massage and get them clean at the same time, or apply moist heat to the back or neck during the massage or even at the end. It's a small little cabinet but holds quite a lot, I really like it a lot.

Elizabeth P.
5.0 out of 5 stars This is a GREAT towel warmer. Be sure to use warm-hot water though, as with any.
Reviewed in the United States on January 6, 2015
Verified Purchase
I've been using this Hot Towel Cabi at my job with a mobil spa that does couples massage in local fancy hotels and inns. These inns have very small rooms, and we always have a lot of stuff to carry with us. This Cabi is big, yes, but it's not so heavy that it's unbearable, because simply, it's a necessity for wowing the clients with hot towels.

After using it with that independent contractor job, I bought it for my own business to sit in my studio. I LOVE IT!

There are a few different ways to use it to its best potential, but always I fold the cotton towels in 1/3s and roll them after soaking in water:

ONE:
If you like the slightly damp, but steaming hot towels, I suggest you drench the towels in HOT water, wring them out VERY WELL, then place them in the warmer (turned on, of course) at least 30 minutes prior to using (so I put them in the warmer about 10 minutes prior to my client arriving, then use them on the back about 30-35 minutes after starting the massage). You will have to pat the towels in your hand until they are less scalding for your client, but two or three (pizza-like) tosses does the trick. Be aware that this technique does leave that area of the client's body a bit damp, so just use a separate dry towel on top of the wet towel to wipe it off (putting the dry one on top traps the heat, then you can use it to also dry off simultaneously).

TWO:
If you don't want to leave the client a bit damp after the hot towel (even though it'll be warmer longer), you can place one folded (dry) towel down, drench a second towel in hot water on top, then roll them both and wring them both together, then place in warmer. The hot one will share the hot water with the dry one and once you're ready to use them, they will still be hot, but they won't be wet-hot. Just keep in mind that the heat won't last as long, since the heat is in the water, not the towel itself, so I prefer the former technique, but at least you have the option.

KEEP IN MIND: If you use cold water, or let the hot towels cool before putting them in the warmer, it will take MUCH longer to heat the towels. If you want to use them right away, it would be best to use HOT water.
Read more
65 people found this helpful
Helpful
Comment Report abuse

Wittbelle
4.0 out of 5 stars Great for warming bath towels!!!
Reviewed in the United States on September 11, 2019
Verified Purchase
I will update review as necessary, but so far, I am happy with this product. I bought it specifically to warm my bath towel for after my shower and it’s pure luxury! It can fit a bath sheet if you fold it in thirds lengthwise and then roll it. It comes out completely toasty just like I was hoping for. WAY better than our heated towel rack which only warmed the pieces of the towel that touched the rack before it quit working all together. If you live in a cold climate, having a warm towel is not so much an indulgence as a necessity. It really makes showering not nearly as dreadful. Also, this is great to warm pads for therapeutic purposes, for sore muscles, injuries, and the like. Will advise if it quits working as described.
Read more
3 people found this helpful
Helpful
Comment Report abuse

Cristina Phillips
1.0 out of 5 stars Dont buy this!
Reviewed in the United States on May 18, 2019
Verified Purchase
How does this even happen! I have been a massage therapist for 8 years. I always use a towel candy. So when I went out on my own I bought the same exact model as I always have had. It's been legitimately less then 3 months and today I opened it and the door fell off onto the floor with this piece that completely broke off. How does this even happen? I'm in a private office no one else has access to my stuff. I'm at a lost! Money wasted down the toilet. (Smh)
Read more

Amazon Customer
5.0 out of 5 stars Perfect addition for my reflexology business
Reviewed in Canada on September 27, 2019
Verified Purchase
I have had this warmer for 9 months and love it! It is perfect for my healing room and warms my hand towels within 10 minutes!
Read more
Helpful
Sending feedback...
Thank you for your feedback.
Sorry, we failed to record your vote. Please try again
Report abuse

Page 1 of 1 Start overPage 1 of 1
This shopping feature will continue to load items when the Enter key is pressed. In order to navigate out of this carousel please use your heading shortcut key to navigate to the next or previous heading.
Back
Next
Pages with related products. See and discover other items: metal steamer pans, roll out bed, 180 level, small bath cabinets, bathroom towel cabinet, bathroom towel cabinets