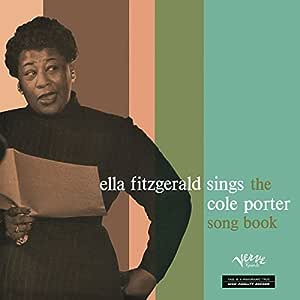 Save with Used - Very Good
$10.46
FREE Shipping on orders over $25.00 shipped by Amazon.
Arrives: Tuesday, Feb 2
Ships from: Amazon
Sold by: SecondSpinDisk

Ella Fitzgerald Louis Armstrong Format: Audio CD
4.8 out of 5 stars 268 ratings
See all 13 formats and editions Hide other formats and editions
Includes FREE MP3 version of this album.&nbspProvided by Amazon Digital Services LLC. Terms and Conditions. Does not apply to gift orders.&nbspComplete your purchase to save the MP3 version to your music library.
Available at a lower price from other sellers that may not offer free Prime shipping.

Long considered a jewel in Verve Records' very impressive crown, Fitzgerald's songbook collections of various composers--a series that was started by the success of this set--are all wonderful, but her natural wit and intelligence was at its most perfect with Cole Porter's erudite, urbane songs. While not as scat-oriented as her small group outings, these Porter sets offer her most realized pop performances. Also, the gold remastering does a fine job of bringing out the nuances in the arrangements, making this a treasure for the serious collector and the casual listener alike. A true American music gem. --Skip Heller

4.8 out of 5 stars
4.8 out of 5
268 global ratings
How are ratings calculated?
To calculate the overall star rating and percentage breakdown by star, we don’t use a simple average. Instead, our system considers things like how recent a review is and if the reviewer bought the item on Amazon. It also analyzes reviews to verify trustworthiness.
Top reviews

Lonya53
5.0 out of 5 stars Exquisite Ella . . . Perfect Porter
Reviewed in the United States on March 1, 2009
Verified Purchase
In any rational list of the 20th-century's top song-stylists, Ella Fitzgerald would have to rank in the Top 5. Ella had a wonderful, distinct voice and style. Many singers have great skills. Many have perfect pitch and great intonation. But very few singers can use their voice like a fine instrument. Ella was one of those select few.

Apart from having a wonderful voice, Ella was next to incomparable when it came to interpreting lyrics. It is no wonder that lyricists loved her and were ecstatic when she covered one of their songs. It is also no wonder that during the course of her career Ella recorded various "Song Books" in which she took the work of a great composer/lyricist and dedicated an album or two to their work. Ella did Irving Berlin, Harold Arlen, Rodgers & Hart, the Gershwins', and Jerome Kern song books among others. They are all wonderful to listen to, all 5-star performances (with the possible exception of the Gershwin song book) but my favorite of all her song books is this one: "Ella Fitzgerald Sings the Cole Porter Song Book".

Although the first half of the 20th century had a surplus of great songwriters (see the above) there was something about Cole Porter's work that has kept his lyrics fresh and even edgy in the 21st-century. The pairing of Fitzgerald and Porter then is the equivalent of the perfect storm: A lyricist whose lyrics are funny, witty, charming and, yes, poetic; and a singer capable of doing justice to those great lyrics makes for a memorable CD.

This is a 2-CD set. It contains an awful lot of Porter's great songs. Anything Goes, Too Darn Hot, Let's Do it, and I'm Always True to You in My Fashion are my highlights for CD-1. Night and Day, I've Got You Under My Skin, Love for Sale, and You're the Top, top off CD-2. Ella recorded these in 1956 under the auspices of the wonderful producer Norman Granz. Verve Records has restored the masters and the sound quality is excellent for a re-mastered recording.

Cole Porter once said that "In olden days a glimpse of stockings, was looked on as something shocking, Now heaven knows, anything goes." Well, all these decades later these songs go great with anything. You can enjoy them "in the still of the night" or "all through the night". These songs "do something to me" and I can say nothing more than this CD is the tops, it's the Tower of Pisa, it's the smile on the Mona Lisa.

If you can find this available, do yourself a favor and buy it, then sit back and enjoy.

Marguerite
1.0 out of 5 stars Buyer beware
Reviewed in the United States on July 15, 2020
Verified Purchase
I couldn't play it on my CD player because it was made for the European market, and their players are different
No refund, they offered to replace it, but why would I want another one that I can't play?
No refund.
Read more
Helpful
Report abuse

John L. Presley
4.0 out of 5 stars and like always.
Reviewed in the United States on October 13, 2017
Verified Purchase
It's Ella, so of course she deserves 5 stars (the album is fantastic) HOWEVER, when I received this brand new album, it had a large gash in one of the albums. I contacted Amazon about it, and like always..they were more than happy to send a replacement. I got my replacement album...same thing: Large gash in the same place and it does cause a loud POP and causes it to skip. It is apparently a defect going on in the factory. I didn't even bother to mail this one back...I just skip over 2 songs.
Read more
2 people found this helpful
Helpful
Report abuse

Ann E. Fox
2.0 out of 5 stars Too Many Strings; Not Enough Swing
Reviewed in the United States on December 21, 2020
Verified Purchase
This was recommended as an introduction to Ella; it's a little EZ Listening for my tastes. ymmv.
Read more
Helpful
Report abuse

Merl Sorensen
5.0 out of 5 stars Only One Ella
Reviewed in the United States on November 18, 2020
Verified Purchase
Headline saus it all
Read more
Helpful
Report abuse

Dennis N.
5.0 out of 5 stars Great recording!
Reviewed in the United States on June 6, 2020
Verified Purchase
The albums are wonderful, recordings are beautiful! My only disappointment was that the album collection was shipped in a flimsy plastic envelope and arrived with one of the corners of the album cover bent up--luckily the albums were not affected.
Read more
Helpful
Report abuse
See all reviews

Thespionic
4.0 out of 5 stars Just a Thought!
Reviewed in the United Kingdom on April 25, 2015
Verified Purchase
Ella will go down in history as one of the very best female singers.
There are more than enough Ella fans on here giving her due praise – I have nothing to add to that – it has all been said!
There is just one downside with this album IMHO, in getting one artiste to sing so many songs from the same composer. Some are classics of course, but many are not? Even allowing for a top artiste and fantastic band / orchestra, it is asking a lot to hit the mark with the listener again and again, over what is a very lengthy 35 songs?
Her voice is as smooth as silk and legendarily crystal clear, like a Rolls Royce if you like, but it’s not an exciting voice and tends to stay at one obliging level most of the time and seldom reaches the higher notes or exciting crescendos. It is rather like an expensive time piece, accurate, on time and seldom lets you down. I do not find her singing exciting on this album. The likes of Etta James would seem to me a far more expansive, evocative and an exciting voice to listen to – just my opinion, no more that!
I also bought Ella singing Gershwin and had the same thoughts.
Back to the album and 35 songs? My problem was maintaining an interest, as over the piece, one song morphed into another, eventually sounding so similar that I lost interest, even the orchestration started to sound the same – as I suppose it would, but the two together, failed to lift my senses and eventually became no more than pleasant background music.
I am therefore coming to my main point. To sing the songs of a great composer like Cole Porter, I believe it is more enjoyable to have a ‘compilation’ of singers and backing bands – it gives the songs more verve, variety and interest, without distracting from the music of the composer in question.
For instance, Michael Buble does a great version of ‘Begin the Beguine?’ Manhattan Transfer’s version of ‘Love for Sale’ can’t be matched? ‘I’ve Got You under My Skin,’ by Frank Sinatra is as good as anyone’s, and there are other Cole Porter songs that he sings that I could say exactly the same about?
Sammy Davis’s ‘Too Darn Hot’ takes some beating, Bet Midler’s version of ‘ Miss Ottis Regrets’ is superb and so full of life?
Natalie Cole’s ‘Every time we say Goodbye’ is every bit as good as Ella’s version on here? Even Charlie Parker’s ‘I love Paris,’ as an instrumental, is worth considering for some variety, not to mention 'Deano's' version of course? Finally, 'Night and Day' by the Temptations is such a stunningly beautiful version?
I think you get my point, though I accept that most of you ‘Ella’ fans will never agree to such sacrilege! Don't misunderstand me here, I have given this album a lot of air time and thoroughly enjoyed it.
Read more
4 people found this helpful
Report abuse

trottman
5.0 out of 5 stars Absolutely top of the list
Reviewed in the United Kingdom on June 1, 2013
Verified Purchase
I have been a jazz fan for nearly sixty years and Ella Fitzgerald features prominently in a very large collection but even by this lady's exalted standards this two CD set is as near to perfection as a collection of songs can get. In the middle 1950s the singer was at the pinnacle of her form and her voice comes across as absolutely right for Cole Porter. Many of the songs are established favourites but there is something totally fresh and original in each delivery. The set benefits greatly by the presence of the Buddy Bregman Orchestra which provides first class support.

Definitely one to take to the desert island.

paul michael
5.0 out of 5 stars One of the best collections of songs ever. Ever.
Reviewed in the United Kingdom on October 27, 2015
Verified Purchase
Perhaps the best of the songbooks series. Why ? Perhaps it's the combination of the sheer quality of the songwriting, the underrated arrangements, the effortless and definitive singing of Ella at the top of her game. Highlights for me include, MissOtis Regrets, Why Can't You Behave ? Lets do it...I could go on but I would rather be listening to it...ignore at your peril.
Read more
One person found this helpful
Report abuse
See all reviews