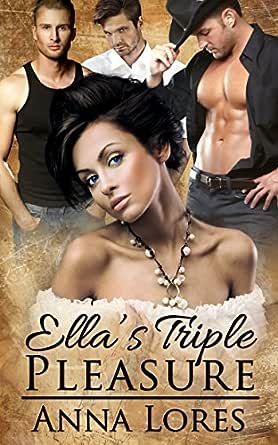 You've subscribed to Sinfully Hers! We will preorder your items within 24 hours of when they become available. When new books are released, we'll charge your default payment method for the lowest price available during the pre-order period.
Update your device or payment method, cancel individual pre-orders or your subscription at
Your Memberships & Subscriptions
There was an error. We were unable to process your subscription due to an error. Please refresh and try again. 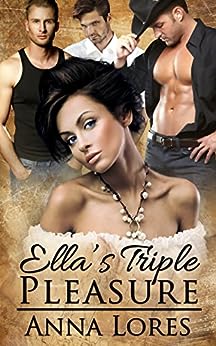 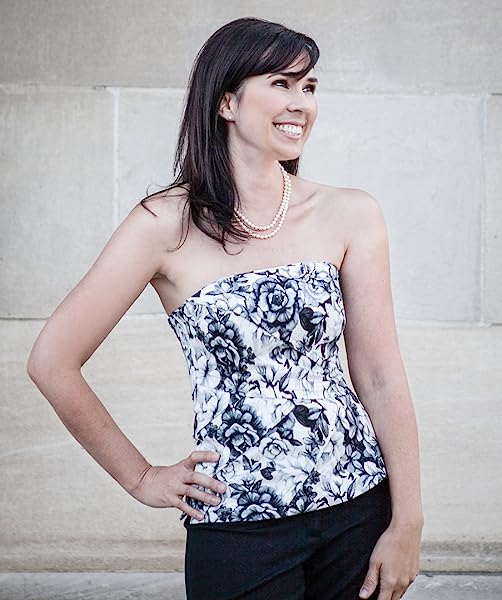 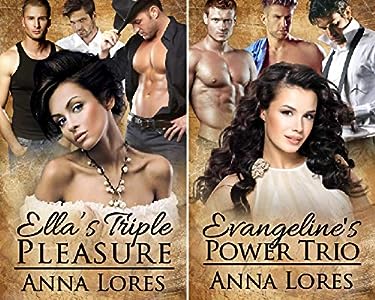 "This book is a sizzling, mind-blowing romance with not one, not two, but three men." -- I Heart Reading

Anna Lores started writing romance as a by-product of insomnia. After a year of late night reading, she borrowed her son's laptop and set about breathing life into her very own characters. A month later, Anna was surprised with a new laptop to pursue her dreams.

With a B.A. in English Literature and a desire to fill her world with wonderful stories of sizzling hot men she and her close friends could not just talk about, but gush over, Anna shed her job as mom of three in the midnight hours and began a storytelling journey into the publishing world.

Mack Powers
5.0 out of 5 stars Well written spicy romance
Reviewed in the United States on July 13, 2017
Verified Purchase
Anna Lores feeds readers page-turning addition with Ella's Triple Pleasure. She creates, wonderfully complex characters and then invites you to join them through her lavishly descriptive scenes. She describes her writing as "Spicy Romance," but in this novel the spice is ghost pepper hot. Ella is someone to whom everyone can relate. In the midst of the storms of her life, she has rescuers appearing out of the fog. Each has benefits to offer, but each have detriments as well. How can she choose. You must read this spicy romance, by this up and coming writer.
Read more
One person found this helpful
Helpful
Comment Report abuse

RockyBallad
5.0 out of 5 stars Wow!
Reviewed in the United States on June 15, 2017
Verified Purchase
This book was full of surprises! Just when I thought I knew how it was going to progress, it took a turn in a different direction! Loved it!
Read more
One person found this helpful
Helpful
Comment Report abuse

tina
4.0 out of 5 stars Hot
Reviewed in the United States on June 5, 2017
Verified Purchase
All I can say is HOT, HOT, HOT!!!
Read more
One person found this helpful
Helpful
Comment Report abuse

valeen
TOP 1000 REVIEWERVINE VOICE
2.0 out of 5 stars wasn't executed well
Reviewed in the United States on August 18, 2017
First off I have to say there will be one SPOILER in my review. I was really excited to read Ella's Triple Pleasure. One woman trying to figure out a way to have a relationship with three different men sounded like an out of the box, sexy premise. Unfortunately, it wasn't executed well. Ella is a widow with three teenage children. 2 are 17-year-old twin boys with genius IQs. The other is a 19-year-old young woman in her freshman year of college. Ella's been left in dire financial straits, as any money she and her husband had went to paying off his medical bills, and the rest was conned out of him in his last, paranoid days by his sleazy parents. So now she's working hard at her spa/masseuse center to raise money to fund her daughter's college tuition and her sons' upcoming college tuition. Sounds like a good story, right?

Unfortunately, Anna Lores just throws 3 men at the reader and expects us to know who they are and why they're important to Ella. I felt as if I were missing something really important when Cade, then Garrett, then Derek were introduced. I figured out that they were important, but I wasn't told why. Barely any details on Ella's past connections to them. It's as if this were an established weekly TV series that's about halfway through the season, and everyone who watches knows what's going on. Then in I come and am trying to figure out what the heck, who the heck, WTF, is going on. That is the feeling I had throughout this entire story. Not a good feeling.

As for the characters, I really ended up liking Cade and his dad, and that's about it. Ella was a mess, a b****y mess, her sons were mildly entertaining, but obnoxious as 17-year-olds tend to be, especially Jason, her daughter was a spoiled, shallow little princess, Garrett was just weird and presumptuous and Derek was...well, quite frankly, kind of unnecessary. I didn't connect with any of them except Cade, and even with Cade, I didn't love him or anything. As hot as the sex scenes were, and they were definitely HOT, I never felt the love between them, didn't believe in it, didn't feel it was strong or even love at all. About the only love I believed was the love between Cade and his dad, and the love Ella had for her children and her dead husband. *SPOILER ALERT* Not sure how she could have loved him, considering he tricked her, literally tricked her, into marrying him.

Then you throw in some random drama with a psycho stalker, add in Ella's husband's bizarre behavior during his final days, that I think was supposed to give Ella's Triple Pleasure either some edge or just make it even more dramatic. I'm not sure why any of it was included because it didn't add anything positive or necessary to this at all. Weird, random plot points like this drive me crazy!

phil price
5.0 out of 5 stars Scorcio
Reviewed in the United States on May 31, 2019
First off, this is not my usual genre but I'd read another one of the authors books and thought I'd try another. I'm glad I did. The story revolves around Ella, a thirty-something single mother who is struggling to keep her head above water. Along comes Cade, the perfect man in every sense. He's just what she needs. Or is he? Things become more complex as other suitors appear, all vying for position. Literally! You'll have to read the book yourself to see how it unfolds. The erotic scenes are many and varied, which made my eyes water and my head spin, such was the author's skill at portraying every moment in exquisite detail. Nothing is left to the imagination. And I mean nothing. A thoroughly entertaining book that kept me hooked from the first few pages. Hot stuff indeed!
Read more
Helpful
Comment Report abuse

Majanka
4.0 out of 5 stars Sizzling, mind-blowing romance
Reviewed in the United States on June 4, 2017
Ella’s Triple Pleasure is the first book I’ve read that feature one woman and three men! I’ve read plenty of menages, but three men, how does Ella find time to do just about anything else, was my first thought. I was curious to start reading the book, and I wasn’t dissapointed.

Ella is a single mom and a massage therapist. She isn’t looking ofr a relationship, but rather, the relationships, or in any case, the men, seems to find her!

There’s steamy businessman Cade Jackson, who has a dominant personab ut is also a client, and Ella refuses to date a client even though she’s insanely attracted to him. The second eligible bachelor is Garrett Winthrop, who moves back to town and opens old wounds Ella thought had long since healed. Bachelor number three is Dr. Derek McGregor. My favorite of the three was Cade, but each man brings something new to the table, and they all challenged Ella’s beliefs about love and relationships.

Kindle Customer
5.0 out of 5 stars I didn't want it to end
Reviewed in the United Kingdom on April 11, 2018
Verified Purchase
I have never read a book before where I found myself reading more and more slowly as the book drew to a close. I first for me in more than 1 ways. Wondered how it would work but somehow it did. An absolutely thoroughly good read. Thank you!
ps: I am sure that you could squeeze out at least 1 more story with these lead characters. ... does Derek get his heart's desire?
Read more
Report abuse

Rosie
3.0 out of 5 stars "Ick" factor
Reviewed in Australia on April 6, 2018
Verified Purchase
Some spoilers in this review.
I had expected a menage story by the title and its the spicy promise that got me reading it. The story kinda confused me, though, because I was reading a couples story about the developing relationship between Ella and Cade. Ella is a stressed out widow struggling with three adolescents and crippling debt. Cade is an appealing man. A wealthy, handsome guy who is a regular therapeutic massage client who has had a hard on for Ella for years.
Suddenly there are these two other men in the picture who change the back story and because of their creepy and controlling behaviour, are hard to like. Garrett having sex with a very intoxicated Ella and Derek filming it is just "ick".
Some poor character development means that people's reactions to various happenings are unpredictable and silly.Parts of the plot are never explained leaving you thinking "Huh?"
Read more
One person found this helpful
Report abuse

Kat 🇨🇦
5.0 out of 5 stars Great story with interesting characters
Reviewed in Canada on July 15, 2018
Verified Purchase
Great story, I really enjoyed all the characters so much so I’d love a sequel to this book, or an interesting spin off with some of the lesser characters like Ella‘s twin boys. I would have liked more a back ground story on Cade, Garrett and Derek but the story was still good without it. All in, I found it a very enjoyable read.
Read more
Report abuse

MaryAnn R
5.0 out of 5 stars Loved it a lot
Reviewed in Canada on June 8, 2018
Verified Purchase
Loved it
Read more
Report abuse
See all reviews