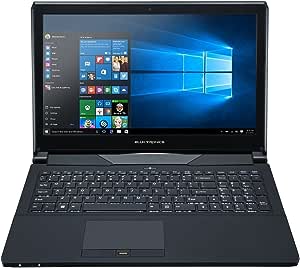 Brand: Eluktronics
4.7 out of 5 stars 7 ratings
| 8 answered questions
Currently unavailable.
We don't know when or if this item will be back in stock.

The Eluktro Pro N151RD1 is a high performance gaming PC by Eluktronics featuring premium options as standard features. An IPS full HD display offers a pristine picture with vibrant colors and rich deep blacks. Compare design, components, even available ports and you'll find this outmatches all competition for the price. Eluktronics prides themselves on offering a quality PC with fast and clear USA based customer support. Let's change the game, literally!

Amazon Customer
5.0 out of 5 stars Legit review from a 23 year old. Music making. Had a Mac. I like this.
Reviewed in the United States on January 7, 2017
Verified Purchase
I honest to god am a normal person I didn't get pressured in any way to write this. I just want to let htat be known because I looked up reviews for laptops for like a month straight until I decided on this one, and I couldn't tell if Eluktronics had rigged the reviews or what. Specs were pretty much what I wanted, and the price for the specs seemed unbeatable. Sounded kinda fishy. But reviews for the company everywhere indicated that although it's a smallish company, people just seemed to love their computers.

I got the computer to use for music production. The NVIDIA G whatever chip I could care less about in this computer. I wanted a good processer, and decently high RAM and SSD. I would've gone for an SSD HD combo but I figure I can put in a HD or get an external one if I need. That's another good thing about this computer, you can upgrade it's components pretty easily, they leave you space to expand.

The computer is lighter than I was expecting, because big gaming-style computers tend to be a little too heavy. While it's a good sized laptop at 15", it's not too big to take around the house and hold with one hand. I'm not an expert on keyboards or touch pads but I really like the keyboard feel. the touchpad is alright and I like the clicker buttons below the touch pad.

It's running well, I've installed Mixcraft and it ran excellently. I will probably try out FL Studio on it soon.

Also an interesting tidbit is that I was a Mac guy. I really do like Mac's operating system. I just didn't want to pay Mac price and not even get this good of specs. Everything about Microsoft's Windows just feels old. The loading icon and loading bar look like they haven't changed since like 1995. Which is a long time in technology terms. the mac's touchpad was better responsively, and its finger motions were better too. However I like having a full keyboard on the Eluctronics, and all the ports and dvd drive. this computer looks pretty standard, which I like about it. not flashy not trendy, just standard.

Very happy so far. If I don't update this I either forgot to or I have had no problems with the computer.

B.Carlton
5.0 out of 5 stars Great performance per dollar
Reviewed in the United States on December 11, 2016
Verified Purchase
This laptop is everything I need it to be and more. I use it mainly for data analysis in R, and it can handle huge 1M row datasets with ease. Furthermore, I do some light gaming, and, while the games I play don't push the envelop as far as graphical/computational requirements are concerned, I've had zero issues, and the games look great. I have only heard the fan kick on twice since using it.

One more thing that I really like about this laptop is the build quality. The keyboard feels great to touch, and the chassis just feels so solid. The litany of keyboard function controls are excellent, and I like that the backlighting contains 4 different brightness settings.

I can't recommend it enough. Eluktronics, you will be permanently on my radar and suggested to all of my friends going forward.

Amazon Customer
5.0 out of 5 stars nice build, insane stats
Reviewed in the United States on February 13, 2017
Verified Purchase
Laptop literally arrived within 1 day, which surprised me.

So far, everything has been exactly as I expected it with the reviews. Runs perfectly, professionally packed, nice build, insane stats, etc. My only criticisms are with Windows 10, but that's not really relevant for this review.

Only minor cons I can think of after 2 weeks are that the max volume on the speakers isn't very loud, and the charger cable that came with it is a bit shorter than it could be. Again, these are minor criticisms, overall I am very happy with how this laptop has performed.

wrappedupinbooks
4.0 out of 5 stars Great speed, some issues
Reviewed in the United States on March 6, 2017
Verified Purchase
First: The speed of this machine is 5/5 stars! This is billed as a top line processor with no bloatware, and the difference in boot-up and browsing speed compared to your typical, "off the rack" laptop is just what I was looking for. No constant waiting for spinning circles. In this area, this model stands head and shoulders above the other brands.

The feel of the machine is quite substantial, as well. Quality keyboard and frame. It just feels right, and the backlighting is subtle and classy.

Why 4 stars? I've had it for a month, and a few things downgrade it for me a bit:

The placement of the DC-In jack, at the center of the back, where the "L"-shaped power input goes, means I continually have to reach back and adjust the cord before I place it down on my desk, or else I could damage it if the "L"-shaped input were turned the wrong way against a flat surface. (If you saw it, you'd know what I mean.) It's not a huge problem but it's a nuisance to have to do every time when you don't have to think about this with most laptops, which have the jack on the side.

The battery life is poor. I haven't used this for gaming at all, just Word, Outlook, and simple web surfing, and I already feel tethered to an outlet with (as others have noted) a heavier than average power block.

The disc drive seems to have a glitch in reading tracks with iTunes for some reason. It'll either take forever for it to read the disc or it inaccurately reads tracks as beginning in the middle of songs, which would be problematic if I were to upload those tracks into my library. (Meanwhile, I did not have that problem with those same discs on an external drive plugged into the laptop; also, I checked and have the latest version of iTunes.)

I'm starting to detect "ticks" that seem to be coming from the speakers (single ones, either from the left or the right) when I visit random web sites or, as just happened now, when I received an alert on Outlook. I hope this does not indicate an issue that will get worse; I've only had this computer for one month.

It was advertised as an "anti-glare" screen and apparently this meant matte screen, which can skew toward a gray scheme and sometimes blurriness with some graphics. There was also an apparent compatibility issue with some applications such as Office and iTunes that produced extremely blurred text, for which I had to search the web to find a solution; turns out there was a somewhat obscure setting you had to adjust to resolve the blurring of text on matte screens!

The track pad is generally accurate, though now and then it starts to drift a little farther in the direction of where my finger had been going. (Across the board, track pads on laptops seem to be terrible now, and FWIW this one seems better than most are now...though still not as good as I had on a cheap Toshiba 6 years ago.) Also, as I make a point of rinsing my hands off every single time before using this computer, I was surprised that the trackpad already shows signs of wear after just one month.

So after one month, for speed and overall feel, this laptop gets the highest marks, though some other issues lower the overall grade.

DS
5.0 out of 5 stars Five Stars
Reviewed in the United States on June 2, 2018
Verified Purchase
Best computer I've had yet. Had it for over a year now without any problems at all.
Read more
Helpful
Comment Report abuse