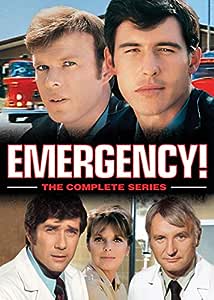 Hit the streets with Squad 51 in Emergency!, the pioneering series that was to portray the real-life drama of those who devote their lives to saving others. With sirens blaring, dedicated paramedics Roy DeSoto (Kevin Tighe) and John Gage (Randolph Mantooth) respond to the most desperate calls in the City of Angels. A heroic medical team, including Nurse Dixie McCall (Julie London) and doctors Kelly Brackett (Robert Fuller) and Joe Early (Bobby Troup) await them at Rampart Hospital, where life-and-death decisions are all part of a day's work. From legendary producer Jack Webb (Dragnet) come all six seasons of this gripping and suspenseful series that captivated viewers and launched a genre of television.

Hit the streets with Squad 51 in Emergency!, the pioneering series that was the first to portray the real-life drama of those who devote their lives to saving others. With sirens blaring, dedicated paramedics Roy DeSoto (Kevin Tighe) and John Gage (Randolph Mantooth) respond to the most desperate calls in the City of Angels. A heroic medical team, including Nurse Dixie McCall (Julie London) and doctors Kelly Brackett (Robert Fuller) and Joe Early (Bobby Troup) await them at Rampart Hospital, where life-and-death decisions are all part of a day's work. From legendary producer Jack Webb (Dragnet) come all six seasons of this gripping and suspenseful series that captivated viewers and launched a genre of television.

4.8 out of 5 stars
4.8 out of 5
947 global ratings
How are ratings calculated?
To calculate the overall star rating and percentage breakdown by star, we don’t use a simple average. Instead, our system considers things like how recent a review is and if the reviewer bought the item on Amazon. It also analyzes reviews to verify trustworthiness.

Psychee Mikey
5.0 out of 5 stars Don't Be A Dummy Like Me...
Reviewed in the United States on September 24, 2015
Verified Purchase
I thoroughly enjoyed but the actual reason I am writing this review is to warn peeps out there that if you order Emergency! The Complete Series and where it says Frequently Bought Together it has Emergency! The Final episodes DO NOT BUY!!! The Final Rescues is included in the Complete Series package so please don't be a dummy like me and inadvertently buy The Final Rescues twice, please. Amazon was cool and is allowing me to return the extra DVD without a problem.
Read more
311 people found this helpful
Helpful
Report abuse

Alan Kline
3.0 out of 5 stars Great content, shameful presentation
Reviewed in the United States on June 23, 2018
Verified Purchase
Emergency! is not only classic 70's TV, it's a series that literally changed how fire departments handle medical emergencies. Few people knew what a "paramedic" was before Jack Webb and his team made them famous. It's great to see the entire series in one box, including the final movies. *However*--it's marred by a shameful presentation of Season 4. Most of the episodes are from dirty, scratched 16mm syndication prints--in some case, horribly damaged film. The degradation of video and audio is what you'd expect in a 16mm reduction print. The entire series was digitized years ago from the original 35mm negatives, so why not present the best available? Also, the syndication prints carry the 5th season opening titles, not the original. So they're not only horribly damaged 16mm reduction prints, they're also mangled from the original release prints. Far below the standard that DVD series buyers have come to expect. Ironically, the final episode of season 4: "905-Wild", a "backdoor pilot" for another Webb series--is a 35mm transfer with the correct opening titles Finally, Season 5 Disc 1 starts with 5 minutes or so of commercials for other series, WHICH CANNOT BE SKIPPED! Inexcusable!
Read more
44 people found this helpful
Helpful
Report abuse

Leigh
4.0 out of 5 stars don't be sure
Reviewed in the United States on November 26, 2018
Verified Purchase
Don't get your hopes up yet. I received the boxset of Emergency and open them. The first on i removed from the box that the set came in was season one and i been damn that season 1 was missing. There was no disc, not even the flappers were in the case. i got them all just not the first one. When i open the set taking out the first season. i thought to myself this box sure is light. So i remove the wrapper and was pist that the discs was gone. SO if you buy look in all the cases.
Read more
20 people found this helpful
Helpful
Report abuse

Busy Bee
5.0 out of 5 stars Human Stories with a Human Touch! Has not aged at all, As Good Today is it was over 40 Years ago !
Reviewed in the United States on February 26, 2017
Verified Purchase
Few shows stand the test of time, advancement of technology, social attitudes, and audience maturity. Emergency is one of those shows that is as enjoyable to me now in my 50s as it was when I was less than 10 years old. Its surprising how much I missed when I was that young, and what’s more surprising is how much I leaned and still remembers from over 40 Years ago when I saw this show. I do get a surprise guest star such as John Travolta and Cathy Lee Crosby and many others before they became house hold names in the near future.
Current issues at the Time related to Race, Indigenous Americans, Human Rights and Women Lib with some episodes dealing with Female Police Women, Reporters, and Doctors breaking into a “Man’s World”, things we take for granted now. Issues such as drugs taking and the generation gap between parents and children. My Young Teenage kids enjoy the shows and get a surprise and two on how things have changed in 40 to 50 years from the 70s to now.
The interaction between the characters is well balanced and enjoyable. Love the Show! I say bring on a similar show, no reality Gory stuff, but a Good Balanced show with deep personalities, based on true events and experiences without the Crazy Music, Wacky Characters and unbelievable stories. Keep the Human touch.

baffle Raffle
4.0 out of 5 stars remember the good old days of TV
Reviewed in the United States on July 31, 2019
Verified Purchase
Emergency is a TV from the 70's- 80s, which was the era of TV I grew up with a "second golden age" well at least for Me it was . The show is a little dated but a good watch and a fun one acting is not that great and the stories are dry. Most important is that it comes from a time when they were starting EMS or Paramedics, which today are a main stay in most cities. looking back is fun and a little bit of a history lesson. Enjoy this show with lots of popcorn and the family-kids ages 8 and up will enjoy it. It is not gory like to days "fact based shows" and no bed hopping or over sexy story lines. Enjoy and thank a first responders and police for all they do--Baffle Raffle over and out.
Read more
8 people found this helpful
Helpful
Report abuse

Sharon Brubaker
5.0 out of 5 stars Grandpa...Tell me about the good old days!!
Reviewed in the United States on January 5, 2020
Verified Purchase
I miss the days when you could sit and watch tv without worrying about what might be seen or the bad language. I feel if I can't sit and watch something with my grandchildren without worrying then I don't need to watch it!! Emergency is a fun show, and a plus is NO Commercials!! :-) But seriously, at the same time it will teach important lessons. Boys and girls both love to watch with well now, yes Pap & Grandma!! This show first aired on January 15th. 1972. Soon to celebrate its 48th, Anniversary and still going strong!! Yes I'm feeling my age, LOL but it's worth it!! I love all of the people that played on this show, at times you'll even see Adam 12 on the scene. Adam 12 may be my next purchase, they first aired on September 21st. 1968. Also a great show!! I loved Julie London, nurse Dixie and Bobby Troup, Dr. Early. Off stage she was an amazing singer, check her out on youtube sometime!! Her husband, Bobby Troup was also a musician, he was an awesome pianist!! There's videos on youtube where he's paying the piano singing and they do duets...they sound awesome!! They were a great couple. I miss them!! It's a great show when you get to know the people playing the parts and feel like you're family!! Mash is another show that fits into this category...an awesome show that could never be reproduced at the level this was was done at...Thanks for the memories!! Now go find a favorite that you enjoyed once upon a time...and tell your story!! A+ Show & Seller!! :-)
Read more
5 people found this helpful
Helpful
Report abuse
See all reviews

Jane
5.0 out of 5 stars Absolutely LOVE LOVE LOVE it!!!
Reviewed in the United Kingdom on June 4, 2019
Verified Purchase
Quality is lower than most streaming services, the automatic remastering has changed the sizing of the picture, essentially cutting off the frame of the picture. Colours can get weird sometimes, i.e. very red but you can counter that with television settings. I just love that I have all episodes together and also the movies in one neat box so I can binge as much as I like! Please make sure you have a DVD player which can play these DVD's since they do have the US region code 1.
Read more
Report abuse

Elise McCoy
5.0 out of 5 stars Emergency
Reviewed in the United Kingdom on April 16, 2019
Verified Purchase
It's lovely to see episodes that I haven't been able to see. If you want to watch them here in the UK, you will need a multi region dvd player, which I have got. Well worth the money for both.
Read more
One person found this helpful
Report abuse

j oneill
5.0 out of 5 stars Emergency
Reviewed in the United Kingdom on September 5, 2019
Verified Purchase
Love it, I enjoyed watching this in Canada as a kid .
Read more
2 people found this helpful
Report abuse

Barbara Jones
3.0 out of 5 stars Always check when you receive the goods
Reviewed in Australia on October 1, 2018
Verified Purchase
Received the complete series but when I opened the box I was missing the first disk of the first series so unfortunately I have not been able to see the polite episode &a couple of other episodes I did send a email in regards to this but haven't heard back
Read more
Report abuse

JULIE FALCONER
1.0 out of 5 stars Disappointed with continually receiving non-compatible Products
Reviewed in Australia on January 24, 2020
Verified Purchase
One more Set of DVD’s that are not suitable to view in Australia. This will be the 4th Set that I have received recently that I can’t watch. AGAIN I AM VERY DISAPPOINTED WITH THIS SERVICE. The products should be checked are compatible to view in the Country they are being sold to.
Read more
Report abuse
See all reviews