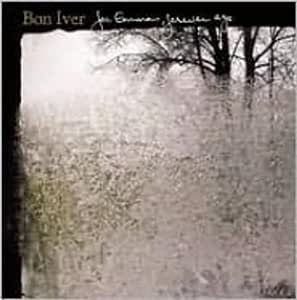 For Emma, Forever Ago

Bon Iver Format: Audio CD
4.7 out of 5 stars 1,032 ratings
Amazon's Choice recommends highly rated and well-priced products.
Amazon's Choice for "bon iver"
See all 8 formats and editions Hide other formats and editions
Includes FREE MP3 version of this album.&nbspProvided by Amazon Digital Services LLC. Terms and Conditions. Does not apply to gift orders.&nbspComplete your purchase to save the MP3 version to your music library.
Available at a lower price from other sellers that may not offer free Prime shipping.

Justin Vernon began recording as Bon Iver following the breakup of DeYarmond Edison, an Indie Folk group similar in tone and manner to Iron & Wine, Little Wings and, to a certain extent, Bonnie "Prince" Billy. Pronounced 'Bohn Eevair', it is French for "good winter" which is spelled wrong deliberately. This debut CD is centered around Justin Vernon, who is the primary force behind Bon Iver, as he moved to a remote cabin in the woods of Northwestern Wisconsin at the onset of winter, alone for three months. From this solitary time emerged a bold, uninhibited new musical focus of all his personal trouble, lack of perspective, heartache, longing, love, loss, and guilt that had been stockpiled over the past six years into songs. The NY Times called this record "Irresistible", and it was given a "Recommended" rating by Pitchfork. 9 tracks. Jagjaguwar Records. 2008.

It's hard to believe that For Emma, Forever Ago is the work of one man. But when Justin Vernon's old band split he hauled himself (and presumably plenty of instruments and recording equipment) to his dad's hunting cabin in the woods of Wisconsin for the coldest season and worked through his issues in musical form. (The name comes from the French for "good winter"--"bon hiver"). By the start of the spring thaw he had recorded the bulk of this stunning debut, originally self-issued to acclaim last year in the USA and now picked up for a British release. Vernon's voice grabs the ear from the start, switching easily into a smooth falsetto (and unusually for a white indie lad, without the slightest intent of emulating Prince). The formula is straightforward. He layers his vocal harmonies, while a gently strummed acoustic rhythm guitar just about holds the centre. All else from horns to slide guitar is mere detail. The quality is rough and ready but the effect is strangely similar though to the slick vocal confections of European women like Bjork and Camille, all mystery and distance. It's the musical equivalent of reading someone else's diary. In code. Through a dirty window. Enigmatic songs like the elegantly stumbling "Creature Fear" with its rowdy horn parts, the resolute opener "Flume" and the evanescent "Team" are just so pretty they seem to glide by without leaving a mark in the snow. Vernon is apparently a straightforward and friendly guy, but For Emma, Forever Ago genuinely sounds like something from a far off place. --Steve Jelbert