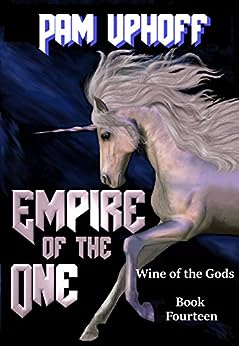 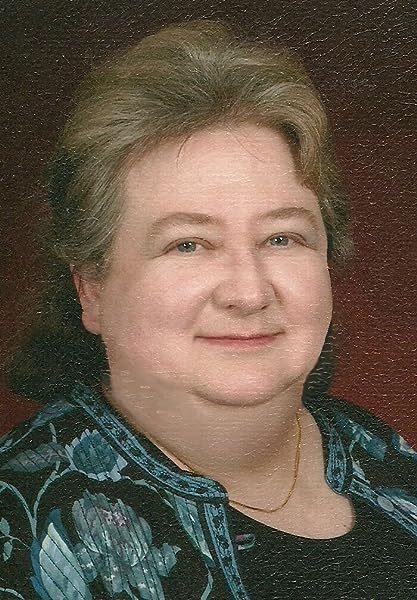 by Pam Uphoff (Author) Format: Kindle Edition
Book 14 of 56: Wine of the Gods Series
See all formats and editions
Sorry, there was a problem loading this page. Try again.
Wine of the Gods #14.

I grew up in California, one of those horse-mad girls.

Horse books, Horse drawings, riding lessons . . . the parents finally surrendered when I was thirteen and bought a horse. And another. And another.

I still have two, a granddaughter and great grandson of my first very own, don't-have-to-share-with-the-sisters, horse.

My reading slipped from horse and dog stories to science fiction, but even though I'm writing science fiction, there seem to be rather a lot of horses in the stories, somehow. And dinosaurs.

My stories in my favorite Fictional Universe, Wine of the Gods, are going up, book by book. In internal chronology:

Explorers -- First of a series.

A Taste of Wine -- A short story collection.

The Dark Lady -- Last of the series, but not the last in this universe.

Empire of the One -- Stand alone novel.

Dancer -- Stand alone novel in the Empire of the One.

Warriors of the one -- Short story in the Empire of the One.

Darkside of the Moon -- Novella.

Cascades -- A collection of stories.

Olympian -- Novella in the Empire of the One.

One the Run -- A collection of stories.

Rael -- Two stories in the Empire of the One.

The Directorate Series is a spin off, following three young characters from previous stories: Ra'd the time-displaced Warrior of the One, Paer Withione, the President's daughter, and Ebsa Clostuone "Kitchen" from Dancer.

A Tale of Three Interns -- Novella.

I'm currently working on a print Omnibus of the Directorate stories. I ought to get that out this summer.

And I might manage to squeeze out three more stories in 2017.

John Van Voorhis
5.0 out of 5 stars A neat twist
Reviewed in the United States 🇺🇸 on December 7, 2021
Verified Purchase
Most of this series I’ve give. Four stars to because they are well written and worth reading again, but didn’t blow my socks off. This one still has the romance bits along with the sci-fi magic bits, but has twisted things up enough to make it really fresh. While I sometimes wish the older characters in the story showed up more often, I appreciate the fact the the plot doesn’t get mangled to force characters into places they should t be and the new characters are making me want to keep on reading.
Read more
Helpful
Report abuse

David L. Burkhead
5.0 out of 5 stars Excellent cross-dimensional more or less urban fantasy
Reviewed in the United States 🇺🇸 on October 23, 2014
Verified Purchase
When I got this the full title was truncated on the display so I didn't see "book 12". Nevertheless, I was able to get into the story quite easily.

One thing jarred me. At the beginning we're introduced to several characters and I expect them to be who we'll be following. Soon, however, we're looking at completely new characters and the original characters retreat very much into the background. As it happens, much of the story action is the result of what they were doing in the background but I expected a more active, on stage, roll given that beginning.

That's a distinctly minor point, though. Ms. Uphoff produced an intriguing mix of magic and technology. Or is it? Is the magic, magic or simply a different form of technology? I'm either case I enjoyed it and the story around it.

There was adventure. There was romance (some, anyway). There was political intrigue.
Read more
2 people found this helpful
Helpful
Report abuse

Amazon Customer
5.0 out of 5 stars Ties the Whole Series Together
Reviewed in the United States 🇺🇸 on March 26, 2014
Verified Purchase
Empire of the One is the ninth full novel in the Wine of the Gods series. Like its predecessors, it's a unique blend of science fiction and fantasy with a compelling story, touching moments, and plenty of action. This particular book also helps tie the entire series together. Wondered what happened to the marooned Orange Team in the first book (Outcasts and Gods)? You'll find out here. Many of the loose ends from Spy Wars are also neatly tied up and other open questions throughout the series answered.

Due to the cross-series nature of this book, I wouldn't recommend reading it until you've read the other books in the series first, at minimum: Outcasts and Gods, Explorers, Spy Wars, Comet Fall, Dark Lady, and Warriors. Each of those books are also fantastic reads which I'm confident you'll find very enjoyable.
Read more
5 people found this helpful
Helpful
Report abuse

JAK
5.0 out of 5 stars A view of the Oners
Reviewed in the United States 🇺🇸 on December 12, 2016
Verified Purchase
Throughout this series the Oners have been portrayed as complete heels. Religious zealots for the most part, their goal is to destroy the Earthers and control the natives of the worlds they invade.

With this book, we get a view of the Oner society, it's hierarchical structure and the religion at the center of its core. The nice thing about this is that it humanizes the Oners and make them more than just "the enemy."

All in all it was a better story than I expected. Looking forward to reading the next book in the series.
Read more
Helpful
Report abuse

George B. Pratt
5.0 out of 5 stars Best of the series so far
Reviewed in the United States 🇺🇸 on April 8, 2015
Verified Purchase
This book is my favorite of the series. I really enjoy this series especially the fact that the "point of view" characters keep changing from book to book. The hero of this book Xen is now my favorite character in the series.

This story is interesting because it take place almost entirely on the home planet of the "Empire of the One". As usually for this series, the characters are very strong. The only flaw in this novel is the naming convention used by the Oners is confusing.

This series really resonated with me. I read all 19 current volumes in about 30 days.
Read more
One person found this helpful
Helpful
Report abuse

No spoilers here. As the title implies, we get to learn about the Empire of the One. However, there is no lack of action, be assured.

The entire series is worth diving into, even if some of the early books may seem a bit odd...
Read more
One person found this helpful
Helpful
Report abuse

Cedarlila
4.0 out of 5 stars New names, same adventures
Reviewed in the United States 🇺🇸 on July 1, 2014
Verified Purchase
I was a little thrown by the new names, but this book is fun, and I love that Pam Uphoff has her villanous evil empire revealed for, well, not so villainous, and not a monolith. I always enjoy her books, and this one is no exception. Fun spy adventures and horsiness.
Read more
3 people found this helpful
Helpful
Report abuse
See all reviews

Amazon Customer
5.0 out of 5 stars Good book!
Reviewed in the United Kingdom 🇬🇧 on March 24, 2014
Verified Purchase
Excellent story, giving further details about the bad guys of the series. Further development of the heroes and their children
Read more
Report abuse
See all reviews
Report an issue
Does this item contain inappropriate content?
Report
Do you believe that this item violates a copyright?
Report
Does this item contain quality or formatting issues?
Report