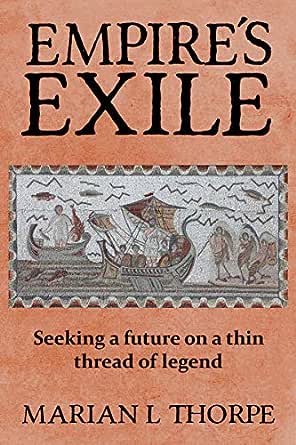 You've subscribed to Empire's Legacy! We will preorder your items within 24 hours of when they become available. When new books are released, we'll charge your default payment method for the lowest price available during the pre-order period.
Update your device or payment method, cancel individual pre-orders or your subscription at
Your Memberships & Subscriptions
There was an error. We were unable to process your subscription due to an error. Please refresh and try again. 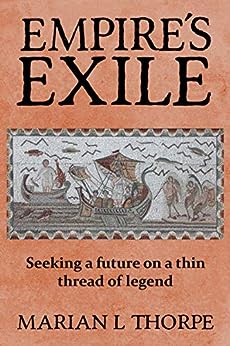 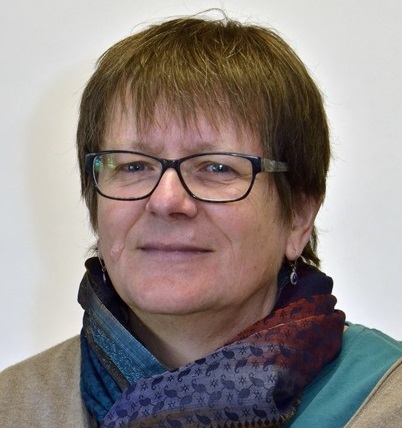 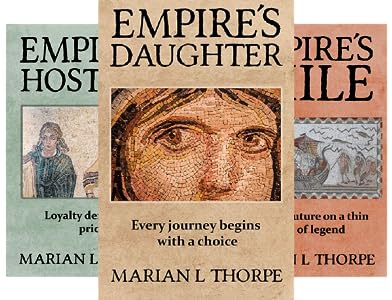 'Empire's Exile might be Marian L. Thorpe's finest work so far. The world, the characters, the events, even languages are so real that it's hard to remember that this book is (or pretends to be) fantasy.' Bjorn Larssen, author of Storytellers

'I enjoyed this book the most of the three...plenty of nail-biting action scenes and moments of violence and terror. I also shed tears on more than one occasion. The pacing of this novel is excellent, the journeying broken up with plenty of interludes, but always with the focus on reaching the destination. The final outcome is satisfying, with no loose ends.' Discovering Diamonds Historical Fiction Reviews

'This whole series has been one of the best reading I've experienced... a goldmine of anticipation, apprehension, joys and hardships, survival and all-consuming, accepting love.' Cover to Cover Reviews

'I enjoyed the first two books of the Empire's Legacy trilogy, Empire's Daughter and Empire's Hostage, enormously, so it is no small thing for me to announce that Empire's Exile is my runaway favourite of all three.' Mai's Musings Reviews

The Two Doctors Review
4.0 out of 5 stars A Worthy Conclusion to Empire's Legacy
Reviewed in the United States on June 14, 2020
Verified Purchase
Empire's Exile, the final book of the Empire's Legacy series. Thorpe continues to impress.

I first read Empire's Daughter on a plane to Oregon. That book hooked me into Marian Thorpe's precise and descriptive writing style. Her worldbuilding is always superb, and her characters relate and connect to one another with a depth unmatched by many writers.

Overall, the Empire's Legacy series is a unique blend of fantasy and historical fiction which should attract readers of both genres. I loved this whole series. While neither Empire's Hostage nor Empire's Exile matched how I felt about Empire's Daughter, both books are worthy sequels to what I consider to be one of the greatest works of fiction I've read.

In Empire's Exile, we see Casyn and Lena travel the world in search of a solution to the problems faced by their respective homelands. Their journey is long and treacherous and filled with moments of sadness, betrayal, power, and greed. It's a brutal tale. But it's worth the journey.

Thorpe has created a remarkable new world for her series, one that is both familiar and different. Her world is similar to Europe after the collapse of the Roman Empire, but it is a world with its own geography, institutions, languages, and one with its own history of war, alliances and treachery.

In Empire's Exile, Thorpe places a young couple, Lena and Cillian, into this world, where they have been declared traitors to the Empire and must start a forced journey of exile. Like many good stories, this one seems simple, at least at first. The immediate goal of their journey is to survive all the hardships they face. Overcoming these hardships, which involves courage and adaptability, makes a gripping story, but the journey also leads to romance, which leads to questions of love and loyalty. The weaving of plot and subplots, as well as the quality of the writing, produces a standout book.

A close comparison can be made with Ursula K Le Guin's The Left Hand of Darkness. That book could be dismissed as science fiction, the way Empire's Exile could be dismissed as historical fantasy. Both books are genre fiction in an obvious sense, but both are more. Both are literary novels that produce emotions and raise questions in ways that go beyond the usual genre book.

Thorpe's books may be similar to Le Guin's in a number of ways – but they are truly original and not imitations of the novels of any other writer. Empire's Exile continues a series well worth following.
Read more
Helpful
Comment Report abuse

Karen Heenan
5.0 out of 5 stars Write Faster!
Reviewed in the United States on August 20, 2019
Verified Purchase
Book 3 of the Empire series is a fitting conclusion to a series that sucked me in from the start. I'm happy to know that the author is working on another trilogy to follow this one, involving some of the lesser characters who didn't get enough time or storyline in the first three books. I write myself, so I know it's not a fast process, but I'm waiting here, waiting for the next book. Waiting...
Read more
Helpful
Comment Report abuse

Amazon Customer
4.0 out of 5 stars Book 3 takes a different turn.
Reviewed in the United States on December 16, 2018
Verified Purchase
Unlike books 1 & 2, this book has less action, and focuses more on personal and interpersonal relationships. Think Marion Zimmer Bradley. Still quite good, and closes this series out nicely, while still leaving room for a sequel.
My only complaint - it still has copy and format issues.
Read more
Helpful
Comment Report abuse

Jessica Belmont
5.0 out of 5 stars everything I want in an Historical Fiction series
Reviewed in the United States on June 16, 2020
I love this series so much. Marian Thorpe is a must read author in my mind and she is definitely one of the authors that got me into Historical Fiction.

The author has created a world that is so vivid. Familiar, yet different. I love the geography and the culture that we get to be enveloped into.

The plot line of Empire’s Exile is fantastic. It is a journey of hardships and overcoming them. The characters are courageous and realistic. The story is absolutely gripping and I didn’t want to put it down.

This is everything I want in an Historical Fiction series. Highly recommended!!!

*I received a free copy of this book from Rachel’s Random Resources in exchange for an honest review on the blog tour. All opinions are my own and unbiased.*
Read more
Helpful
Comment Report abuse

Gardener Eileen
5.0 out of 5 stars Satisfying end to an epic trilogy
Reviewed in the United States on May 5, 2020
Lena and Cillian’s saga continues with this final book in the trilogy. They discover an ancient civilization, Cillian’s skill as a negotiator is tested, and Lena’s deadly prowess gets even more lethal. Both grow as people, while they become even more adept on the battlefield. Highly recommend this great series.
Read more
Helpful
Comment Report abuse
See all reviews

Whitey
5.0 out of 5 stars Great Conclusion of the Trilogy
Reviewed in the United Kingdom on June 26, 2020
Verified Purchase
As the blurb states, this is the third book in the Empire's Legacy trilogy, and I've read the previous two. However, for those who haven't, once again Ms Thorpe gives a round-up of the story up to this point, which is a great idea and useful not only to those who might be coming to this book without having read the others, but also as a reminder for those who have, but maybe need a refresher.

I think I enjoyed this book the most of the three. Lena is a thoughtful narrator, always keen to learn from her experiences. She's more complex now as a character because so much has happened to her since the series - and the wars - began. She isn't the only one exiled, and her relationship with her travelling companion, Cillian, is equally complex. He's a difficult character to 'read' and Lena often struggles to work out what he's really thinking. Then, just when she thinks she's got the measure of him, circumstances cause him to show yet another facet of himself. This relationship, as with all others in the series, is believable. All the way through the trilogy, characters like, love or loathe each other and every time, we can understand exactly why. There is no love at first sight, and the characters' feelings develop as they get to know others. It makes for a satisfying read.

Of course, it's not just about the people. There are plenty of nail-biting action scenes and moments of violence and terror. I also shed tears on more than one occasion. The pacing of this novel is excellent, the journeying broken up with plenty of interludes, but always with the focus on reaching the destination. The final outcome is satisfying, with no loose ends and yet... I thought I detected a little glimmer of a possibility for a spin-off series.

This is not historical fiction. The world which Lena inhabits is completely fabricated, but it rings true. With maps, and the use of fictional ancient languages, Ms Thorpe builds a world which feels real, and the people who inhabit it are human; there is no fantasy element, no magic.