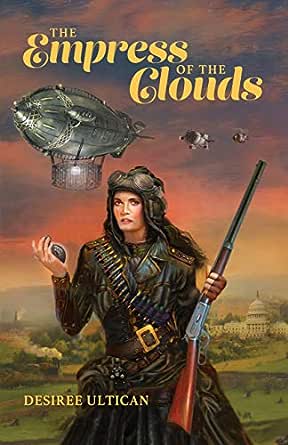 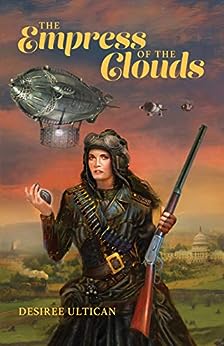 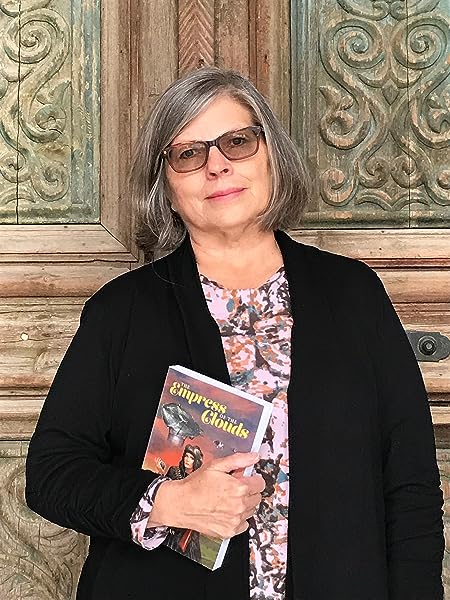 The Empress of the Clouds Kindle Edition

"Readers who love derring-do with charismatic, old-school technology will find this a diverting read. A wonkish but rousing fantasia." - Kirkus Reviews
"As history, mystery, and fantastic encounters coalesce, readers are treated to a lively alternate history powered by not just an airship's social and political promise, but a widow's search for meaning, a new life, economic security, and her place in the world." - D. Donovan, Senior Reviewer, Midwest Book Review
"...[T]he well-constructed plot creates a real sense of adventure. Evaline is an inspiring heroine for anyone who longs to see a bold and self-reliant woman stare down danger and do what's right." - BookLife
"With a strong plot, interesting characters and a marvelously detailed setting, The Empress of the Clouds...is an engaging, gripping steampunk, (alternate history) book that will keep you turning pages....The Victorian Era is romantically displayed, along with elements of the industrial revolution, filling the pages with great detail, precision and care to make this tale as real and 3-dimensional as possible. - T N Traynor, Chick Lit Café Book Reviews

JimFoxy
4.0 out of 5 stars Exciting Romp Thought the Air
Reviewed in the United States on March 12, 2020
Verified Purchase
The Empress of the Clouds by Desiree Ultican
The 19th century is drawing to a close as a burst of new technology and invention sweeps across the land, even to Joplin, Missouri, a boom town known as much for its lawlessness as its rich ore deposits. The heroine of the tale is Evaline "Evvy" Amstel, who is newly widowed and who inherits considerable dept and a struggling airship company. Evvy confronts the treat of financial ruin by learning to pilot the airships herself, while at the same time she tries to find out who killed her husband and to learn why so many mysterious foreigners of low character are descending on her small town. What she learns is that a vast conspiracy is afoot, aimed at the destruction of the government of the United States.
What I Liked:
This is a fast-paced page turner, rich in detail and with an interesting cast of characters. Editing is pretty good, and the technology described is mostly credible and appropriate to the time period. Obviously, much research on the part of the author has enabled her to create a tale that seems credible, even if far fetched. I am not sure what exactly defines a steam-punk novel, unless it has to have a lot of steam engines puffing away. If that is key, then this is definitely steam-punk.
The depth of the characters is a strong point. The major players seem like real people with strengths and weaknesses, hopes, and fears. These include Evvy, herself, and the town deputy Sean McTavish, as well as Evvy's step-daughter, Bet. Even Evvy's late husband, Heins Amstel, becomes a well-defined (posthumous) character, as well. This is a clean read. There were adult situations, but nothing overly descriptive or graphic.
What I Did Not Like:
I did not particularly like the ending. I can't explain why without giving away spoilers, but the reader will see what I mean, I think. The villains seemed to all be pretty much the same malignant thug of one sort or another, though the chief villain, comes across more as an evil genius than a thug. More could have been done with them; they were adequate, at best. There were a few comma and grammatical errors, but not many.
There was mention of a pack of coyotes pulling down a buck deer in Indiana or thereabouts. Sorry, but this does not ring true. This is very untypical coyote behavior, and there would have been few, if any coyotes in this area in 1900. The whole incident should be deleted, as it is an obvious error and adds nothing to the plot. The author also mentions firing from the "butt" of the rifle. And another non-sequitur was a mention of firing a six-shooter until the "barrel was empty." The author should have said "cylinder" not barrel. I should mention that at the last, Deputy McTavish was armed with two Colt .45s but somehow it never occurred to him to use them. There were other unclear sentences that cry out for revision, but these are enough to get the idea.
Conclusion:
This is an exciting tale and with the help of a good editor, it could be turned into a first class novel. I think the average reader will probably not notice the flaws, and will find it to be excellent entertainment. It is worthy of a 4-Star rating.
Read more
3 people found this helpful
Helpful
Comment Report abuse

kansasplains
5.0 out of 5 stars Can the missing airship be found?
Reviewed in the United States on January 23, 2020
Verified Purchase
Before there were horseless carriages there were dirigibles, and a few forward-thinking inventors thought airships held the key to travel in the 20th Century. German businessman, Heinz Amstel, was sure of it. But Heinz was not to see that future -- he was murdered one night in the gritty mining boomtown of Joplin, Missouri. Some of his secrets came to light -- including his stealthy depletion of the inheritance of his wife, Evaline Amstel -- but what had Heinz done with the substantial funds given to him by August Marchand, a wealthy, Civil War embittered Southerner, designated for the construction of a mysterious airship capable of carrying an ungodly heavy load? And why is Count Frederick von Zepplin involved? Evaline teams with local deputy Sean McTavish, who undertakes the tasks of solving the murder and finding the missing airship. Will they be able to reach both goals? Having lived in Joplin, and read a lot about Joplin's rowdy, boisterous past, this alternative history fits right in. A sparkling gem of a story to cuddle up with on a dark night.
Read more
One person found this helpful
Helpful
Comment Report abuse

Webdog
5.0 out of 5 stars A fantastic mystery firmly rooted in history.
Reviewed in the United States on January 27, 2020
Verified Purchase
The time, 1896, the dawn of the electric, aeronautic and automobile ages. The place, Joplin, MO at the turn of the century. A brutal murder, to which the law, save one determined deputy, has turned a blind eye. A faltering airship company. These are the circumstances in which newly widowed Evaline “Evvy” Amstel finds herself after the untimely death of her husband Heinz, an inventor and owner of the The Amstel Airship Company. As one shocking revelation after another threatens to turn her world upside down, with the prospect of losing her social standing in a society in which she really doesn’t feel totally comfortable, Evvy finds the courage and strength to uncover the secrets of her husband’s secret life, right the faltering airship company and, if it exists, to determine the whereabouts of what would have been his crowning achievement, the highly advanced airship, The Empress of the Clouds. And she’s not the only one who wants to find it.

At the time, the world was bristling with a seemingly endless flow of new ideas, scientific achievements and technological advancements. Society was fast changing in order to keep abreast of these advancements. With reference to many of the people, places and events that actually took place around the turn of the century (including the Great Airship Mystery of 1896), the author has done an excellent job of weaving historical fact into this work of fiction. The story is well rooted in the science and sensibilities of its time. Therefore the technology outlined in the story may at first seem fanciful yet remains wholly plausible for the period in which it is set.

The characters and settings feel very real. The story moves forward with realistic logic without the use of sudden surprises or events to explain anything away, a welcome relief from that overused device that often insults the reader’s intelligence. The actions of the characters always feel true to the reality in which they find themselves. The heroes of the story are real people. They have faults, they have fears, they make mistakes. But they take action because they must and they do the best they can with the talents they have and a sheer determination to do right by the world. That means putting a stop to a mega-maniacal villain, bent on righting what he sees as a monumental injustice, no matter who he hurts or the damage he does in the process.

“The Empress of the Clouds” is the best book I have come across in years. If only all stories were so well thought out and progressed in such a believable and satisfying way. I thoroughly enjoyed spending time in the world the author has crafted. I highly recommend this book to anyone who loves to lose themselves in a well written story. Drama, mystery, history, thrills, there is something here for just about everyone.
Read more
2 people found this helpful
Helpful
Comment Report abuse

Laura Allran
5.0 out of 5 stars Interesting From Beginning to End
Reviewed in the United States on February 17, 2020
Verified Purchase
Usually I don't read books from cover to cover because they don't keep my interest. However, this book full of drama, mystery and action, kept my interest from cover to cover. It took me back to a world just experiencing advances in technology and the excitement of the unknown. It was filled with details of the lives back then, adding in the aspects of history and science. Not only was the book enjoyable to read but it was also filled to nuggets of learning. Evaline's character was admirable, it mentioned some her flaws but this made her more personable and transparent. The only disappointment was that the book had a ending. I would like to read more of Evaline adventures as I was engrossed with her character.
Read more
One person found this helpful
Helpful
Comment Report abuse
See all reviews from the United States