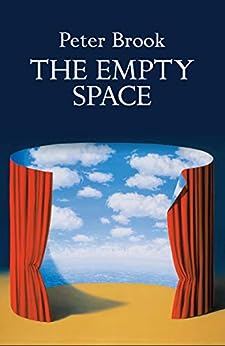 “Peter Brook has written a book that is really about the theater. When he speaks about himself, it is with a view to impart ideas pertinent to craftsmen, serious playgoers and critics alike…What I treasure most in the book is that it always harks back to the artistic, social psychological, practical bases of the theater as a concern of cultural significance.” ― Harold Clurman, The New York Times Book Review

“This is a brilliant book, and should be read by many besides the passionate few to whom it will be required reading.” ― W. A. Darlington, The Daily Telegraph (London)

“Theatergoers who care about the nature and destination of contemporary drama will be drawn to The Empty Space with ravenous interest.” ― Time

“The parts of the book which I enjoyed without reservation were Brook’s brief but marvelous analyses of Shakespeare’s King Lear and Measure for Measure, two plays of which he has made outstandingly the best production of our day.” ― Tyrone Guthrie, The Minneapolis Star

"A classic...a hugely influential analysis of the problems confronting contemporary theatre. It's a powerful expression of the belief that it is performance, not a play text in the abstract, that is the essence of stage art." ― Paul Taylor, The Independent --This text refers to the paperback edition.

Peter Brook's career, beginning in the 1940s with radical productions of Shakespeare with a modern experimental sensibility and continuing to his recent work in the worlds of opera and epic theater, makes him perhaps the most influential director of the 20th century. Cofounder of the Royal Shakespeare Company and director of the International Center for Theater Research in Paris, perhaps Brook's greatest legacy will be The Empty Space. His 1968 book divides the theatrical landscape, as Brook saw it, into four different types: the Deadly Theater (the conventional theater, formulaic and unsatisfying), the Holy Theater (which seeks to rediscover ritual and drama's spiritual dimension, best expressed by the writings of Artaud and the work of director Jerzy Grotowski), the Rough Theater (a theater of the people, against pretension and full of noise and action, best typified by the Elizabethan theater), and the Immediate Theater, which Brook identifies his own career with, an attempt to discover a fluid and ever-changing style that emphasizes the joy of the theatrical experience. What differentiates Brook's writing from so many other theatrical gurus is its extraordinary clarity. His gentle illumination of the four types of theater is conversational, even chatty, and though passionately felt, it's entirely lacking in the sort of didactic bombast that flaws many similar texts. --John Longenbaugh --This text refers to the paperback edition.

Peter Stephen Paul Brook CH CBE (born 21 March 1925) is a highly influential British theatrical producer and director. During the 1950s he worked on many productions in Britain, Europe, and the USA, and in 1962 returned to Stratford-upon-Avon to join the newly established Royal Shakespeare Company (RSC). Throughout the next the 1960's he directed many ground breaking productions for the RSC before in 1970 forming The International Centre for Theatre Research in Paris. --This text refers to an out of print or unavailable edition of this title.
Read more

4.5 out of 5 stars
4.5 out of 5
315 global ratings
How are ratings calculated?
To calculate the overall star rating and percentage breakdown by star, we don’t use a simple average. Instead, our system considers things like how recent a review is and if the reviewer bought the item on Amazon. It also analyzes reviews to verify trustworthiness.

Michael Kennedy
5.0 out of 5 stars Perhaps one of the most dangerous books you will ever read. So read it.
Reviewed in the United States on April 21, 2014
Verified Purchase
Be careful. This book could change your life. It changed mine. I read The Empty Space in 1974. I was so blown away by the ideas within this book, I quit my job, moved to a large metropolitan area, and ended up running a theater, directing plays in other theaters, then teaching theater for the next twenty years. What this book does is teach important lessons in creating and appreciating art. Upon rereading The Empty Space, I find some of the writing to be a bit pretentious, but on the whole, the lessons are solid. Whether exploring theater, literature, art, music, or any other creative endeavor, this books shows that experiencing an artistic event can and should be a transformative experience. What is particularly refreshing is it doesn't sugar-coat the arts. There is no formula or how-to instructions on creating good work. Risk is not only encouraged, it is necessary. Brook also shows how the arts can be manipulated to lull and pacify. The four essays/lectures on Deadly Theater, Holy Theater, Rough Theater, and Immediate Theater are as fresh to day as they were 40 years ago.
Read more
24 people found this helpful
Helpful
Report abuse

Patricia A. McKnight
4.0 out of 5 stars What is theatre to Peter Book and why I should care what he thinks. A persuasive discussion
Reviewed in the United States on May 11, 2018
Verified Purchase
A distinguished actor and director offers his beliefs about theatrical productions and the important role of theatre in our lived. Highly recommended if you are a "theatre junkie," as I am. Thoughtful discussion by someone who is immersed up to his neck in the processes about which he writes. Highly recommended
Read more
3 people found this helpful
Helpful
Report abuse

L. Goldstein
2.0 out of 5 stars Not Useful
Reviewed in the United States on December 13, 2020
Verified Purchase
I bought this book based on a recommendation. Honestly, I have no idea what they were thinking. I guess if you are into theoretical flapdoodle, then this might be for you. But there was nothing of any practical use that I could get from it.
Read more
One person found this helpful
Helpful
Report abuse

A concerned customer
5.0 out of 5 stars Brook's Genius
Reviewed in the United States on January 10, 2007
Verified Purchase
What is great about the empty space is that Peter Brook's theory is relevant to all art forms. The four theatres he describes are basically categories in which all art falls into. This seems odd at first until you see what he is describing. What turns most people off is the idea of over-categorizing art. But Brook's theatres tend to be more or less critiques of individual performances, or what the effect of that performance is on the audience. This is also easy to read. Too much theatre philosophy gets bogged down by either melodramatic thespian writers, or rambling philosophies from those who have not trained themselves to ge good writers. With Brook, it is pretty straightforawrd, not always easy to understand mind you, but straightforward. If you are at all interested in the arts then this is a must read.
Read more
9 people found this helpful
Helpful
Report abuse

Gavin White
4.0 out of 5 stars Challenging
Reviewed in the United States on December 18, 2020
Verified Purchase
There was some damage on the physical book itself, which was a downer.

However, despite being 52 years since its original publishing, The Empty Space identifies many challenging questions about the theatre that are still applicable today. It's a very contemplative piece that warrants occasional pause and process.
Read more

4.0 out of 5 stars Challenging
By Gavin White on December 18, 2020
There was some damage on the physical book itself, which was a downer.

However, despite being 52 years since its original publishing, The Empty Space identifies many challenging questions about the theatre that are still applicable today. It's a very contemplative piece that warrants occasional pause and process.

pleineluneTop Contributor: Pets
TOP 500 REVIEWER
5.0 out of 5 stars GREAT BOOK for THEATRE MAJORS or ANYONE interested in Theatre!
Reviewed in the United States on December 25, 2019
Verified Purchase
This is one of those must haves for THEATRE LOVERS! Interesting perspective and a unique book. Bought for one of my students majoring in theatre.
Read more
Helpful
Report abuse

Peter
5.0 out of 5 stars A classic
Reviewed in the United States on April 6, 2017
Verified Purchase
I enjoyed this book immensely when I was young, so I recently gave it to my son, a budding filmmaker. He couldn't stop talking about it. Nice to know it stands up to time and new generations.
Read more
4 people found this helpful
Helpful
Report abuse

Emily Marie Valdes
5.0 out of 5 stars Not much else to say
Reviewed in the United States on September 22, 2019
Verified Purchase
Just as pictured
Read more
Helpful
Report abuse
See all reviews

Calico Cat
5.0 out of 5 stars Well worth a read if you look for the art of acting
Reviewed in the United Kingdom on December 2, 2020
Verified Purchase
Anyone who looks upon acting as an art rather than just entertainment would really appreciate this book.
Read more
One person found this helpful
Report abuse

KR
3.0 out of 5 stars Three Stars
Reviewed in the United Kingdom on September 11, 2018
Verified Purchase
Not for those that haven't written before.
Read more
One person found this helpful
Report abuse