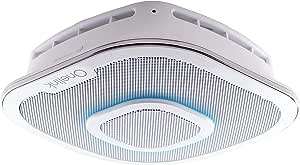 Visit the FIRST ALERT Store
3.9 out of 5 stars 730 ratings
Available from these sellers.

Can I play music to other Alexa devices or my Everywhere group with Safe & Sound?

Not at this time. Alexa and Safe & Sounds keep getting smarter over time, so you can look forward to more audio capabilities in the future.

Does the Onelink Safe & Sound require rewiring or professional installation?

The Onelink Safe & Sound is meant for DIY installation. Just remove your current alarm and bracket, and install Safe & Sound. Easy adapter plugs are included, so you don't have to rewire to install the alarm.

Once the Safe & Sound unit is wired into my ceiling, what are the next steps?

Once the alarm is installed, the unit will walk you through setup and Alexa integration with Onelink Home app. If you have more than one Safe & Sound, set each one up though the app as you install the units, before moving on to the next one.

How does the Safe & Sound nightlight feature work?

When set on autobrightness, the LED lights glow to light your route in the dark, and get brighter in the day, to ensure visibility in an emergency. You can turn off autobrightness, or adjust brightness and usage through the Onelink app.

Do the LED lights on Safe & Sound also indicate power?

The LED lights also indicate AC power is being received. When you disable the nighlight, 2 LEDs will glow green on the Onelink alarm, letting you know that you have AC power. If the LED is off, your alarm is running with battery backup.

Protect your home and your family, and enjoy a hands free voice controlled speaker with a great audio experience at the same time. First Alert's Onelink Safe & Sound is a smart smoke and carbon monoxide alarm with Alexa Voice Services enabled. Ask Safe & Sound to play music or audiobooks, read you the news, control smart home devices, and more. Leveraging your home’s hardwiring and using optimal ceiling placement, Safe & Sound fills any room with immersive, 360 degree high end audio. Advanced microphones let Safe & Sound hear your voice commands from any direction—even when music is playing. This 3 in 1 alarm is also powered by First Alert’s intelligent smoke and carbon monoxide protection, and warns you about danger in your home and its location with an 85 decibel alarm plus voice alert. With First Alert’s free Onelink Home app, Safe & Sound can also remotely notify you of a smoke or carbon monoxide emergency in your home via your phone or tablet. Safe & Sound installs just like a standard hardwired smoke alarm, so you can easily replace existing alarms. Adapter plugs are included to save you the hassle of rewiring and to simplify installation. It’s compatible with Apple HomeKit.

3.9 out of 5 stars
3.9 out of 5
730 global ratings
How are ratings calculated?
To calculate the overall star rating and percentage breakdown by star, we don’t use a simple average. Instead, our system considers things like how recent a review is and if the reviewer bought the item on Amazon. It also analyzes reviews to verify trustworthiness.

Mike
5.0 out of 5 stars Tips and Tricks after installing 12 OneLink Safe and Sounds
Reviewed in the United States on July 20, 2018
Style: Onelink Safe & SoundVerified Purchase
EDIT: after 2 months some of the weaknesses become more clear. Whenever the product is disconnected from the WiFi, the nightlight defaults to full brightness forcing you to reconnect to set it back to auto-brightness.

I just spent 2 hours replacing all 12 of my smoke detectors with Onelink Safe and Sounds to get Alexa in every room. I can tell you, I definitely found some improvements to how I would've started installing from the 1st one. So here I am sharing what I learned. It shouldn't take you more than 2 minutes to install each one.

1. Don't rewire. Each detector comes with 3 different adaptors presumably for different brands of smoke detectors. I rewired my 1st one before just using the provided adaptors.

3. Make sure you set up all the devices one at a time ON YOUR PHONE as SOON AS YOU INSTALL THEM. Don't be a knucklehead like me and install an entire floor before trying to sych. I had to wait until they stopped flashing then moving the ladder around to press the button 3 times to reset each. Otherwise my phone would detect the hallway when I wanted to set up the bedroom.

Out of 12 I got 1 dud which wouldn't stop chirping no matter what after wiring. But when I used another Onelink where that one was supposed to go in the closet, that one worked. So I'm in the process of getting that one replaced from amazon.

I mainly bought the OneLink for its Alexa integration. I have basically replaced all my lights in the house with Phillips Hue and having voice control is invaluable to me. In this aspect, the OneLink and Alexa do a great job together to allow me to turn off all the lights. I am also in the process of setting up an IFTTT alert which will turn on all the lights in my house when smoke alarms are triggered. I'm ok with the rest of the features.

Speaker quality is okay. It's a bit quiet and you get an equalizer with a balanced setting and a default setting. Default setting sounds better but balanced setting is louder but flatter. Don't expect bumping bass at all especially at low hz. It's passable but if you crank it up, warping starts. You can definitely listen to Top 40 with no issues in your room.

The alarm itself is just a normal smoke alarm screeching however this is in-line with other products including the Nest. It would be nice to be able to switch to different alarms. Room announcements are limited as well by what's pre-programmed. It would be nice for me to be able to use text to speech for room names instead of them being pre-programmed "master bedroom" "kids bedroom" "guest bedroom." I thought Alexa could do text to speech?

The OneLink app is also a little difficult to use. Other than my slight mishap of trying to sync all the alarms on one floor, sometimes I would accidentally miss the very easy to miss "alexa integration" button on the bottom of the GET STARTED. I would then have to reset the smoke detector again to get the prompt back up. That was annoying.

Overall I think it's a good product with excellent Alexa integration which is why I bought it. However, the nightlight, speaker, and

Doug
1.0 out of 5 stars Not worth it.
Reviewed in the United States on September 9, 2018
Style: Onelink Safe & SoundVerified Purchase
The First Alert will not connect to Alexa everywhere for music. Just know that before you spend $200 on one of these. The sound is not very good at all. Kinda sounds like its canned with no bass and if you turn it up the sound is worse.
The app is terrible and only works "sometimes ". It took awhile to get my phone to connect to the unit and a few days later the color controls stopped working and its stuck being red now.
Basically is a expensive fire and carbon monoxide monitor now that's stuck with a red light.
I would not suggest it.
Read more

AndyD
5.0 out of 5 stars A Major Upgrade in Home Safety
Reviewed in the United States on July 10, 2018
Style: Onelink Safe & SoundVerified Purchase
Out of the box and 10 minutes later I have alexa on my ceiling. Installation was easy as described - the app provides very clean step by step instructions. Completely DIY, no user guide or manual was required for my experience. My alarm is centrally located on the second floor and the speaker can reach every room with no problem - great for music! The night light is very bright, but can be easily adjusted in the app, I recommend adjusting the light before bedtime.

I cannot wait to link this my other alexa devices. I will be buying another one for the basement.
Read more
93 people found this helpful
Helpful
Report abuse

Jeremy
3.0 out of 5 stars Feb 2020 update: Cool, might finally be ready
Reviewed in the United States on September 9, 2018
Style: Onelink Safe & SoundVerified Purchase
February 2020 update: Airplay 2 has been released, and I decided to re-purchase the safe and sound. Setup was far better than it was the first time, and it only took about 3 minutes once it was attached to the ceiling. Setup was a huge issue last time, and the app was very unstable. It seems the First Alert took some time to clean up the many bugs within the app and the device. I’m adding a third star, and will update again after I see that everything is stable.

Cool idea, but I ended up returning it for a few reasons. I found the speaker subpar for the price point. I wasn’t expecting too much due to the size, but it was way overhyped by First Alert. I did not like that I couldn’t disable Alexa without the constant red light. I don’t care for Alexa, and it really wasn’t why I purchased the Safe and Sound in the first place. Along the line of light problems - this thing is way too bright to be in a bedroom, and there’s no way to make it as dim as a normal detector. I really wanted the Airplay 2 capability and a solid HomeKit enabled smoke/CO alarm. I fought with the Homekit setup for longer than I should have needed. My entire house is build around Apple’s Homekit. Light bulbs, switches, multiple Apple TVs, 4 HomePods, along with many others, and this was by far the largest hassle to get integrated into my Homekit setup. I had to factory reset and begin the setup again at least four times. I did contact support to see why I was getting some of these bugs, and they were quite responsive, but this was released before it was really ready for prime time. I might purchase these again once the price drops, some of the shortcomings are fixed, and Airplay 2 is finally added, or I will wait for their newer Homekit smoke/co models to come out and skip the Airplay 2 speaker all together.
Read more
63 people found this helpful
Helpful
Report abuse

Joe C.
4.0 out of 5 stars Smart advance in smoke detectors.
Reviewed in the United States on June 11, 2018
Style: Onelink Safe & SoundVerified Purchase
Easy install. Just hooked up 3 of these. Each one had to have a factory reset completed before they would join the wifi network.

Good sound. It fills the space.

My issue is that it will not connect to Alex audio groups. Was really hoping to be able to play these in unison through the house.