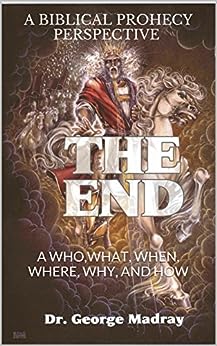 The End: A BIBLICAL PROPHECY PERSPECTIVE - A WHO,WHAT, WHEN, WHERE, WHY, AND HOW Kindle Edition

"You are obviously, a scholar. Your work is comprehensive and thorough." --Carole Carlson, Co-author of "The Late Great Planet Earth"

"As a writer of some 37 Biblical textbooks, I highly commend it for its tremendous amount of research and study." --Rev. Dr. Andrew J. Losier, Founder and President, Christian Literature & Bible Center Inc., Toccoa, GA

"Dr. Madray has had an analytical mind. We all would be wise in studying his book on end times prophecy." --Dr. Greg Pierce, Thd.DM.DB, Lee County, VA --This text refers to an out of print or unavailable edition of this title.

Dr. George Madray graduated Cum Laude From the University of Georgia in 1974, with a B.S.A. degree in Agronomy (the study of the science and chemistry of soils). He then entered the Medical College of Georgia where he received his doctorate in Dental Medicine in 1977, after which he started in the private practice of Dentistry. He is involved in various business activities locally and internationally, from cosmetic manufacturing and theme park development in Georgia, to mining in West Africa. He is an inventor and holds several patents. In 1985, Dr. Madray began to read and study the Bible seriously, with a particular emphasis on creation and prophecy. Since then, Madray has served as a part time dental missionary and actively supports missionaries worldwide. He resides in Brunswick, GA, with his wife, Jeanette, and their two daughters, Mariah and Bethany. --This text refers to an out of print or unavailable edition of this title.

Dr Greg Pierce
5.0 out of 5 stars A recommended read to mediate there on
Reviewed in the United States on September 19, 2015
Dr. George has the analytical mind of a genus therefore sees things in the Scriptures that most overlook. Most others only repeat what they've read in the mainstream teachings of prophesy. THE END is not Clarence Larkin warmed over neither is it shallow sensationalism. George is rock solid and considering this book was written in the '90s he is right on target as verified in today's news. A recommended read to mediate there on.
Read more
One person found this helpful
Helpful
Report abuse
See all reviews
Back to top
Get to Know Us
Make Money with Us
Amazon Payment Products
Let Us Help You
EnglishChoose a language for shopping. United StatesChoose a country/region for shopping.
© 1996-2021, Amazon.com, Inc. or its affiliates