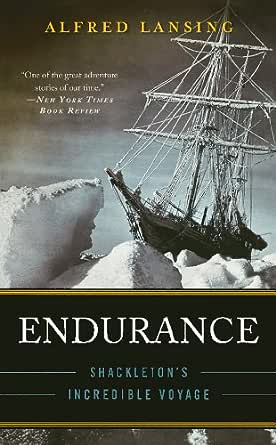 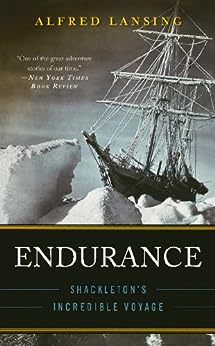 Shackletons Antarctic voyage aboard ENDURANCE is one of the most extraordinary tales of heroism and determination in the history of exploration. Lansing draws on the journals of the crew: their nobility of purpose, their disagreements, their determination, their irrepressible cheer, and their admiration for and unwavering belief in their commander. Simon Prebble gives each a unique voice, from Cockney to Scot. He ambles engagingly through the calmer moments of the narrative and grabs the listener by the lapels when the going gets rough, as it did more times than the ordinary person would be able to endure. Even if you know the story well, Prebbles narration will bring to life the despair, elation, and sheer will of these men to survive, and to triumph, together. M.S.W. Winner of AudioFile Earphones Award © AudioFile 2008, Portland, Maine-- Copyright © AudioFile, Portland, Maine --This text refers to the audioCD edition.

'A superb account of the greatest survival story of our time' - Chris Bonington The story of Ernest Shackleton's epic journey to cross the Antarctic overland has now been turned into four hours of gripping television with Kenneth Branagh playing Shackleton.

Shackleton's mission failed, but the resulting adventure became one of the most celebrated accounts of man's survival against unbelievable odds.

In August 1914 the Endurance set sail for the South Atlantic. In October 1915, still half a continent away from their objective, the ship was trapped, then crushed in the ice. Twelve hundred miles away from land, drifting on ice packs, Shackleton and his men survived the next five months on a diet of dogs, penguins and seals. When the ship eventually sank they were forced to escape by lifeboat. Shackleton then travelled another 850 miles in an open boat across the stormiest ocean in the world to reach help. Every single man got home safely.

Miraculously, throughout this ordeal, the expedition's photographer, Frank Hurley, protected his negatives and photographs from destruction. It is these extraordinary photographs that are among those produced in this illustrated edition of Alfred Lansing's harrowing and inspiring classic. --This text refers to an out of print or unavailable edition of this title.

In the summer of 1914, Sir Ernest Shackleton set off aboard the Endurance bound for the South Atlantic. The goal of his expedition was to cross the Antarctic overland, but more than a year later, and still half a continent away from the intended base, the Endurance was trapped in ice and eventually was crushed. For five months Shackleton and his crew survived on drifting ice packs in one of the most savage regions of the world before they were finally able to set sail again in one of the ship's lifeboats. Alfred Lansing's Endurance: Shackleton's Incredible Voyage is a white-knuckle account of this astounding odyssey.

Through the diaries of team members and interviews with survivors, Lansing reconstructs the months of terror and hardship the Endurance crew suffered. In October of 1915, there "were no helicopters, no Weasels, no Sno-Cats, no suitable planes. Thus their plight was naked and terrifying in its simplicity. If they were to get out--they had to get themselves out." How Shackleton did indeed get them out without the loss of a single life is at the heart of Lansing's magnificent true-life adventure tale. --This text refers to an alternate kindle_edition edition.

Alfred Lansing as a native of Chicago. After serving more than five years in the Navy, he enrolled at North Western University, Illinois and majored in journalism. Until 1949 he edited a weekly newspaper in Illinois. He then joined the United Press and in 1952 became a freelance writer. Endurance was his first book. He died in 1975. --This text refers to an out of print or unavailable edition of this title.

'thoroughly attention-grabbing' THE TIMES --This text refers to an alternate kindle_edition edition.

"Endurance is one of the most gripping, suspenseful, intense stories anyone will ever read." --Chicago Tribune --This text refers to an out of print or unavailable edition of this title.
Read more