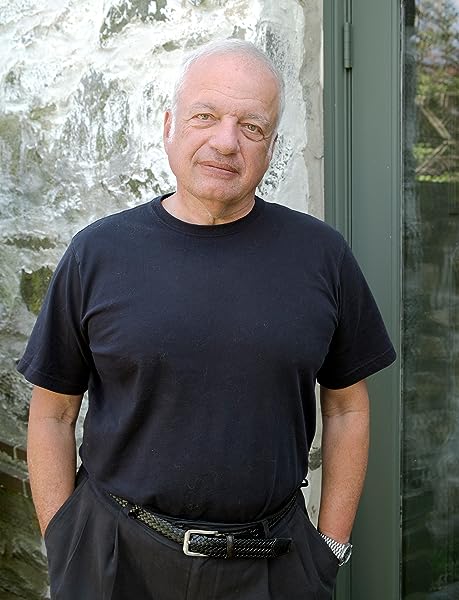 Michael Salcman is a physician, brain scientist, and art critic. Born in Pilsen, he came to the United States in 1949 and trained in neurosurgery at Columbia University. A previous collection, The Clock Made of Confetti, was published by Orchises.
Tell the Publisher!
I'd like to read this book on Kindle

Lee Slonimsky
5.0 out of 5 stars ACCESSIBLE BEAUTY AND MEANING
Reviewed in the United States on March 18, 2011
Verified Purchase
In the awesome collection THE ENEMY OF GOOD IS BETTER, Michael Salcman displays a unique ability to turn almost all of human experience into a poem. His vast knowledge of art, history and science, among many subjects, fuses with a compelling grasp of the essentials of poetry -- imagery, rhythm, music, the subtleties of narrative and, yes, the history of poetry itself -- to create a book full of unforgettable poems.

The poem "A Song of Spirals" is as good an example as any of Salcman's extraordinary abilities merging, like streams of crystal to form a diamond. It is a poem of astronomical observation ("a milky smear/in which dim stars whirl"), religious reference ("Shiva's arms"), metaphorical imagination ("from star clusters to pine cones/to petals on a stem"), historical awareness (in writing of Leonardo Pisano and rabbits, "In 1202, he wanted to know how many pairs would ensue," the origin of Fibonacci numbers), and most of all, poetic awareness. The latter coalesces in the poem's beautiful final eighteen lines ("Tonight his song of spirals plays in my ear,/in a galaxy of cells hooked like a sea horse"). There is no overstating the skill required to compose a poem so voluminous in its factual background, yet so marvellously and cogently luminous in its pair of pages.

One could write at length of many of the poems in this brilliant volume. "Scenes from a Marriage," "Heat Lightning," and "Turner Sets out in a Snowstorm" are a few poems that any reviewer would be remiss in not mentioning. But in closing let me simply call attention to THE ENEMY OF GOOD IS BETTER as one of the finest volumes of poetry I have read in recent years -- as a poet myself, I read many -- and as a profound tribute to the ideal that poetry, for all its historical convolutions, can still be accessible, direct, and meaningful. For this reader, ENEMY has changed the way I look at the world...and for the BETTER.
Read more
One person found this helpful
Helpful
Report abuse

clarinda
5.0 out of 5 stars Good, better, best
Reviewed in the United States on September 6, 2011
Michael Salcman: Review of THE ENEMY OF GOOD IS BETTER

I am struggling to avoid the now-cliché of neurosurgeon Michael Salcman's surgical skill as a poet. He's a precisionist of words, rhythm, idea, history, family. We know that. And I don't want to venture into the lie about writing poetry which his wonderful title might suggest. Poetry is NOT brain surgery, something this poet does a day-job. Salcman's poetry has always been good, and now it is even better. So I have made a small poem out of wonderful lines, almost randomly chosen, from his latest (amazing) book, a book which will fascinate any reader who has any interest in common with the author's (see above list of what he's so good at, besides neurosurgery).

Read this extraordinary book--whether you "like poetry" or not!--and you'll see that this "extrapolated poem" is true:

If you find the angle at which something
shrinks to nothing, you can get the distance.
A cross of wood, a length of twine and soon

the chill
of white-painted plaster on Seventh Street
cools his skull like ice cream;

I hear him cranking the mimeograph drum,
mixing its violet smell
with the odor of oil in the rails of a slide rule--
an aroma as metallic as a brake in a machine shop,

gathered from coalfields, blooming algae
in silt and debris, trapping oyster and crab
in nitrate and shale, drowning life in life.
The Susquehanna flows past ravaged hills,

penises persist beyond all sense and sensation,
even as they do in life. Not the breasts, however.
Of the brain and the rest there's little more to say--
almost nothing survives but fine powder
and a little bone it wears like a cap.

not a scrap was wasted. This was the life he had to give.

What a life is that of Michael Salcman,poet and artist and surgeon, getting better and better, as witnessed by his latest and finest book.
Read more
Helpful
Report abuse

MW5
5.0 out of 5 stars AMBITION AND THE SELF
Reviewed in the United States on March 20, 2011
In THE ENEMY OF GOOD IS BETTER, Michael Salcman takes us on a journey of self: a self hungry to realize itself to the utmost, to live and hold onto life as completely and as long as possible. The poems in this book are what happens when such a self confronts the world as it is--a world that cares little for the self's ambition.

The book's first section meditates on the self's identity as a child, a Jew, a physician, a father, a son, and a friend. Here is a self determined to succeed, who sees his future as "the implacable application of intelligence" and who daydreams of nothing less than "perfect escape." Yet that same self must endure the limitations of reality: a leg shriveled by polio, the bullying of childhood, a heritage of persecution, and the inability--even as a neurosurgeon--to save his father's aging brain or the lives of family and friends.

In the second section, the self examines and contemplates its models of achievement: writers and visual artists who sought or achieved greatness. Beneath this examination, for the poet, lies the dream of acquiring "a place in the universe of wordsmiths" where the self can remain immutable. But the costs and realities of such a dream cannot be ignored: the often oppressive weight of words, the shadows and pain endured by artists as they struggle toward perfection of the work, and the chance that--despite all the struggle--the work will amount to nothing.

The third-section self comes up against even more obstinate realities: time, change, and death. From an elegy to 20th-century Baltimore to a catalogue of what survives of the mummified "long-ago dead," the poems range widely, yet share a common undertone: the knowledge that "all of us / [are] born with an entropy . . ." we cannot escape.

So it goes. The final section begins with the title poem, an admission that, in human relations as in surgery, the striving toward the unimpeachable can lead to a botching of the whole. Here the self that seeks and finds the beauty of love also finds love's imperfection--and the sadness inherent in trying to perfect it. In this imperfect world, love's flaw is that it "never occupies the same moment / of time for any two people."

What, then, of the striving for undying love or fame?

The book's last poem gives us, perhaps, an answer: a painting of a woman by an unknown Flemish artist, an artist whose "bootless fame, free of any personal gain, / has lit [her] face with the grace of anonymity." Here is the self's attempt to come to terms with the fact that its hard-acquired and lovingly tended identity must end--with death's oblivion or, prefigured in section one, its equivalent: "a final music, / the mind set free of memory."

These are good poems; better--they're wise.
Read more
One person found this helpful
Helpful
Report abuse
See all reviews
Back to top
Get to Know Us
Make Money with Us
Amazon Payment Products
Let Us Help You
EnglishChoose a language for shopping. United StatesChoose a country/region for shopping.
© 1996-2021, Amazon.com, Inc. or its affiliates