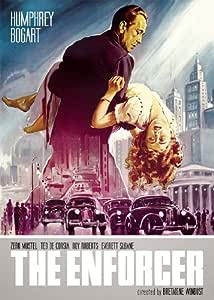 An assistant district attorney reviews his crime-syndicate case after losing his key witness.

4.4 out of 5 stars
4.4 out of 5
177 global ratings
How are ratings calculated?
To calculate the overall star rating and percentage breakdown by star, we don’t use a simple average. Instead, our system considers things like how recent a review is and if the reviewer bought the item on Amazon. It also analyzes reviews to verify trustworthiness.
Top reviews

William de Lay
5.0 out of 5 stars Taut and Brutal Film Noir
Reviewed in the United States on May 10, 2020
Verified Purchase
This was an amazing film to watch. It is almost entirely a series of small vignettes -- flashbacks. It's like a deck of cards, where you turn each card over and reveal a particular violent incident.
It surprises me that you don't hear much about this film -- especially in comparison to The Maltese Falcon or The Big Sleep. I didn't know anyone, personally, who'd seen it. But I am very glad I tracked it down on Amazon, and got a chance to finally view it. Humphrey Bogart is simply outstanding -- you can't take your eyes off him, he's that good. He is entirely convincing as the tough DA who is becoming more and more frustrated, and bitter, about not being able to put vicious racketeers behind bars. It is grueling to watch witness after witness, and accomplice after accomplice, either die from mob assassination, or simply lose all of their moral courage and refuse to testify. You can see why Bogart's character is at the end of his rope. I would be, too.
The entire cast is excellent, and Ted de Corsia (as the mob boss), and Zero Mostel (as a low-level hood), are exceptionally good here. They add fire and brooding menace to the narrative.
I am so glad that I finally got my hands on this movie. It has a knockout screenplay, moody and foreboding photography by Robert Burks, and tight editing. I look forward to re-watching this film again and again. This is a film noir gem.

Molly
5.0 out of 5 stars Killers for hire VS DA Bogart~ 5 stars excellent plot~
Reviewed in the United States on May 29, 2017
Verified Purchase
PLOT: DA spends 9 years on finally nailing a moss boss~

DA Bogart is guarding his one eye witness. The man is nearly out of his mind. When a sniper fails to shoot him he ends up falling off a building. The 9 years of work to nail a mob boss is down the drain. Bogart then reviews 9 years of clues and leads. He discovers 2 eye witnesses who have been hiding in the large city. When one is found DEAD. He continues search to find the elusive witness in hiding.. Along the way he delves into a murder for hire plot and the marsh where the mob dumps it's "enemies". This is an excellent mystery and crime drama. The plot remains a mystery nearly til the end. Bogart is very good as the DA who never quite gives up. Added bonus is the first real look into how the mob smoothly runs a killer for hire business and how it evades the police and functions. 5 STARS~

Svidrigailov
4.0 out of 5 stars an underrated treasure
Reviewed in the United States on December 30, 2019
Verified Purchase
I had never heard of this film, but with my interest in the true facts of "Murder Inc." I purchased it. Quite a good film, which appears to have made on a low budget. All the more impressive therefore in the deftness of its touch. I really liked Humphrey Bogart. The murderer killed by Humphrey Bogart's character aslo appeared in "The Big Sleep" as Lash Canino--something about him is bloodchilling to me.
Read more
2 people found this helpful
Helpful
Report abuse

a. parr
5.0 out of 5 stars Excellent clear picture. Audio clear
Reviewed in the United States on May 1, 2019
Verified Purchase
It’s a Bogart film. It’s entertainment . It’s not true to history of that time period, but I wasn’t looking for historical accuracy. Just wanted to enjoy Bogart and supporting actors. Excellent.
Fun to watch fashion of that time as well as social morays attempted to be portrayed.
Read more
One person found this helpful
Helpful
Report abuse

leonvo69
5.0 out of 5 stars Realism instead of the usual Hollywood fluff.
Reviewed in the United States on July 25, 2018
Verified Purchase
Realistic crime flick with the same problems as law enforcement has today in trying to get a witness to rat out on the Mob. Bogart renews a role he had in The Marked Woman. As in real life, there are no Hollywood endings in either film, making them more like real life and less like the usual fairy tale fluff we usually get.
Read more
2 people found this helpful
Helpful
Report abuse

John
4.0 out of 5 stars Great Bogie Movie if you just buy the DVD and pass on Olive Blu Rays
Reviewed in the United States on July 18, 2013
Verified Purchase
The Enforcer is a wonderful Bogie movie. This film was originally made by Paramount Pictures but many of the old movies today were bought up by "Olive Films". When Olive first started coming out with films that you couldn't get anymore especially on Blu ray I was extremely happy until I started buying their very expensive films. They have no extras on there films, not even a short interview. Maybe a trailer now and then but nothing to get excited about. Their Blu ray movies are expensive and not any better then a decent DVD. When Olive first came out I bought quite a few blu rays but soon understood there was NO BLU RAY QUALITY. Now I reluctantly purchase only the Olive DVDs when I cant get the movie elsewhere. The DVDs are decent and much less expensive than the poor quality Blu rays.
This time around I only bought DVDs for my collection and was satisfied. I bought "The Enforcer, Invasion of the Body Snatchers and Bound" I found all to be of descent quality without the higher price tag.
Now to the review of "The Enforcer". Bogie plays a Thomas Dewey type DA. He is trying to prosecute the boss man of a Murder Incorporated type of crime organization but keeps running into road blocks with people getting killed. Bogie plays it well although Bogie could play Mary Poppins and make it look good. At the end Bogie does what Bogie does well. This is a great movie, you wouldn't be sorry for purchasing this flick if you stay with the DVD.
Read more
16 people found this helpful
Helpful
Report abuse

bakerboy
5.0 out of 5 stars Good
Reviewed in the United Kingdom on July 12, 2020
Verified Purchase
Just what I was looking for, good service, prompt delivery, thank you.
Read more
Report abuse